The House of Chalice by T.T. Escurel - Book Blast and Giveaway 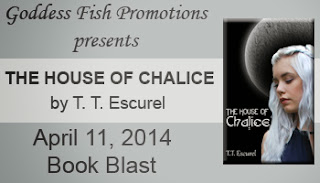 Vartan is lost. His fiancé has just run off with his mortal enemy and now his mother, the Queen of the House of Rose, has disappeared. Venturing into a land with no magic, no army and no fiancé, will he be able to survive?

Lia is in trouble. Clashpeak has a new king who requires a bride, one who has eyes for the young baker’s daughter. During a violent coup, Lia seizes her chance to escape. With every soldier in the kingdom looking for her, nowhere is safe.

An ancient curse lingers in the air, still working its magic. Madness has seized the blood of the royals of the House of Chalice. A battle for power, the likes of nothing Auronia has ever seen, is about to begin…

“Ever since I was a boy, my father would tell me such stories about his adventures. He’d describe this epic battle and detail how he defeated the Raven Queen to save my mother. He’d talk of making pacts with the wood imps and the tree lords. He’d talk of the ancients and how magic was an important part of the land. But,” he says, looking at his reflection in the shining metal, “he never talked to me about what it is like to lose someone.”

Vartan pauses to glance down at the crown of my head, all that he can see of me in the tiny, dark space. I give him no sign that I am listening, yet he continues.

“That’s the one thing we can’t escape, magic or no magic: Loss. Death is one thing. Death I can handle. My life is my own and hopefully my death will be glorious, but still, it will be my death. Loss… Loss ripples out, bashing against the people you love like waves crashing on rocks. It wears them down, turning them to dust and carries them away into a vast sea of nothingness.”

Another pause. He holds his blade to the light. “I saw what losing my mother did to my father. I chased her here, not just to find her for myself, though I desperately wish to know she is alive and safe. It’s my father, you see... I’ve seen your sorrow before. He wears it, curling up in it like a cloak in the dead of winter, but instead of keeping him warm, it only freezes his heart. I can see him becoming bitter and cruel. Without her, we will fall apart. I can’t let that happen. I love my kingdom too much. I love my mother too much. And, above all, I love my father too much to watch him do it.”

He sheathes his sword and grabs me in his arms.

“I know that you want to give up. It is painfully hard to carry on. I may have had an entire kingdom relying on me, but I felt alone in my loss. The thing is…” he pauses, furrowing his brow as he searches for the right words. “…I think the hardest thing to do is to continue on. To die for them would be too easy. Living for them… continuing on… that is the hardest thing of all.”

“So why should I?” I snap, turning away. I can’t bear to look at him. His words hurt me more deeply than my own pain. “Why not let Baston take me? Why not fling myself from the tower window?”

“Because,” Vartan says, resting his hands on my shoulders, “that isn’t the kind of life your parents wanted for you.”

“What do you know about what my parents wanted?” I growl.

Silence. I feel a twinge of guilt, but I can’t get past my own selfish need to lash out at him.

I lift my head and our eyes meet. His words are there, trapped behind those green eyes.

Science Fiction/Fantasy writer in Southern California where the sun shines, the waves roll in and the roads become a backdrop for an apocalypse movie every time the word "precipitation" is mentioned.

Where did you grow up, and how did this influence your writing?

I grew up on a sailboat. That did something odd to my imagination, I think. There is a certain type of surreal serenity that comes with living aboard a boat. That undercurrent seems to run through all my books, even though most of my characters have far more conventional backgrounds. Growing up on a boat helped teach me a stable world evolves not from your environment as much as from your perspective. My books are full of strange worlds and even stranger people, but all my main characters seem to have that grip on reality despite being dropped in the heart of chaos.