The Aerenden Series by Kristin Taber - Virtual Tour and Giveaway

This post is part of a virtual book tour organized by Goddess Fish Promotions. Kristen will be awarding a $25 Amazon GC to a randomly drawn grand prize winner via the Rafflecopter at the end of this post, and audiobook will be issued to 10 runner-up winners. Click on the tour banner to see the other stops on the tour.

Book One: The Child Returns

Seventeen-year-old Meaghan has no idea her perfect life has been a lie — until she witnesses her parents’ brutal murders at the hands of red-eyed creatures.

After nearly sharing their fate, she escapes with her best friend, Nick, who tells her the creatures are called Mardróch. They come from another world, and so does she. Now that the Mardróch have found her, she must return to her homeland of Ærenden or face death.

Left with little choice, she follows Nick into a strange world both similar to Earth and drastically different. Vines have the ability to attack. Monkeys freeze their victims with a glare. Men create bombs from thin air. Even Meaghan’s newly discovered empath power turns into a danger she cannot control.

But control becomes the least of her worries once the Mardróch begin targeting her. When Nick confesses he knows the reason they want her, she learns the truth behind the kingdom's fifteen-year civil war — a long-buried secret that could cost Meaghan her life.

THE WALLS fell in first. A flash of light and smoke came next. Or could it have been the other way around? It happened so fast, she could not remember. The air smelled funny, like when Papa put out the fire before bed. It filled her mouth and her nose. It stuffed her lungs and clogged her breathing. Then it turned thick and black so she could not see. She coughed. She tried to stand, to run, but her legs sagged beneath her. Tugging on a curtain, she pulled three times before she grew tired of toppling over, and crawled toward her bedroom. She called for her mama, but heard only the sound of distant screams through the smoke. None of them was Mama.

“Mama? Mama?” she cried again, feeling her way along the floor. Her fingers brushed a rug, soft and cool compared to the stone floor. A glowing fire consumed part of the room, heating the stone. It crept toward her. Fires hurt. Papa had told her she should not touch them. Sometimes she thought about trying to see if he was right, but she did not want to try with this one. It seemed angry. Its flames popped and snarled.

The couch began to glow, and then disappeared as the fire swept over it. It folded in half, crashing to the floor with a loud bang. She yelped. Tears stung her eyes and wet her cheeks. Her arms shook. Her legs trembled. She backed away, and found the table that usually stood in the middle of the living room. It must have toppled over too. It lay on its side next to a body that looked like Mama.

Several months after Meaghan’s return to Ærenden, the kingdom’s war has taken a turn for the worse. The Mardróch army hunts the new King and Queen, destroying villages in its wake. And Meaghan and Nick, training for battle in their remote section of wilderness, are far from safe. Danger hides in shadows and behind innocent faces. Allies become foes. Each day is a fight to survive. But in the end, only one threat matters. And it’s a threat they never see coming.

THE WORLD streaked past, brown bark and evergreen mixed with the dirty sludge of winter. Meaghan leaped over the remains of a fallen spruce, and then dodged around a thorn bush. Her stride never broke. An ice patch appeared in front of her, pressing red and orange leaves into the ground, and she veered left to avoid it. She had almost missed this one, though heightened adrenaline had saved her at the last moment. She could not fall. She could not slow. Her life depended on it.

Wind burned her cheeks and whipped her hair behind her. She ignored it. She also ignored the way her breath seared her lungs. She pushed harder, further than she had before. And she focused, straining her ears and eyes. An attack would come soon. She expected it, though she wished she had Nick’s sensing power to warn her when it neared. Without it, she had to rely on her training alone. She hoped it would be enough.

Up ahead, vines hung motionless across her path. They could be harmless, but she could not take the chance. Without changing her pace, she grabbed a stick from the ground and threw it into the curtain of green stretching in front of her. The vines reacted, snapping and curling around the branch until it crumbled into splinters. She swerved off the path, circled around the creeper vines, and then hurdled when she realized a log blocked her path. An inch shy of clearing it, she caught her foot on a protruding branch.

She hit the ground and rolled before springing back to her feet and pushing forward once more. Her ankle ached where she had broken it months before. Cold weather often brought a familiar pang to her old injury and tripping had increased that ache, but she could not allow it to stop her. She tightened her arms at her sides, increased her speed, and set her eyes on her goal—a white flag. Safety.

Separated and on opposite sides of the kingdom, Nick and Meaghan face different pursuits which could change the balance of power in Ærenden forever.

While Nick trains the villagers to be soldiers, Meaghan and a small rescue party venture into Zeiihbu to find Faillen's young son, before Garon can use the boy's power to destroy those still fighting against his rule.

Everyone knows Meaghan could be on a suicide mission, but when Nick stumbles upon a secret concealed in one of the southern villages, he realizes that Garon might not be Meaghan's greatest foe. The enemy most likely to kill her is someone who has also promised to keep her safe. 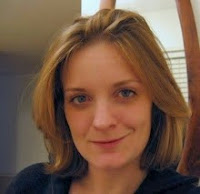 Kristen spent her childhood at the feet of an Irish storytelling grandfather, learning to blend fact with fiction and imagination with reality. She lived within the realm of the tales that captivated her, breathing life into characters and crafting stories even before she could read. Those stories have since turned into over a hundred poems, several short tales, and five manuscripts in both the Young Adult and Adult genres. Currently, Kristen is completing the five-part Ærenden series from her home office in the suburbs of Washington D.C.

Amazon
Barnes and Noble
a Rafflecopter giveaway
Posted by Books in the Hall at 5:43 AM