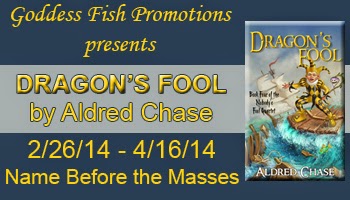 Aldred Chase is visiting with us today as part of his virtual book tour for hisYA book, Dragon's Fool.

Aldred will be awarding a $25 Amazon GC to a randomly drawn commenter during the tour.

Why Middle Grade fiction? What draws you to it?

The stories can be inventive, humorous and playful, while at the same time they can tackle big, important issues. Children at middle grade age are full of potential, and it’s exciting to write stories about characters that are discovering who they are in the world.

My favorite books were Tolkien’s ‘The Hobbit and ‘The Lord of the Rings’. The feeling of having such a richly imagined new world open up inside my head was exhilarating. I loved all of Roald Dahl’s children’s books, especially ‘Charlie and the Chocolate Factory’. My favorite series was the ‘Just William’ books by Richmal Crompton. I liked the way that William, with the best intentions in the world, always managed to get himself into trouble, and I think a little of that has rubbed off onto my hero Keth.

I wanted to be a writer because I loved reading and I thought it would be an amazing buzz to be one of the people who created these stories. When I grew up I did become a writer but I wrote computer programs. It was satisfying work and financially more secure. However my young self had it right, writing stories is a huge buzz and I feel extremely lucky to be living my childhood dream.

I like to visit foreign countries and my favorite form of travel is any long distance train journey. I get two bites at the cherry when I travel because I enjoy the planning almost as much fun as the actual trip. I like to read on my journeys and I love my Kindle as it saves me dislocating my shoulders lifting heavy, book-filled bags.

I have a terribly sweet tooth. I eat choc-chip cookies as if I’m inhaling them. If I had to pick a favorite it would be apple crumble with ice-cream or chocolate fudge cake with caramel sauce or baked cheesecake with blackcurrant topping. I’ll have to stop now as I’m drooling all over my keyboard.

My favorite TV show was the original Doctor Who and my favorite Doctor was Tom Baker. I’m also a big fan of the rebooted version and I can’t wait to see where the show will go with the new Doctor.

Ratty from Wind in the Willows because he is such relaxed company and we could go boating on the river after dinner was finished.

Gandalf from The Lord of the Rings because he has a sly sense of humor and he would have lots of wonderful stories.

Nanny Ogg from the Disc World because she knows how to make any dinner party a roaring success, but please don’t ring me the morning after.

Willy Wonka because he is bringing the dessert. Did I mention earlier that I have a terribly sweet tooth?

Keth has become the most powerful person in the city of Russett. He is both Prince Dawyn's fool and his most trusted adviser. The secret of Keth's success is listening to the tart, sour comments that the turnip on the end of his fool's stick pours into his mind, which no one else can hear.

When an earthquake strikes Russett, it is only the first in a series of disasters to devastate the city. Superstitious folk say that these are signs that a dragon is coming and only the golden prince of legend can save them. Keth's turnip tells him that these are only natural events and dragons don't exist, but he can use peoples' fears to his own advantage.

In the ruined city, Keth has to decide who he will trust and what he will believe. The fate of his friends and the survival of the land depend on the choices he makes.

Dragon's Fool is book four in the Nobody's Fool Quartet, the gripping climax to a tale of comedy and adventure.7:56 PM 1/14/2014

The roar of the water was now deafening. It had wiped out all the other sounds. Urchin and Grub had got hold of Wilbert’s arms and Smiley and Bead were clinging to them to stop them toppling over, but Wilbert was too heavy for them to drag up. Wilbert’s foot pushed down against my shoulder but he didn’t have the strength to boost himself up. My last view before the water engulfed me was going to be of Wilbert’s bum.

I had an idea. I raised my turnip stick. I wedged the turnip head against Wilbert’s backside. I shoved hard. Wilbert shot up. The others hauled him on to the roof tiles. I climbed up after him.

“I hate you,” Turnip said inside my head. “I’m glad you’re going to drown.”

I scrambled onto the corner of the roof. Urchin, Grub and Smiley were crawling up to the ridge of the roof. Wilbert was lying, gasping like a stranded fish and clutching his bum. Bead was kneeling over him, checking he was okay.

From up here, I had a much better view of the wave than I wanted. A great wall of water swept towards us with terrible purpose. It ripped up the wooden pier beyond the stone quay and tossed the timbers high in the air. It blasted over the top of the city wall and collapsed the buildings on the other side as though they were made of paper.

Aldred Chase’s first experience of fantasy fiction was reading ‘The Hobbit’ at school, and he has been hooked on the genre ever since. His favorite places for writing are cafes and park benches, but he does most of his work sitting at his desk. His best ideas come to him when he is travelling by train or walking by the sea.

Aldred has just released Dragon’s Fool, the final installment of the Nobody’s Fool Quartet, a tale of adventure and comedy with some scary bits, aimed at children age 9 to 12. He vacated his desk to give his brain and keyboard a rest, but during a recent train ride the idea for his next novel arrived, and the desk is calling him back.

Dragon’s Fool can be purchased at:

For readers who would like to begin the series from the beginning, Apprentice Fool, book one of the Nobody’s Fool Quartet, is available free at Amazon in the USA, Canada, and UK, Smashwords, Apple, Kobo and Barnes and Noble. I’ve included the links below: