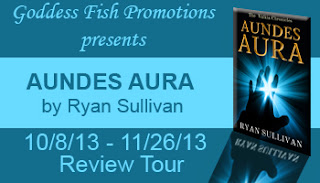 This post is part of a virtual book tour organized by Goddess Fish Promotions. Ryan will be awarding a $25 Amazon GC to a randomly drawn commenter during the tour. Click on the tour banner to see the other stops on the tour.

Since their father was taken to the dungeons of the capital city, Eoin and Saera have had to fend for themselves. If Eoin can find an apprenticeship in the capital, they can work on freeing him.

But Saera is afflicted with an evil goddess's light, and when her Aura flares up in the middle of the street, the power-hungry Church Regency are quickly on their heels, keen to eradicate the threat.

With more than the Regency after them, their only hope is to relinquish the Aura. Making alliances they would never have dreamt of, they find themselves swept up into a struggle against the kingdom they once called their own.

This is a very exciting book! I'm so glad it's part of a series because I really liked these characters and this world, and I can't wait to visit there again.

Often people dream about having special powers, but Saera knows that having special powers aren't always what it's cracked up to be--especially in their kingdom. The Church Regency tries to hunt down everyone who has been gifted with one of the Auras to destroy them. Fortunately for Saera and her brother, there are other kingdoms that will take them in and protect them--the trouble is getting there first.

On their way to safety, Saera and Eoin meet other people who hold the Auras of the other gods--and the adventure is on! There's also a touch of romance which is nice.

Thanks, Ryan, for a great read!! 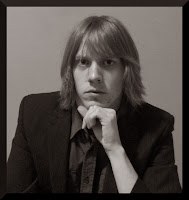 Ryan Sullivan discovered his passion for writing at the age of seven. Drawn to the limitless worlds of magic, he never stopped. Ever since writing his first collection of stories, he knew he wanted to be an author. He is currently studying music, and teaches piano. He lives east of Melbourne, Australia.