Initially, when I was writing my other novels and stories I would craft characters that had these really dynamic and significant events that happened in their back-stories that were driving their current motivations. Since the characters were in their early and mid-twenties most of these events were taking place during their high school years. So, when the story of Bad Reputation came to me it wasn’t much of a shift to focus on these influential years. One of the most compelling reasons for this focus is the natural setting. During these years emotions are heightened, there are new experiences every day, relationships are more awkward and complicated and as a teen everything feels uncertain.

When I was younger I read all of the classics and got quite a few pizzas out of the Book-It program that kept me reading everything and anything. Out of all those I would say that aside from the classics, Sherlock Holmes and Goosebumps were my favorites. There’s nothing like a good mystery with an unexpected twist.

Rather entertainingly, in the second grade my teacher asked the same question. I didn’t have an answer then and in all the years since I still haven’t really ‘found’ an answer. I love adventure and travel and always learning something new. It’s how I ended up where I am today. As Benjamin Franklin said… “Either write something worth reading or do something worth writing…”

Bad Reputation, it's the last day of school and gossip says someone is going to die. The weight of secrets will have a costly price…

Sure it would be fun to dedicate a summer to traveling the globe and seeing all of the different countries but in truth, vacation for me means a chance to relax. In all of my travels the one thing that has always stuck with me is the New England coast. There’s nothing quite like it, especially off Marblehead, MA or Maine. So, the perfect summer vacation for me would be lounging on the coast all summer long.

The first invitee would have to be Scott Fitzgerald’s Jay Gatsby because he would make for an excellent founder of the feast but also because he knows how to throw a party. He would also have great insight on any topic of dinner conversation. The second guest would have to be Doyle’s Sherlock Holmes because not only is he a brilliant detective but he would also be the most amusing counter to Gatsby. You know they’ll get into an argument at some point. To keep conversations really entertaining the third guest would have to be Lovecraft’s Professor William Dyer to regale guests with stories of adventure and the darker things that remain unknown. The final guest would have to be someone to really keep the boys on their toes, so Sara Paretsky’s Vic Warshawski is the logical choice. She wouldn’t hesitate to question Dyer’s stories or doubt Gatsby’s motives and call them out on it. Dinner would be the most entertaining, confusing and contemplative evening ever.

I’m going to cheat. Since my music constantly changes with whatever I’m writing my current playlist for the North Shore series consists of a lot of influential songs.

Favorite class in high school, hands down was Business English. Not only was it putting together the yearbook but, it was also the weekly student newspaper. I got the chance to wander wherever I wanted on stories, taking photos and for a week each year we could drive around town getting the advertisers for the yearbook. It was also a great get out of trouble card too when a teacher would ask where I was. “Out on a story.” ;-)

The North Shore Sheriff's Department has a bit of a problem. Someone contacted the local radio station last night and left an alarming confession.

Logan and his friends may be gossiping about it but their only concern is getting through the last day of school before summer vacation. After all, tonight is the party of the year. No one wants to miss it.

But the weight of secrets will have a costly price…


Through the trees I could just barely make out the practice field ahead of me. Another little secret Sara had let me in on. The truant officer tended to make his rounds on the half-hour and kept a close eye on the path through the woods to the parking lot. If I came in from the practice field, no one would bat an eye.

“Then again,” I said aloud.

I thought about grabbing my jacket, but it really wasn’t cold enough. My phone on the other hand, I needed. Checking the screen, it was only a little after nine. Tardy, but not something that would stand out.

There was still a chance to ditch the entire day. My phone gave a brief buzz of notification. I checked it to find a text waiting. It was Hailey again.

I groaned. She was pissed at me. If I bailed, not only would Sara and Mom freak on me, Hailey would jump down my throat. I could avoid them, but I needed to take Hailey to the party tonight. I could just stand her up. I let out a heavy breath. I wanted to go though, and if I didn’t take her, she would still find a way to get there. It was just better to deal with her now than to put it off till the end of the day. Maybe she wouldn’t be too pissed.

“5 Min” I texted back and started walking towards the practice field. Old leaves and branches crunched underfoot, keeping my mind off the fact that Hailey was going to rip me a new one, and I had no clue what she was going to want.

The girl could hold a grudge better than anyone I’ve ever known.

I emerged into the open near one of the maintenance sheds. Why was I still with Hailey? She was constantly pissing me off, and she didn’t even hear me most of the time. I turned right to follow the maintenance path. I dumped Jamie for less than what I was putting up with now. I opened the texts from Hailey to scroll back. There had to be some reason.

A few days back through the texts was all I needed as a reminder. It was a ‘selfie’ shot from Hailey angled down at her. She was giving me a playful smile. Straight, platinum blonde hair, a tight low-cut top and a teasing attitude, she was hot. Knowing how she felt silenced any objections my brain could come up with at the moment.

I smiled to myself.

Tucking the phone in my front pocket, I crossed into the parking lot. I couldn’t see anyone over the cars but I didn’t need to push it. I quickened my pace towards the end of the science building.

At the far end of the concrete and faux wood building I walked around the corner to the concrete steps and black railing. I took one last breath of the free air before climbing the stairs to the heavy fire-door. It was always left unlocked so teachers could duck out to the parking lot or students could get to the athletic fields. The cold handle slipped from my grasp as I tried to open the door. I finally noticed the grease and dirt on my hands. 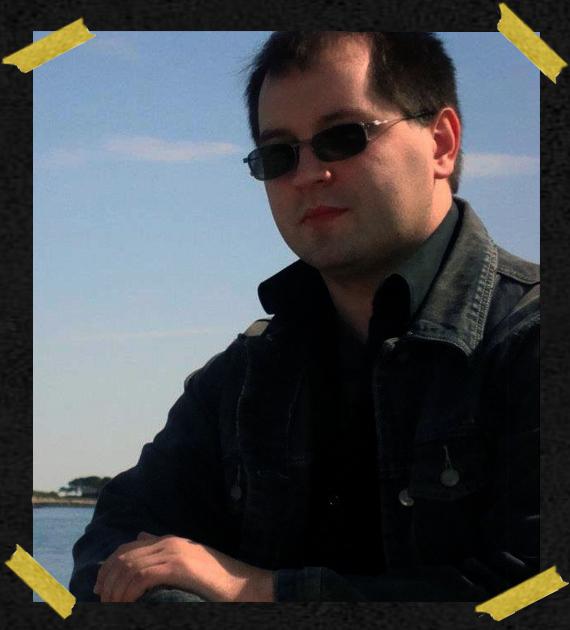 Born in California, I have spent most of my life traveling throughout the US. I draw inspiration from my many adventures, turning my strange reality into fiction.

Over the years, I've found myself in many unusual situations, ranging from hanging off an 80 foot cliff-face in New York, to sailing off the coast of Salem, Massachusetts. I have had an opportunity to work at an archaeological excavation, and have even reported from the middle of a police stand-off.

When a teacher asked me in the second grade what I wanted to be when I grew up, I didn't have an answer. To be honest, I still don't know. I let my characters make that decision for me.