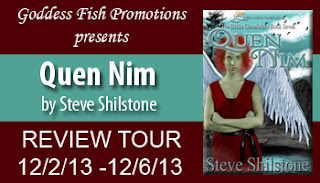 This review is part of a virtual book tour organized by Goddess Fish Promotions.

Steve will be awarding a $10 Wild Child Publishing GC to a randomly drawn commenter during the tour.

You can see the rest of the stops by clicking on the tour banner.

Nimble Missst, shapeshifting Cloud Castle City Princess, rages against her betrothal to the ridiculous Blossom Prince, Zootch. Reluctantly bound to duty, she agrees to go through with the marriage, but always in her snapjaw mind she devises plans of escape.

On the day the vows are to be exchanged, her startling violet eyes flash in disbelief when she learns that Zootch has fled Blossom in terror, saying he’s always been afraid of Nimble Missst.

Newly enraged, she sets off in hot pursuit of the Prince. It becomes a game of hide and seek, pitting the snapjaw mind of Nimble Missst against the surprising cleverness of Zootch.

Nimble Misst is a shapeshifting princess... but not the sort who turn into wolves or other creatures. She can turn into clouds--- after all, she's a princess from Cloud Castle City. And, there is an arranged marriage in store for her--with the Blossom Prince, Zooch.

She has a snapjaw brain and wants to escape the marriage until the tables are turned and she discovers that Zootch doesn't want the marriage any more than she does and... in fact, is afraid of her and has run away.

This series is so much fun--it's enjoyable discovering other facts about it through the different chronicles! This particular story takes place long before the material in the first book... and is, in fact, a story told by Bekka in her unique way. Nimble comes to realize that, instead of really running way, she is engaged in a battle of wits, because Zooch also has a "snapjaw brain" only he kept his hidden.

The story plays out as the Zooch tries to outsmart Nim by leaving clues.. but staying one step ahead of her. And, there's a hidden player in this game.

You don't need to read the other books in the series to enjoy this short volume, but be aware that the language and the way the stories are written have it's own rhythm and may take you awhile to get comfortable with if you aren't familiar with is. But, the stories are, as Nim would say, ridiculously good. And, I hope there are more stories about Nimble's family... I haven't read all the books in the series and need to double check on that.

Steve Shilstone is a benign elderly hippie lite loon living in Northern California. He fancies himself to be a prosemaker and a dadaist with a small d who enjoys hanging out at the intersection of Humor and Nonsense. In times ago, he was a youth baseball coach for 25 years, a distributor of mail for the United States Postal Service, a stock associate employed by a no longer with us department store, a cartoonist of little note, a painter of littler note, and an anthropology student at UCLA.