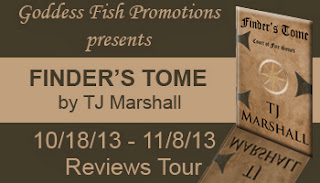 This review is posted as part of a virtual book tour organized by Goddess Fish Promotions. TJ will be awarding a $25 Amazon GC to a randomly drawn commenter during the tour.

The Deadly Gates have been opened. An exiled prince plots the return of trolls into FourPosts.

Jacob “Feather” Moore is given an ancient book to read. It shows him where he can find Mandrake’s Key, an artifact with the power to lock the Deadly Gates.

Forced into a race for his life and the future of FourPosts, Feather is pursued through caverns, deserts and foreign cities. Lost, hungry and alone, the boy struggles to reach the Great Hollow and the portal it holds. His only hope lies in the visions given by the book called Finder’s Tome.

This was a really neat book... Feather was my kind of guy--he loves to read! Fortunately, he has a friend who keeps him supplied. Turns out, though, the latest book this friend gives him is magic--and only Feather can "read" it.

I was a little perturbed by Feather's "adopted father" and mother at the beginning of the book--I thought the father was too harsh on Feather, but as you read the book you come to understand the conflicts his parents go through.

I liked the idea of a book that gives visions--Feather has to not only figure out what they mean, but had to go through many adventures in order to find Mandrake's Key and save his world. I also loved his traveling companions and helpers... a great beginning to what promises to be an awesome series.

In this scene, Feather had fallen asleep in front of a fire the morning after a fight that ended with him killing a man.

Feather flinched, backing up a step.

A disembodied face with a black goatee loomed over him. Steel blue eyes glared as the man’s lips twisted into a grimace.

People surrounded him, some waving overfull tankards, splashing its contents, while others danced to a lute player’s tune. They appeared and disappeared in an instant, each pointing and laughing.

Feather’s heart beat wildly. He searched for a way out, but a thick haze of pipe tobacco choked him and obscured his vision.

A huge body formed under the floating man’s face. His arm dripped blood. He charged across a black floor, and toppled over Feather, weighing him down like a boulder.

Feather screamed again, struggling to be free of the dead weight. Breathing in short bursts, he managed to roll the man over. His knife was buried in Darrius’ chest.

The people stopped laughing. They sneered at Feather and shouted, “Murderer!” The lute player waved his instrument like a club as the crowd closed on him.

“Feather, this way!” The voice was distant, it’s source nowhere to be seen. “Feather! Feather!

Feather jumped, shoving a hand off his shoulder.

Shaking his head, Feather tried to dismiss the lingering vision.

“You were screaming.” The old man hugged Feather. “Are you okay?”

“Oh, sorry.” He rubbed his eyes. “It must have been a nightmare.” 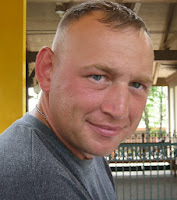 TJ Marshall spent the majority of his adult life in the US Army, and during this time, had traveled to more than two dozen countries as well as visiting nearly every state. A veteran of both Desert Storm and the Global War on Terror, TJ finally decided to retire and start a new life in Texas with his two daughters. A newcomer to writing, Finder’s Tome is TJ’s first novel, but in the short time he’s been writing, he has produced countless short stories, one of which was the winner of an internet writing contest hosted by First Page Last Page. TJ is currently working on a second novel titled The Struggles due to be released in summer 2014.