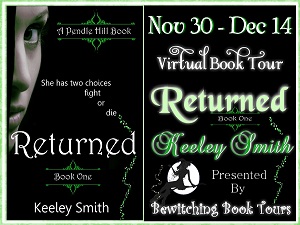 Please welcome author Keeley Smith on her tour with Bewitching Book Tours today for her paranormal YA"Returned". The author answered a few questions for me, so sit down and get to know Ms. Smith, then enter her Rafflecopter giveaway, below to win a copy of "Returned" for your very own!

What books were your favourite as a youth and why?

I remember receiving a set of books at a very young age for Christmas. The set included Peter Pan, What Katy Did, A Christmas Carol and other great classics. I devoured the books and from that moment on my love of books has grown. I will only pick one book, if I picked many this question would take up considerable space. This book would be the Malory Towers series by Enid Blyton. They are school boarding books that came before Harry Potter, minus the magic of course, but they are still great.

Oh gosh, I have such a sweet tooth. In summer it would always have to be strawberries and ice cream. Winter treats are different; I love chocolate, so a sweet treat for me would be warm chocolate fudge cake with custard.

I would love to have superhuman speed. That would mean I could get to work quicker, leave quicker and write my books a lot faster than I am right now. Household chores take too long so they would be a thing of the past too!

That should read books *G*. I have many books on the go right now, Beautiful Creatures is one of the many books, there is also a Lee Child’s book, a Nora Robert’s book, The Twelve by Justin Cronin. I also have the tenth book in the House of Night series on the go.

I would love to spend four weeks touring America in a lovely car. I’ve been to many beautiful places in America but we haven’t done route 66 so we would love to do this.

I would love to meet Tabitha. As scary as she may appear to be, she is rather strict, she is such a strong independent woman who I find very inspirational. She owns a business which is successful, she doesn’t need a man to make her happy, and she’s a witch.

What four literary characters would most like to have over for dinner?

This is a tough question. If you asked me this again in a week I would probably change my mind. But today the four people would be Harry Potter, how could you have a meal without him present? Edward Cullen would be there for a bit of eye candy! Larten Crepsley from Darren Shan books. Larten is also a vampire but he’s nothing like Edward, Larten will actually feed from a human. I thought it would be nice to see the both of them interact. Finally, my last dinner guest would be Myron Bolitar, who is Harlan Coben’s creation. I’m hoping that if Myron is in the vicinity then Win may pay for dinner (he’s extremely rich!)

Do you have a playlist for your current book?

I’m writing Cora’s second book at the moment so there are many songs on my playlist. It depends what is happening in the scene. On my playlist there will be a lot of Green Day, Muse, Michael Buble, instrumental music also helps when I’m writing.

After her reluctant move to a sleepy village in the middle of Lancashire Cora's life is turned upside down when she discovers she is a witch, a very powerful witch. Cora is not just any old witch, she is the daughter of Alizon Device who was one of the most powerful witches of her time.

Dealing with her new found powers is quite a challenge, but when the past she didn't know about unearths new complications in the form of Jack Thomas, her life becomes increasingly dangerous with each waking minute.

Jack also has a secret past, a past that clashes with Cora's.

A confrontation between the two results in a life or death situation. The brutal events of 1612 happened hundreds of years ago, but what Jack and Cora face is a definite déjà vu. The only question is, will their fate be the same as those who perished in 1612?

Keeley Smith is the author of Returned, a new and exciting young adult fantasy about witches. Cora Hunt is a witch, she's been a witch since 1612, since the day her mother was murdered in the infamous Pendle Hill witch trials. Now Cora must learn to control her new power, but with this new power comes danger. Is she strong enough to survive to threat that comes with being the new witch in the village?

Keeley lives in the UK with her husband and rabbit. She has a BA Hons in English Literature and Language from the Open University. When she isn't writing and spending time with her "book friends" she also loves to read and keep fit, by keeping fit she means picking up chocolate and placing it in her mouth, then repeating the process. It's a very good workout!

a Rafflecopter giveaway
Posted by Books in the Hall at 5:30 AM