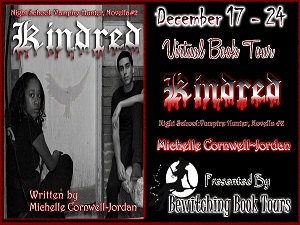 Please welcome author Michelle Cornwell-Jordan on her tour with Bewitching Book Tours today for her Paranormal YA romance "Kindred". She has an awesome Rafflecopter giveaway at the end of the post AND one commenter here at this blog will win an eBook copy of Kindred.

Answer: In YA there’s Magic. I know that Adult novels can also hold a magical element; But YA also holds the element of Hope, newness. There is freshness, a sense of wonder, and discovery in most of the stories in this genre, including my favorite Paranormal. I suppose I always feel as if I am getting a second chance to begin anew, with each story I read or write!

Angel will most likely come into contact with a Vampire that is trying to destroy her, or a member of Wasiki’s (He’s the bad guy) group, who is waiting to possess her. So yeah, she’s better off carrying her books!

As a Teen and Young adult, shoot let’s be real…even now:O) I love the Gothic Romances and Paranormal stories. Any story with a touch of magic and mayhem!

A Writer, I never really believed back then I would, well, actually I will not say that, it was more like…a far out of reach dream, that I would love to experience…I wanted to be a writer, because I love to read and I wanted to create worlds and adventures like my favorite authors did. So, now I really feel as if I am walking, “living” my dreams…I am grateful, because it truly rocks!:)

I would warn the young me of the Pitfalls that I knew would come, make mostly completely different choices, and tell her to not be afraid, go after her dream of writing then…if I had told her all of this, it’s no telling how far I would be now?:)

I know I probably should say something about striving to give healthier items for snacks, but the truth of the matter is, I give out all the gooey, hooey, chocolaty treats! My daughter would have it no other way!

Um, I will say I have a couple weeks left, so I will try and pull it out and get that candy this year!

Shape shifter, with the abilities of the host. Then I could be whoever, and whatever I wish on a given day! Oh! I just realized I have that power already, like so many others…

Although I am fast becoming a fan of the Hunger Games, and it will be my go-to movie on movie nights in the upcoming future, and you will probably see me raving about it on social media…but always and forever Twilight Saga...it was a great romance, which I loved!

#7) I’ve got to see you again- Nora Jones
Video: http://www.youtube.com/watch?v=el9cknEVlc0

#3) Haunted by the Thought of You by Jill Tracy
Video- http://www.youtube.com/watch?v=iyd1XUNQUNQ

There you have it and if you want to listen to the interview with Rock Artist Cecile Monique when I and my co-host Jamie B Musings Interviewed Cecile on our show IndieReview Behind The Scenes internet radio...listen here!  http://www.blogtalkradio.com/indiereviews-behind-the-scenes/2012/11/24/indiereview-behind-the-scenes-w-music-artist-cecile-monique 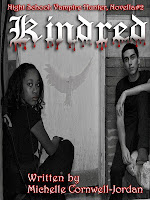 Genre: YA Paranormal
Number of pages: 82

Angel and her friends at Ame Academy, a boarding school for preternatural and humans are back, and they are preparing for battle against the dark forces that kidnapped Angel’s younger brother Jordan. Angel had recently discovered that she was a Hunter and that she alone has a special weapon against her enemies; her blood, which is discovered to be toxic to her enemies. Angel is prepared to use her training and all that is at her disposal in order to save Jordan, even if that means joining forces with the strange and mysterious Rafael, who at their first meeting, she recognized him as the boy she had dreamed about for weeks prior to his arrival at the school. Angel cannot shake the feeling that she knew Rafael before, and is hopelessly drawn to her extremely handsome fellow hunter.

Rafael frightens her, he hints of a secret; another time and another life lived.

Events unfold that provides the answers to who Rafael really is and what they mean to one another; and along with these strange and blossoming emotions for Rafael, along with guilt and fear for her brothers safety; Angel discovers that she is more than just a Vampire Hunter, and that she plays a major role in a ancient prophecy, which she must fulfill by facing an a force so evil that survival is not promised.

But she will face the Dark One, Angel will sacrifice all, if it means saving all whom she loves.

Many questions are answered, but the drama is just beginning…. 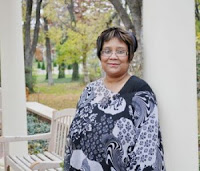 Michelle Cornwell-Jordan is a YA Paranormal Author.

Michelle Cornwell-Jordan is also the producer of the online radio segment IndieReview Behind The Scenes, where she and her co-host Jamie B Musings interviews Indie Authors and Musicians.


a Rafflecopter giveaway
Posted by Books in the Hall at 12:01 AM