This review is done in conjunction with the author's tour with I Am a Reader, Not a Writer. 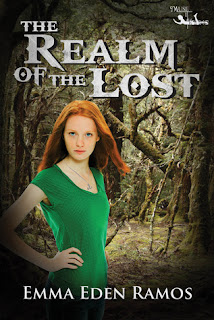 What happens when you die before your time?

Thirteen-year-old Kathleen "Kat" Gallagher has had it with her family. The eldest of three children, Kat feels trapped ever since her parents’ separated and she has had to take on more responsibility than she feels prepared for. Everything changes on a frigid morning in mid-December when an accident propels Kat into unfamiliar territory.

Stuck in the place where people go when they have died before their time, Kat must face obstacles she could never have imagined.

With the help of other young inhabitants of the Realm of the Lost, Kat learns the true meaning of friendship and family.


My Review:  First, I have to say I completely enjoyed the author's voice and skill.  I had no problem reading this story from beginning to end quickly and never had a complaint about the quality of writing in the least.

The characters were vivid and interesting and the setting well created.  But, I had some issues with the storyline itself.  I enjoyed the basic premise behind the idea of The Realm of the Lost.  I thought this version of purgatory was fascinating and original.  But my frustration arose with Kat's journey.  There was very little actual conflict in the story, aside from Kat learning her way around the new world she found herself in.  She didn't have anything to overcome to make her grow, a hero's journey to accomplish.  It had the feeling of "a day in the life" more than a story with beginning, middle and end.  I wanted more:  more depth, more conflict, more growth from our heroine.    Truthfully, this could have (and perhaps should have) been expanded because, as I noted, it was an interesting idea.

Perhaps the target audience (in my opinion somewhere between 8 - 12 year olds) wouldn't have the same problems I did.  There was some excitement and action and certainly things that would appeal to that age range.

Still, my reservations about the story itself aside, I was quite impressed by the author. She absolutely knows her writing and I would be completely open and interested in reading more from her in the future.

Email ThisBlogThis!Share to TwitterShare to FacebookShare to Pinterest
Labels: 2.5 Rating, Emma Eden Ramos, giveaway, I Am A Reader Not a Writer, Middle Grade, Review, virtual tour