Death to the Undead by Pembroke Sinclair - Virtual Tour and Giveaway 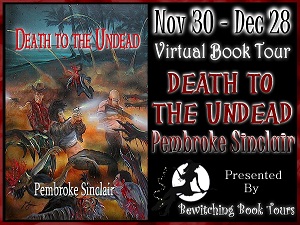 Please welcome author Pembroke Sinclair on her tour with Bewitching Book Tours today for her paranormal YA"Death to the Undead". The author answered a few questions for me, so sit down and get to know Ms. Sinclair, then enter to win a coffee mug, a spiral notebook (2 will be given away), or a complete signed set of books (both Life After the Undead and Death to the Undead) (2 will be given away) by leaving a comment!

I am drawn to YA and Middle Grade because I’m still a kid at heart. I enjoy taking a break from my busy, adult life and just sitting back and having fun. Even if my characters aren’t exactly having fun (after all, fighting zombies is serious and scary work), it’s still outside of my mundane existence. Writing about and for teens allows me to go back to those times when I was carefree. It’s a nice escape.

My favorite books as a teen were Christopher Pike books. I loved his writing style and the situations he put his teens in. His use of the supernatural and horrific were fantastic! He really influenced me as a writer.

I have several, I can’t narrow it down to one. I’m a big fan of Crunch bars, but I also really like brownies (without nuts) and cinnamon rolls. Donuts are fantastic as well.

Much to the chagrin of my husband, and probably the kids in the neighborhood, I handed out temporary tattoos this year. I figured they’d be getting tons of candy elsewhere, why add to it? Plus, we only had probably 8 kids come to the door, so I didn’t want to be stuck with leftover candy! My kids brought home enough for an army!

The ability to multiply myself so I could be in several different places at once. That way, I could take care of all the things that needed to be taken care of during the day and still find time to write!

Currently, I am reading the new book by Christopher Pike, “Witch World.”

My favorite class in high school was English. I’ve always loved to create stories and write, and I had wonderful teachers who encouraged me. I wouldn’t write now if it weren’t for those teachers.

Death to the Undead by Pembroke Sinclair
Genre: YA horror
Publisher: eTreasures Publishing
Number of pages: 286

The battle that began in Life After the Undead continues.

Tough teenager Krista escaped to the safety of Florida after her parents were killed by the zombie horde. She united with General Liet, a distant cousin, and moved with him to North Platte to help build a wall to keep the zombies in the West. Krista fell in love with Quinn, a survivor and fighter from the zombie-infested wildlands of the West, and together they freed the garrison at North Platte from the power-hungry Liet.

But zombies aren’t the only enemy they have to face...

Now, North Platte is free, but Liet was not the only one using the zombie apocalypse to control their people. Florida is ruled by five ruthless Families, who use intimidation and the threat of the zombie horde to coerce their populace. Krista and Quinn hatch a desperate plan to run guns into the state and help the people revolt. Krista and Quinn, labeled as rebels run for their lives when the Families attack North Platte. The Families want them captured, the zombies want to eat them, and other survivors want them dead. Caught in between powerful forces, they must survive long enough to devise a new plan and put it into action, all while trying to solidify their new relationship and trying not to self-destruct in the meantime. 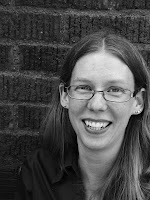 Under my real name, from March 2008 to January 2011, I wrote scientific articles for Western Farmer-Stockman. I have a nonfiction book, Life Lessons from Slasher Films, scheduled for release in July 2012 from Scarecrow Publishing (an imprint of Rowman and Littlefield).

I have my Master’s in English, and I am a freelance content editor for Musa Publishing, as well as a former content and line editor for eTreasures Publishing.