The Eye-Dancers by Michael S. Fedison - Book Tour and Giveaway

This post is part of a virtual book tour organized by Goddess Fish Promotions. Michael will be awarding a $25 Amazon GC to a randomly drawn commenter during the tour, so leave a comment or ask him a question. You can click on the tour banner to see the other stops on the tour. 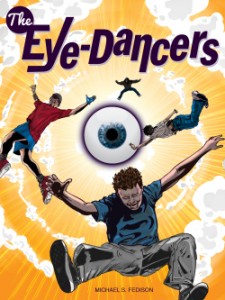 Seventh-grader Mitchell Brant and three of his classmates inexplicably wake up at the back edge of a softball field to the sounds of a game, the cheering of the crowd. None of them remembers coming here. And as they soon learn, “here” is like no place they’ve ever seen. Cars resemble antiques from the 1950s. There are no cell phones, no PCs. Even the spelling of words is slightly off.

A compulsive liar, constantly telling fantastic stories to garner attention and approval, Mitchell can only wish this were just one more of his tall tales. But it isn’t. It’s all too real. Together, as they confront unexpected and life-threatening dangers, Mitchell and his friends must overcome their bickering and insecurities to learn what happened, where they are, and how to get back home.

The answers can be found only in the mysterious little girl with the blue, hypnotic eyes. The one they had each dreamed of three nights in a row before arriving here. She is their only hope. And, as they eventually discover, they are her only hope.

And time is running out.

He heard the others, still talking behind them. Ryan was telling another of his dumb-blonde jokes. Crickets played their fiddles from hidden places in the grass. A hoot owl called out, and another, farther away, answered. Duss, now a vague form in the dark, still stood at the fence, looking through the gap at the now dormant grill. And he knew, he was certain, that he could talk to Heather, this beautiful girl from a place so far away. She would understand the way he felt about his parents. Maybe she would understand the way he felt about a lot of things.

But it didn’t matter. Because he didn’t want to stumble over his words, his tongue like sandpaper, tripping over syllables. He didn’t need to. Just being with her was enough. He sat there, holding her hand. He no longer felt rushed, no longer desired to leave. Joe would end up making that decision for them, anyway. For right now, he just enjoyed the sensation of her fingers laced through his, the heady fragrance of her perfume, the easy, comfortable silence that hung between them.

He looked up, at the infinite black canvas of the sky, at the stars, which shimmered like precious jewels. She had said that maybe our dreams lived up there, among those stars. All we needed to do was believe, and remember.

Michael S. Fedison was born in Rochester, New York, and now lives with his wife, Sarah, and regal cat, Luke, in the green hills of central Vermont. Michael has been writing creatively for as long as he can remember, and has had short fiction published in several literary magazines, including Iconoclast and The Written Word. He works as a full-time technical writer and also is a freelance proofreader and copy editor.

Michael has been a lover of imaginative stories his entire life. He enjoys any story that takes you by the hand, lifts you up, and transports you to another place, a new and creative way of looking at the world around us.

Buy the book at Amazon, Barnes and Noble, Smashwords, or Kobo