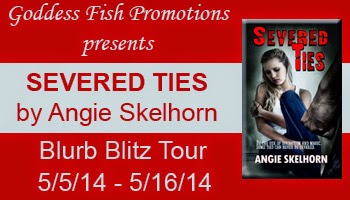 Severed Ties is a story of close friendships, addiction and magic.

Severed Ties - By the use of divination and magic, some ties can never be severed

Consulting tarot, ordinary playing cards, astrology, and spell-casting—Frankie and Sandra set forth to free Candice from the dangerous situation she is in.

Frankie sat on the stoop and looked around. Across the street, a woman only a couple of years older than her had two infants in a playpen and was chain-smoking. An old man, his lined face showing the evidence of his hard life, pushed a shopping cart full of empty beer bottles past her. Kids too young to be on their own played out front, in the streets.

“I’m Calvin. Who are you?” a young man asked, walking past her down the stairs. She gave a quick glance in his direction before turning away.

He had medium brown hair cut close to his scalp, brown puppy-dog eyes, a stocky build, and a sweet smile. The tattoos around his neck, arms, and hands surprised her. She read “love” on one set of his knuckles and “hate” on the other.

“This one I fight with,” the young man explained his hand in a fist. “This one, I love with.”

She smiled at his answer.

“Are you moving in?”

“I’m Frankie. I think so. I’m waiting here for my friend,” she said, pointing to the front door. “She’s inside, making the arrangements.”

“I live here on the second floor. Have now for a couple of years. You’ll like it here. The tenants mind their own business. Well, they mostly keep to themselves. Do you have a job, yet?”

“No, I’m going to start looking tomorrow. I think Sandra wants to spend tonight settling in.”

Calvin lit a cigarette. He blew the smoke out of his nostrils.

“Okay,” she giggled, giving him a quick once over without being obvious. She found him quite interesting. She hoped to know him better. She didn’t know why, but she did.

Calvin disappeared down the street and rounded the corner before Sandra reappeared.


ABOUT THE AUTHOR:  My name is Angie Skelhorn and I live in Canada. My interests include tarot, and other forms of divination, astrology, spirituality, mythology and harness racing. I gear my writing toward Witchcraft and Spiritualism. I've been published in Circle Sanctuary Magazine and online at Witchvox, WitchesandPagans.com and GlobalGoddess.org.