The Overending by Rick Johnson - Review and Giveaway

This post is part of a virtual book tour organized by Goddess Fish Promotions.
Rick will be awarding a $50 Amazon GC to a randomly drawn commenter during the tour.
You can click on the tour banner to see the other stops on the tour.

The Overending is nonstop, fast-paced, mind-bending fantasy. Fantastic and quirky, exhilarating and addicting, this entertaining adventure takes readers on a wild ride that they will never want to end.

Ridiculous, but deadly serious. Hits you hard in the funnies, while turning your mind inside out.

MY Review:
This is the second book in the series about Helga and her friends as they fight against the tyranny that has taken over their land. While it can be read as a standalone, I think I would have enjoyed it more had I read the first book in the series. I'm planning on getting it before reading the NEXT book in the Wood Cow Chronicles.

The book is very character driven-- it was easy for me to forget that they were animals. I was caught up in their struggles and rejoiced in their successes. I definitely want to read the next episode in their adventure.

Seeing that she had won the first round in this contest of wills, Bem leaned back, pulling away from the face-to-face staring match. “To catch Yii Strikers, you’ve got to sleep in the open in their territory. Lie very still and let them slither up across your body. Don’t move, or you’ll spook them—and that’s the end of you. They like the warmth of a body and they especially like the warmest part of your body, the head. Wait long enough, and be still enough, and they will coil up right on your face and go to sleep. This is the most important part. You’ve got to leave your mouth open wide and breath through your mouth. The Yii Striker likes that warm, moist air. The ol’ snake will just curl up around your open mouth and let its head hang down right into your mouth. You wait until you’re sure as sure can be that the snake’s asleep, and then you slam your jaws shut on the snake’s head. He can’t bite you. You just let him flail his body around until he wears himself out, then you take a knife and cut the body away from the head. Then, you can spit out the head. And that’s how you capture a Yii Striker.” 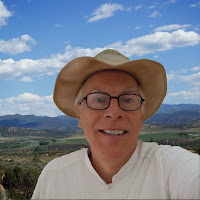 I am a native of the Great Plains, having grown up on a farm in the Platte River Valley of western Nebraska. I love the wild beauty of the Plains and nearby Rocky Mountains--the too hot, too cold, too empty, too full of life extremes. Typically, the awesomely diverse and the awesomely stark are much the same, even as they are different. Although I have lived in Michigan, North Carolina, and British Columbia, the western plains, mountains, and desert are in my heart.

As my day job, for over thirty years I have been a faculty member and administrator in higher education. Teaching broadly in the liberal arts, including creative writing, in addition to my novels, my professional publications include educational materials, poems, and 28 stories for young readers. I am a member of SCBWI.

As an author, I'm drawn to eccentric, unexpected characters: those who surprise because they hear a distant galaxy, see a different music, create their own fragrance rather than get hooked on a soundtrack; the child who has her own ideas about how the emperor is dressed; the lunatics and rebels who tell stories on the boundaries. I tell unusual stories that take readers to worlds they never imagined—definitely a whole new ride.