The Secret Diary of Sarah Chamberlain by Sarah Norkus - Review 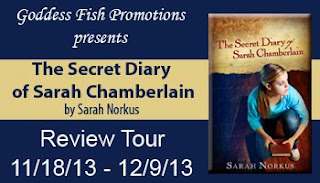 This review is posted as part of a virtual book tour organized by Goddess Fish Promotions. Sarah will award a $20 Amazon GC to one randomly drawn commenter during the tour. Click on the tour banner to see the other stops on the tour.

Fifteen year-old Emily Grace (Em) discovers a secret hiding place under a wooden plank in the attic of an old house in Petersburg owned by the Ladies Benevolent Society. It conceals a 150 year old diary belonging to Sarah Chamberlain, the previous owner of the house. Turning to the last entry, Em’s interest is piqued by the mention of the missing confederate gold and a murder mystery. She slips the diary into the pocket of her capris.

A week later, Em finishes the diary. Emotions well up inside her as she rereads the last page. The diary holds no clues to the location of the gold. But it is clear that Sarah believes that her husband, Robert, was murdered by the guards in charge of the Union prison where he was being held. Tears slide down Em’s cheeks as she thinks about the senseless murder of the man Sarah loved. She slips the diary back in her pocket planning to return it to the attic while helping her mother clean the old house in Petersburg.

While scrubbing black scuffmarks off the kitchen floor in the Petersburg house, Em has an emotional meltdown. She shouts her list of grievances, including Robert’s murder, before God. Em ends her tirade by saying that since God has done nothing to help her or Sarah she doesn’t believe he really exists. Almost immediately, she is overcome with vertigo and passes out.

Slowly regaining consciousness, Em looks around in confusion. The kitchen has been replaced by a nineteenth century parlor.

I found the story behind the Secret Diary of Sarah Chamberlain quite intriguing - I really like the development of the characters and how I can identify a trait within myself with one of theirs. I enjoyed how Em dealt with everyday life, and how she eventually bonds strongly with her mom. Being shown one world, then another when Em was whipped back into the Civil war was wonderful. I liked reading, then seeing the people come to life. I also like the positive impact that Em has on Sarah's life, completely changing the plot in the diary.

I did have a hard time keeping up with the pace. It was a little fast for my liking, with no time to register what happens before moving on to the next idea. However, it does keep the pages turning. I did enjoy the ideas behind the plot, and how nicely everything fit together in the story.

My favorite parts were the love that the characters had for each other, how one would sacrifice everything for another's well being. It was sweet, and it was caring.

Please continue to write excellent stories for those who like time travel, history, young adult, and love.

Em struggled her way back to consciousness. Moving her cheek on the floor, she puzzled at the sensation. Linoleum was supposed to be smooth and hard, not soft. She slowly opened her eyes and blinked at a table leg about a half an inch from her nose. Wiggling on her belly away from the table leg, Em placed her hands flat and prepared to push herself up. Her eyes widened. Her hands were on either side of a large, red rose embroidered into a rug. She jerked in shock, banging her head on the bottom of a wooden table.

“Ouch,” Em said, rubbing the top of her head.

After scooting backward so she wouldn’t hit her head again, Em sat up and looked around the room. Gone were the sink and the shiny, new chrome faucets. Gone, too, were the refrigerator and stove. In fact, the whole kitchen had disappeared, along with the worn linoleum. “That’s no great loss; in fact, that’s the best part of this crazy dream I’m having,” Em thought.

Em’s brows knitted together. She must be dreaming, although she couldn’t remember ever having the sensation of touch in a dream. Her fingers rubbed across the pile of the rug.

On the ledge over the fireplace, which was no longer bricked in, sat a clock. It ticked rhythmically and showed the time to be ten o’clock. To the right of the fireplace was a beautiful needlepoint chair. Two dark wood chairs faced each other, their cushions upholstered in a floral pattern. One rested to the left of the fireplace, the other was next to the doorway. Each chair had a walnut wooden table next to it, with an oil lamp on each. Against the far wall was a settee, the cushion a slightly worn dusty rose. The walls were painted a moss green. The heavy drapes on the windows next to the fireplace matched the settee. Chills ran down Em’s spine. It all looked so real.

Turning around to look behind her, Em saw the antique writing table that had been sent out to be restored. A small dark wooden chair perched between the drawers. Trembling, Em pushed herself up off the floor on shaky legs. She tentatively touched the smooth surface of the writing table.

But instead of her mother, the biggest black man she had ever seen filled the doorway. He wore a stained and faded white shirt and calf-length brown work pants. His feet were bare and covered in dirt. His short cropped hair looked like a gray Brillo pad. He held a long-handled, curved knife. Em took a step backward, lost her balance, and fell, hitting her head on the mantle of the fireplace. Pain exploded in her head. She crumpled to the floor.

Sarah tells readers that writing is in her blood, literally. Her father was a writer and editor of the horse racing magazine, The Horseman and Fair World. And her cousin, Stephen Ambrose, wrote many historic military books, including Band of Brothers, which became a miniseries on HBO.

Getting a late start, Sarah didn’t pen her first book until she was forty-eight. “I was too busy globe-trotting with my army husband and raising two daughters.” But she is quickly making up for lost time with five manuscripts completed and three published books in the last eight years: the creative non-fiction, The Eleventh Summer, a general fiction, Until The Wind Changes, and a Christian historical fantasy, The Secret Diary Of Sarah Chamberlain. “I tend to be all over the map genre-wise, writing whatever sparks my imagination.”

Sarah is a member of the American Christian Fiction Writers, the National Society Daughters of American Revolution, Toastmasters International and the American Red Cross. She grew up in Lexington, KY, but now resides in Colonial Heights, VA with her retired military officer husband, Michael.