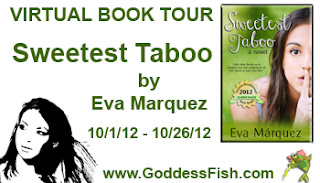 Welcome to Eva Marquez on her virtual tour with Goddess Fish Promotions for her controversial YA, "Sweetest Taboo".  Eva is giving away a kindle to one lucky commenter, so chat with her today and then follow her tour here for more chances to win.

As we’ve all experienced through our interaction with media outlets (be it FB, Twitter, CNN online, or plain old fashioned television), student/teacher romances seem to get center stage when a story gets out. Who can forget the LeTourneau/Fualaau story (adult female teacher impregnated by her 6th grade student, and then married him nearly a decade later after she was released from prison for her offence) or the recent Hooker/Powers story (adult male teacher left his wife and children to move in with recently graduated female student)? These cases hit the news and they hit big. The fascination lies in the forbidden nature of the romance, as well as the age difference and perceived maturity levels of the two individuals involved. There’s also the societal stigma associated with abuse of power (i.e. who can forget the Clinton/Lewinski ordeal!). These relationships are fascinating because they are considered taboo in our society, and because there is an element of adult abusing power. The issue does not appear to be one of ‘lack of love’ between the individuals in the relationship, but concerns about manipulation, unequal power-balance, and perhaps even coercion.

Sweetest Taboo was conceived by my own fascination and interest in these news-gripping stories. I was also intrigued by the news of one of one of my former high school teachers being convicted of [sexual] misconduct with a minor (from what I understand he was in his early 40’s and she was 15). This particular event was pivotal in inspiring me to write Sweetest Taboo, as I wondered about how these relationships originate and how they flourish under the radar. In Sweetest Taboo, I got to unravel a clandestine relationship, one exciting page at a time.

Although I did not intend for Sweetest Taboo to part of a series or saga, several readers (and now fans!) have provided critical feedback that has made me think twice about the nature of my debut novel. Without spoiling any plots, I can safely say that readers want to know what happens next. Sweetest Taboo does not end the way readers expect, and there is a natural, so now what? element to the novel. My readers have inspired me to work on a sequel, Tainted Love, which I have been writing diligently over the past several months. Readers can expect complex and somewhat disturbing revelations, some disappointments, and definitely some tears. The stories I weave always include trials and tribulations, but they will also include redemption and hope.

Isabel Cruz was fifteen years old when she met Tom Stevens. She was 15 when they started dating, and 16 when she lost her virginity to him. By the time she turned 18 and went to college, everything had fallen apart. This hadn’t been an ordinary love, though. Not a love between two dear friends, or even high school sweethearts. This had been the most taboo sort of love there was: a relationship between a student and her teacher. Isabel started her high school career as a normal student, but set her sights on Tom Stevens as soon as she met him, and pursued him with an intense – and sometimes reckless – fascination. When he finally approached her after swim practice and told her that he shared her feelings, it was the start of a forbidden and dangerous relationship. 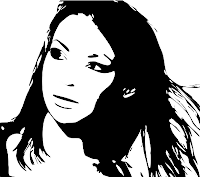 Born in Buenos Aires, Argentina, daughter of European immigrants, Eva Márquez has spent most of her life outside of her home country. At the age of five, Eva accompanied her parents to the United States, where the family settled permanently. After graduating from university, she went on to complete graduate studies in International Relations in Spain. Eva received her Master of International Studies degree from the University of Sydney and went on to work in the global health field in Sub Saharan Africa and South East Asia. Eva currently resides in Southern Africa.