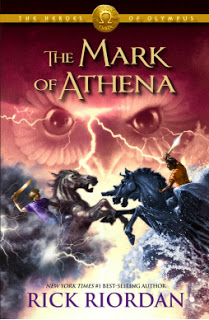 Annabeth is terrified. Just when she’s about to be reunited with Percy—after six months of being apart, thanks to Hera—it looks like Camp Jupiter is preparing for war. As Annabeth and her friends Jason, Piper, and Leo fly in on the Argo II, she can’t blame the Roman demigods for thinking the ship is a Greek weapon. With its steaming bronze dragon masthead, Leo’s fantastical creation doesn’t appear friendly. Annabeth hopes that the sight of their praetor Jason on deck will reassure the Romans that the visitors from Camp Half-Blood are coming in peace.

And that’s only one of her worries. In her pocket Annabeth carries a gift from her mother that came with an unnerving demand: Follow the Mark of Athena. Avenge me. Annabeth already feels weighed down by the prophecy that will send seven demigods on a quest to find—and close— the Doors of Death. What more does Athena want from her?

Annabeth’s biggest fear, though, is that Percy might have changed. What if he’s now attached to Roman ways? Does he still need his old friends? As the daughter of the goddess of war and wisdom, Annabeth knows she was born to be a leader, but never again does she want to be without Seaweed Brain by her side.

Narrated by four different demigods, The Mark of Athena is an unforgettable journey across land and sea to Rome, where important discoveries, surprising sacrifices, and unspeakable horrors await. Climb aboard the Argo II, if you dare. . . .


My review: Annabeth is always the leader of the quests. Fearless, strong, unnerved, and always ready for battle. But when her mother, Athena, appears to her on a bus with a demand, she feels like her world and her sanity is collapsing around her. Her mother gives her a small coin and a prophecy known to kill: “Follow the Mark of Athena. Avenge me.”

Annabeth is terrified and scared for Percy. All she wants is to have her life come back to normal. Well, as normal as a demigod’s life can be…but she is nervous that Percy might have changed. What if he has changed to the Roman ways? Does he want to come back to Camp Half-blood? Does he even care? Her life is difficult enough, but to be rejected by Seaweed Brain would be the worst..

Frank and Hazel, the two newest demigods in the series, are hauled aboard the Argo II after a terrible mishap, and set off with the five Greeks in a hazardous journey across the seas to Rome where Annabeth must face every child of Athena’s worst fear…along the way the meet new gods and creatures and of course, fighting Gaea every step of the way.

Riorden has done an amazing job again. I had been waiting for the moment for the Romans to meet the Greeks. That was definitely my favorite part. His talents in writing made the book come alive, and it’s almost as if I am in this alternative reality with the demigods. I love his sense of humor and knowledge of Greek myths. And, like the books before it, this one ends in a literal cliffhanger…

I can't recommend this book and the series enough.