Please welcome author Margaret Fieland on her tour with Bewitching Book Tours today. We're featuring information about her book, "Relocated" and she's shared a diary entry from the protagonist from her book. 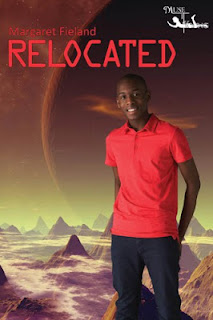 When fourteen-year-old Keth's dad is transferred to planet Aleyne, he doesn't know what to expect. Certainly not to discover Dad grew up here, and studied with Ardaval, a noted Aleyni scholar. On Aleyne, Keth’s psi ability develops. However, psi is illegal in the Terran Federation. After a dangerous encounter with two Terran teenagers conflict erupts between Keth and his father. Keth seeks sanctuary with Ardaval. Studying with the Aleyne scholar Keth learns the truth about his own heritage. After Keth's friend's father, Mazos, is kidnapped, Keth ignores the risks and attempts to free him. Little does he realize who will pay the cost as he becomes involved with terrorists.

Today was my first day at the school on the base, and I wish I were back with Ardaval and the Aleyni kids. Shaffa is nice, and even Darus is up-front about disliking Terrans. The kids on the base, all except maybe one, pretend to b friendly but secretly would happy to see me wander off and die. Okay, maybe not quite that bad, but they're not nice. Dad won't give in, though. He wants me to go to school with Terrans.

We had an Aleyni language lesson. I'm the only one who speaks Aleyni, except maybe the teacher, John. Practically none of the Terrans here speaks the language. I swear that John, the teacher, only knows enough to stay ahead of the class lessons.

Why did Dad make me learn to speak Aleyni? I haven't bothered to ask him. He'd just put me off with some blather about how it's good to learn other languages, or how it made the exchange students who hung out at our apartment back home more comfortable when they could speak their own language with us. He's keeping secrets, but I don't know how to pry them out of him. It makes me feel like he's some stranger I barely know, and that I barely know myself, too.

“What do you mean I must undergo a psi exam? The Terran Federation legislates against any use of psi." The speaker, a human woman with wild gray hair, glared at the immigration official.

I gazed at the official. Like most Aleyni, he stood over six feet, slender, with extra wide hands, and thumbs able to bend all the way back. His head appeared more oval than humans, too, and he showed almost no external ears. His skin appeared almost black, like Dad’s and mine, and hers appeared pale. His dark skin provided a welcome spot of color against the general gray of the space port interior. The temperature felt pleasant enough, though; nicely warm instead of the chill of the Terran Federation space station circling above Aleyne.

He could have been reading a laundry list. “Madam, Aleyne is a sovereign planet, not part of the Terran Federation, and if you want to clear immigration you must undergo a psi exam.” He pushed a data cube toward her. “Either sign the consent form and undergo the exam, or go back up to the space station.” He added, “Take it or leave it,” in Aleyni. No one else noticed.

She threw the data cube on the floor, stomped, and it shattered into fragments. “I won’t do it. I don’t want any aliens screwing around in my head.”

The official stared at her for a moment. “It’s against our ethics to screw around.”

The woman crossed her arms. “I don’t believe you.”

“You can return to the space station and take the next ship out.” The official’s face revealed nothing, and his gray eyes stared straight at her. His hands hung loose at his side. I considered him a model of polite behavior, considering. I would have punched her.

The woman stared at him. Her head tilted up, because she barely made five feet. Her face, which wore a ferocious frown, turned bright red. Maybe she disliked dark skin, or maybe she simply hated Aleynis.

“I’m going.” She spat the words, turned, glared at us, and marched down the corridor. I glanced back and noticed her arguing with a Space Force officer. The expression on his face would have curdled milk.

Dad prodded me. “Keth, come on.” He grabbed two data cubes, scanned them, and signed both. The official passed both of them through his reader and put one through a slot. “How old is the boy?”

“I’m fourteen Terran standard years. That makes me sixteen in Aleyni years. The Aleyni year is shorter than ours.”

“You need to consent for yourself.” He passed me a new cube and I signed.

The official threw it away and handed me another. “Read first and then sign.” I sighed loudly and read the whole thing, both the top half, in Aleyni, and the bottom, in English Common Speech. I started to compare the two, noticing how much clearer informed consent appeared in the Aleyni version, when Dad prodded me. I signed the form and returned the cube to the official. “Okay, I read it.”

The official smiled and pushed it through the slot after Dad’s.

I wasn’t scared, since Dad told me about the need to take a psi exam. The Aleyni checked for any kind of plant or animal, or whether we planned a terrorist attack. Dad said Federation anti-psi fanatics attacked a couple of times recently, so I understood why they checked carefully.

The examiner set me in a chair. He asked me again if I consented to the exam. When I said yes, the examiner put his hands on the sides of my face, looking into my eyes. His hands burned hot against my skin. A thousand ants chewed through my brain and a voice whispered questions I couldn’t quite make out. I tried to take a breath, but my throat tightened, and I gasped aloud. I squeezed my eyes shut and tried to stop shaking. I shook my head, trying to make the voices go away, and the examiner removed his hands and stared into my eyes for a moment. The buzzing voices stopped, leaving my head feeling as though it would burst open. The examiner smiled at me and passed me through the checkpoint. A couple of minutes went by before my stomach stopped heaving, but hammers still pounded inside my head.

Born and raised in New York City, Margaret Fieland has been around art and music all her life. Daughter of a painter, she is the mother of three grown sons and an accomplished flute and piccolo player. She is an avid science fiction fan, and selected Robert A. Heinlein's “Farmer in the Sky” for her tenth birthday, now long past. She lives in the suburbs west of Boston, MA with her partner and a large number of dogs. Her poems, articles and stories have appeared in journals and anthologies such as Melusine, Front Range Review, Umbrella Journal and All Rights Reserved. In spite of making her living as a computer software engineer, she turned to one of her sons to format the initial version of her website, a clear illustration of the computer generation gap. Her book, "Relocated," was released by MuseItUp Publishing in July, 2012. The Angry Little Boy," will be published by 4RV publishing in early 2013.

http://www.goodreads.com/author/show/4417476.Margaret_Fieland
Posted by Books in the Hall at 6:01 AM