The 13th Descent by Ky Lehman - Spotlight and Giveaway

This post is part of a virtual book tour organized by Goddess Fish Promotions. Ky will be awarding a $15 Amazon or B/N GC to a randomly drawn winner via rafflecopter during the tour. Click on the tour banner to see the other stops on the tour.

ONE CHOICE CAN MAKE AN IMMORTAL HUMAN.

BUT WHAT CHOICES NEED TO BE MADE TO GO BACK AGAIN?

After her mother and her grandmother were killed in a car bomb explosion at the heart of their sleepy hillside town where nothing extraordinary usually happens, she discovers that her mother is actually alive and in hiding, her long lost father is a Father, and her best friend, who turns out was once an Archangel, has taken a gargantuan step back in his evolution to live on Earth with her for the past thirteen lifetimes. And besides being the only one in her immediate circle with a serious case of past life dementia, she learns that during her first lifetime, she was married to one of the greatest teachers history has ever known who is now the gorgeous lead singer of a hot new rock band taking the world by storm, and who is keen to meet up with her again in the twenty first century.

As Ren realizes that the powerful family name she bears also brings with it the promise of an unnatural death, she is reminded that it has always brought hope to people on both sides of the veil, human and Tor. As the world draws closer to being completely shrouded by the dark cloaks of her age-old enemies, the Bloodstones, she now, more than ever before, has to draw strength from her origins to protect her family and their ancient truth from this global force responsible for torturing and killing centuries of her ancestors.

As she struggles to unearth who she was, who she is, and who she chooses to be, as well as the expectations of her first mortal love and the heavenly love she has always guiltily denied, she has until midnight on the Solstice find a way to bring light to a compromised heart and to a world on the brink of perpetual darkness.

This first book in The Rosefire Trilogy by debut YA author, Ky Lehman, is a reminder of how the choices we make in the throes of love, loss, hope, and adversity are what makes the divine human, and the human divine.

“Right behind you,” I grumble, trying to coax my jelly legs to step out of the car.

She bustles us inside and disarms her house alarm. She grabs my hand, leads me straight to the navy blue comfy couch and gestures for me to sit. “Drink?” she asks.

She goes to the kitchen and gets me a tall glass of water anyway.

Then everything goes from strange to downright bizarre when she sits down, squishes in next to me, puts her arm around my shoulders and rests her cheek on my hair. I am wedged in-between her and the armrest: I couldn’t move if I tried, and I honestly don’t want to. Hugs from my one and only aunt are like sunny days in the winter. They are rare. They are warm. They smell of cream and cinnamon. They go by too quickly. And you know you’ll have to wait a while for the next one.

“Look at me, Renay,” she gently commands. Bleary eyed, she carefully scans my face and sighs.

It seems she is already regretting what she is yet to say. A chill of forewarning forces a shiver: it sets my heart pounding and my legs that have finally regained feeling start to twitch and shake, preparing to run. She senses my panic and holds me tighter, and starts to softly hum a familiar tune that Nanna must have used to calm her down too. Slowly, the dread resides and the warmth returns. My stiff posture thaws allowing me to slump into her side. Realising she has been given the green light, she takes a deep breath and starts talking.

Aunt Romey has never been one to beat around the bush. Simple English. No fluff. The bare facts followed by her opinion of them. But this time, the candour I usually appreciate brings with it a realisation that hits me so hard, that, for the first time since the bomb went off, I am relieved the undercooked takeout chicken kept me home that night.

Bedtime stories that once lulled me into sweet dreams now leave me feeling cold, heavy and sick.

Horrifying truth gives a voice to the intoxicated mutterings of a grieving husband and father.

All of the frayed strands and loose ends I’ve obliviously left hanging tangle and weave into the blood stained tapestry that is Aunt Romey’s history lesson.

Three versions of the same unfathomable story, each with its own conclusion. The fairy tale ends in hope.

The drunken rant ends in fear.

And the history lesson will only end with the death of the Three Roses, who my newfound enemies believe are Nanna, Mum and me.

Surrounded by the ghosts of our ancestors and their vindicating screams, I cling to the only olive branch within reach.

Mum may be on the run, but she is alive and well.

But the sinewy little branch is not strong enough to bear the weight of centuries of lost life. It snaps, and I limply fall into large, familiar, bloodstained hands that carry me off into the black quiet. 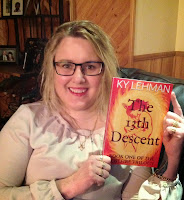 KY LEHMAN is a novelist, a children's author, a teacher of swimming and water safety, wife to her high school sweetheart and the proud mother of their three very tall sons. She lives in the Yarra Ranges, Victoria, Australia, with her husband and their children where she is currently writing the second book in The Rosefire Trilogy, The 13th Rising.

a Rafflecopter giveaway
Posted by Books in the Hall at 4:41 AM