By Starlight by Nancy Lindley-Gauthier -- Virtual Tour and Giveaway

This post is part of a virtual book tour organized by Goddess Fish Promotions. Nancy will be awarding a $10 Amazon or B/N GC to a randomly drawn winner via rafflecopter during the tour. Click on the tour banner to see the other stops on the tour.

The night my best friend Gracie disappeared, I had a nightmare.

A monster loomed from the shadows around the campfire. I ran. The thing stretched after me…

I woke gasping, afraid it might somehow be true. Gracie could always make me feel better – but she didn’t respond to my email. Not that night; not ever.

That's what lead to my summer camp counselor job here near Gracie’s home. Hiking and canoeing fill every moment but I don't forget why I'm here. I’m going to find Gracie.

There's the local ranger and my campers, but will they believe me? I’m alone with this. Somehow, I will find her...

"Shhhh." Frankie, riding point, set her paddle in front of her. She deftly removed her camera from its bag. I followed her gaze, past the high yellow-tipped grasses in a pocket of boggy greenery. Dark, vine-covered stumps jutted from the black surface of the water. Long branches of goldenrod lay flattened, at the foot of narrow, dark limbs. No, not tree limbs, those were legs!

Frankie hastily snapped a photograph of the moose. The animal’s face was half-submerged, but as we glided by, it slowly raised its head and stared at us.

Immense, it stood with long green growth hanging out of its mouth and trailing back into the water. Everyone saw it now. Quiet fell over the lot of us. Frankie leaned this way and that, trying, I guess, to get an exceptional shot.

Slowly, the moose dropped its head back to its soggy grazing.

Chelsea let out a long, drawn out "Coooooool."

I wondered if the kayakers had belted by without even noticing the massive animal by the riverside.

The quiet creek allowed us to glide with paddles barely touching the water. I think after spotting the moose we were all of the same mind.

All we needed now was to see a bear. I stared hopefully into the thick woods on our other side, thinking they might prefer the shade of the evergreens. The girls had to be thinking the same thing, because quiet hung over us; a quiet full of expectations.

Nice that the kayakers had shot ahead. They were always chattering and would have ruined the chance for us to see wildlife.

A splash alerted me again to the swampier side. It held more promise for a bear. Tempting, large dandelions grew right down to the water's edge, and beyond that, stalks of what might be wild rhubarb. Nearer, maple saplings bowed over the river, trailing their leaves and making little circular ripples.

Dragonflies hovered in formation in the shadow of the little maples. They darted up and sideways, always keeping a strange, arrow-shaped formation, as we drew abreast.

A stick twirled slowly in the gentle current, caught in a scrawny maple branch. The yellowy stick had a strangely curved arch as if, somehow, man-made. The dragonflies shot upward as I reached it. I stretched very carefully to grab it. The strange stick snapped closed over my hand… 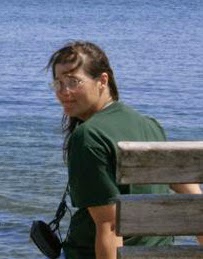 A New Englander throughout her life, Nancy Lindley-Gauthier currently resides in New Hampshire. Her chief interest is her horses (she both rides and drives them) and she especially loves trail riding. Occasionally, she is dragged away from the equines to serve as pillion rider on husband Kent's motorcycle.

Also among her favorite activities is whale-watching… and she’s pleased to record sightings of Minke and Greys off the East Coast and Humpbacks along the Inside Passage on the West.