Review Tour and Giveaway - Seams in Reality by Alex Siegel

This post is part of a virtual book tour organized by Goddess Fish Promotions. The author will be awarding a $25 Amazon gift card to a randomly drawn winner via Rafflecopter during the tour.Click on the tour banner to see the other stops on the tour.

SEAMS IN REALITY is the first book in the Seams in Reality Series.

My goodness, what a great new series!  I picked this book up and did not put it down until I was finished... yes, it was THAT good.

The characters are easy to relate to.  The two main characters, Andrew and Charley are college students and discover they have more in common than a love for theater. They both have a special talent--Andrew didn't know about his though until something odd happens during a performance.

Charley has already been working with Tonya as an apprentice and introduces Andrew to her.  Slowly it's revealed that Andrew has been in their sights for a long time and there's a whole family history he never knew about.

The book is well-paced with some great lines--I love Tonya and her dry humor.  There was one line she had that literally made me LOL.  There are adventures, a touch of mystery, and even a touch of romance growing between Andrew and Charley.

Beware that the book DOES end on a bit of a cliffhanger--- it is the first book of the series after all.  Good news is... Amazon has the second book ready for you!    I give this book a rating of 4 and look forward to the rest of the series.

As a freshman in a suburban college near Chicago, Andrew leads an ordinary life until he meets Tonya, a strange woman with an even stranger secret. She is a master sorcerer, and he becomes one of her apprentices. Tonya's other apprentice is a resourceful young woman named Charley, and they aren't the only sorcerers in the world. The United States government has an entire bureau responsible for controlling them and the special seams which enable magic. Andrew's new life takes a dangerous turn when he meets Blake, a sorcerer who knew his grandfather. Blake's thirst for power leaves a trail of casualties, and in the end, only Andrew can stop him.

"No, you finish first," Andrew said in a loud, clear voice. "Never leave a job 'til you're finished— remember that. Biff, up in Albany I saw a beautiful hammock. I think I'll buy it next trip, and we'll hang it right between those two elms. Wouldn't that be something? Just swingin' there under those branches. Boy, that would be..."

His amplified words boomed through the auditorium. Every seat was filled, and he was the reason, although he never bragged about it. Critics had lauded his acting skills in the strongest possible terms. Andrew remembered one article that had said, "Andrew Kenworthy has the imagination and command of a professional actor twice his age. He would be at home on a Broadway stage." He tried not to let the praise go to his head.

He had no idea where that talent had come from. Neither of his parents were actors or had expressed any interest in the subject. Death of a Salesman was Andrew's first serious production. Something about this particular stage had inspired him to stretch himself in ways he had never attempted before.

He was facing the fake trees on the set. They were just wooden cutouts painted green and brown, and close up, they looked cheap, but the audience didn't care. He was pretending there was a hammock hanging between the trees.

An unexpected movement caught Andrew's attention. Somebody was hiding in the shadows behind the trees, but the play didn't call for an actor to be back there now.

Andrew glanced towards the right wing. Some actors were waiting just offstage, ready to come in on cue. Stagehands in black clothes stood further back with varying levels of interest. Charley had a clipboard in her hand, and she stared at Andrew with a curious expression.

Another movement drew his attention back to the trees. A man in a rumpled gray business suit was standing just out of the light. He was carrying a battered old suitcase in each hand.

Exhaustion made his face sag, and Andrew guessed the man was in his forties. Andrew had never seen him before, but he still recognized him.

He completely forgot an audience was watching. He wandered over and stared at the apparition. Willy just stood there with his sagging shoulders and bent back. He had a blank, mindless expression.

Andrew glanced at Charley, and her eyes were wide with alarm.

"What are you doing?" she whispered. "Say your line!"

Andrew turned back, but Willy had silently vanished. There was nothing behind the fake trees.

What the hell is going on? Andrew thought.

He remembered the play. He turned to the audience, and even though the auditorium was dark, he could see over a thousand faces. They were watching him expectantly.

He realized he had forgotten his next line.

The actor playing Biff said, "Pop, I just washed the car. Do you see? How's that, Pop? Professional?"

The performance continued, but Andrew would be the first to admit it was the worst of his short career. He kept glancing behind the trees and blowing his lines. Normally, he had the focus of a laser beam, but not tonight.

Finally, the show ended, and he didn't get his usual standing ovation. When the curtain dropped, the audience was still in their seats. 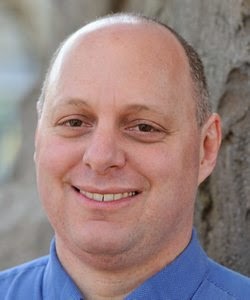 Alex Siegel grew up a math and computer geek. At the age of twenty-five, he received a Ph.D. in Computer Science from Cornell. He continues to make a good living as a software developer in Chicago. In his late twenties, he took up creative writing as a serious pastime with the intention of eventually making it his career. This goal has been elusive, but failure is not an option. In 2001, his wife gave birth to triplet boys. People often ask him how he still finds time to write. In 2009, he began the Gray Spear Society series, and he hopes it will be his key to literary fame.