Max Blizzard and the Gem of Camelot by Patrick Hatt

This post is part of a virtual book tour organized by Goddess Fish Promotions. Patrick will be awarding a $25 Amazon.com gift card or $25 Paypal cash, winner's choice to a randomly drawn winner via rafflecopter during the tour. Click on the tour banner to see the other stops on the tour.

Max Blizzard was like any other drone living in Earth's realm until the arrival of his eighth birthday. On that day his imagination awoke and Max started thinking for himself. He was an outcast the moment he let people know about his imagination. That moment also unknowingly set forth a chain of events years in the making. By having imagination, Max had given Sir Dreadvent exactly what he wanted, a way into Camelot's realm.

Now Max and his friends, Trudesile and Lester, must complete the quest that Max's father, Merlin, set out for him years ago. They must find the Gem of Camelot to defend the realm from Sir Dreadvent's and his sevesties. Their perilous journey will take them from the shores of Merlinia and the ship of Davy Jones to the fields of Avalon, in the hope that they can save Camelot, save Earth and save all the lost realms that have been consumed by Sir Dreadvent and his sevesties on their quest to remake the universe.

A tale about where your imagination can lead if you choose to follow it, with creatures large and small joining Max Blizzard on his journey. King Arthur, Oberon, Hercules, Apollo and other heroes of imagination believed to be myth will become truth as Max and his friends face the trials ahead. Let your imagination lead the way to Max Blizzard and The Gem of Camelot.

"The name is Davy Jones and I've been the keeper of Merlinia and the entrance to Davy Jones’s Locker for many years at Merlin's request." Davy Jones bowed, hoping he would get some recognition from his name.

"Davy Jones? Wasn't he a pirate who stole everything he could get his hands on? At least that is what the stories tell," Bandaid questioned, looking to Arthur for verification.

"I see my name precedes me."

"Lempilightess! Pemestra! Take him!" King Arthur ordered, having heard the stories of Davy Jones and not trusting him whatsoever.

Lempilightess and Pemestra readied their Camelot Candles as Dregg stood between them and Davy Jones.

"Dregg not let you take little blob man." Dregg clenched his huge fist and readied for a fight.

"Now now. There is no need for a fight. What is it with everyone not wanting to trust me? First those three kids and now you. All I did was what Merlin told me to do."

"Yeah, I've seen the supposed high and mighty trio. I wasn't sure they were any better than the heroes I locked up. But when they stopped Titania, I became a believer."

"So the dearies are okay?"

"I let them in Davy Jones’s Locker, so they could…" Davy Jones took a few steps closer to Bandaid and King Arthur and lowered his voice to a whisper, "Go after the Gem of Camelot." 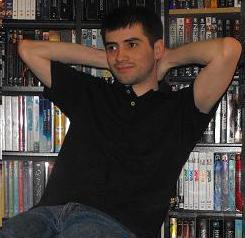 About the Author: Patrick Hatt can be found in the East Coast of Canada. He hates writing these things but doesn't mind talking in the third person. He dabbles in a little of this and a little of that, not afraid to attempt something new

He is owned by two cats, one of whom has his own blog, It's Rhyme Time. Yeah a rhyming cat, who knew? He would be considered a both person when it comes to cats and dogs.

He is also quite the movie and TV buff. As you can probably tell does not take himself seriously and has more stuff in his head than is needed. Thus the novels as just one more form of release. Thanks for the visit and enjoy!