Ocean of Dust by Graeme Ing - Blurb Blitz and Giveaway

Fourteen-year old Lissa is snatched from her home and finds herself a slave on a trading ship traveling on a waterless ocean of nothing but gray dust. A feisty, curious and intelligent girl, her desire to explore the ship earns her the hatred of the cruel first officer, Farq.

Fascinated by the ocean of dust, Lissa becomes embroiled in its mysteries, sensing things that the crew cannot, while cryptic whispers in her head are leading her toward a destiny linked to the dust itself. Only one man aboard can help her make sense of her new talent, but can she trust him? All is not as it seems, and she must unravel the clues before it’s too late.

When a sinister plot casts her adrift on the barren ocean, her best friend is left in the hands of the treacherous crew. Everything hinges upon her courage, quick wits, and her ability to master her new talent.

... she spotted a brown conical shape lodged on a fallen stump between a pair of trees. Dozens of bugs with red striped abdomens swarmed above it - War-blits. She couldn’t keep up the pace for much longer, and her lungs felt ready to burst. Her hastily formed plan might be her only chance to escape the feline snapping at her heels. She sucked in air and urged her aching body forward. Up close, the bugs were as large as her thumb, with wicked, black stingers on their rear-ends.

Now she was caught between a swarm of spiteful bugs and an animal about to bite her in half. It was now or never. Screaming for courage, she launched herself at the War-blit mound, praying her timing was right. She clenched every muscle, waiting for the stings to stab all over her body. The furious buzzing engulfed her as she flew through the air and over the mound.

Her shoulders hit the ground on the other side, and she tumbled over and over, smashing into a tree. Something stabbed her leg. Agony ripped through her body. Then a sharp pain on her right arm. She flailed her limbs in all directions trying to keep the bugs from her face.

The feline had landed atop the stump and crushed the mound. The air turned black as a cloud of War-blits sprayed from a hole in the stump, buzzing angrily and covering the creature like a cloak. 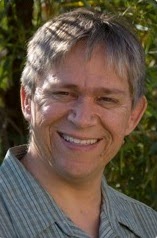 Graeme is a writer of speculative fiction. He probably won't fall into existing pigeonholes, but hang around and you'll get to read tales of fantasy, science-fiction, paranormal, cyberpunk, steampunk and who knows what.

Born in England, Graeme now lives in San Diego, California. His career as a software engineer and development manager spans 30 years, including the development of a dozen computer games for consoles, home computers and online. Graeme is also an avid armchair mountaineer, astronomer, mapmaker, pilot and general geek. He and his wife, Tamara, share their house with six crazy cats.