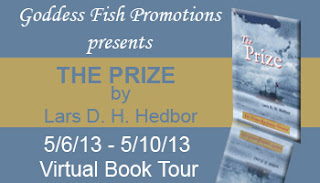 Today we're visiting with author Lars D. H. Hedbor on his tour with Goddess Fish Promotions for the historical YA novel, "The Prize".

Lars will award one $25 Amazon gift card given to one random commenter at the end of the tour, so comment today AND follow his tour! The more you read and comment, the better your odds of winning. The rest of his tour stops are here.

Lars answered many of my prying questions -- thanks!

Growing up during the American Revolution in Vermont, Caleb's actions will shape the direction of his life - and the fate of a nation.

I hoped to enter the space program, but that dream died with the Challenger crew. Growing up with a mother who was a journalist, in a house with more books in it than the school library, I always pretty well knew that I'd be a writer, myself.

Although I loved languages and mathematics, and never got better than middling grades in it, I'd have to say that my chemistry and biology classes were my favorites. Learning how the building blocks of the universe come together to form everything from rocks to grass to human beings, and how marvelous the inner workings of all of these are, gave me a sense of the incredible complexity that is there to find by examining any everyday object in our lives.

I think I'd tell that young man that things are both harder and easier than he expects, and that the road ahead is enriched with countless moments of joy, each worth pausing to cherish and appreciate. More than anything else, I'd advise him to never take for granted the people he loves, for change is constant, and life is short.

Like so many before me and after me, I devoured the classic Hardy Boys mysteries, and when I exhausted those, the Nancy Drew series was a natural supplement. It wasn't too long after that that I discovered H. G. Wells' classic science fiction, and then began reading Robert Heinlein.

I tend to read a number of books simultaneously, so it's a stack of books. At the moment, I'm in the middle of Lost Moon, written by the commander of the Apollo 13 crew, Ghost Stories, by Jim Butcher, which I'm trying to read before my wife gives me too many spoilers, and The Arts & Crafts in New England, 1704-1775, which is an old compilation of newspaper articles concerning artisans of the Colonial period. On my Nook, I'm re-reading Patrick O'Brien's Master and Commander, for the pure joy of reading some of the finest historical fiction ever set to paper.

Wow, tough choice. I think I'd love to spend an evening with Robert Heinlein's recurring character Lazarus Long, a man who has lived for four thousand years, explored the galaxy, and come to know himself better than perhaps anyone else in history.

I'd also really enjoy meeting Patrick O'Brien's famous partnership of Captain Jack Aubrey and Doctor Stephen Maturin, whose exploits during the Napoleonic Wars in the service of the British Navy touched on most of the seagoing events of that era.

Finally, Carl Sagan's character Ellie Arroway, from his novel Contact, whose single-minded devotion to the pursuit of science helped her to discover the lasting value of her own humanity in understanding the makeup of the universe.

Which of your own characters would you most like to meet IRL? Why?

Of all the characters I've written, Captain Mallett in The Prize is the most fascinating to me. I intended that he have no more than a passing mention, but as soon as he made an appearance in the story, this forceful and entertaining personality strode to the center of the stage and insisted on being heard.

His past as a French pirate in the mid-eighteenth century Caribbean is hinted at in the historical record, but his crusty nature and his irreverent approach to life, along with his overwhelming competence at the things he needed to do, all make him tremendously compelling.

I'm travelling, and bringing my kids to see the country - and the world. I could easily spent years driving across this amazing country of ours, and really getting a sense of its unique strengths, as well as its incredible natural beauty and riches.

After that, exploring our roots in Sweden, Germany and England, and seeing some of the great places of the world, and really delving into the history that's shaped our present day would probably help me to exhaust the remainder of this boon. It's a great, fun daydream to consider!

Thank you so much for hosting me in my blog tour - it's been a pleasure answering your questions. I do hope that your visitors will give my novel a read, and let me know what they think of it. I'll also be glad to answer any questions that they may pose in comments here.

Caleb's father is serving with Ethan Allen's Green Mountain Boys as the long-anticipated open war against the British rages up and down the length of Lake Champlain. Between his duties on the family farm and constant worry about his father's safety, the young man's attentions are already fully occupied when a fateful encounter with an unlikely neighbor changes everything. Pulled into new intrigues and new friendships, Caleb finds himself on a path that changes his life - and which will affect the outcome of the whole war.

Mallett did not bother to saddle his horse, but merely put the bit in the stallion's mouth, and pulled himself up on its back. He called out to Caleb, "Here, you ride behind me. Louis is a strong horse, certainly a good deal stronger than his namesake on the throne in Versailles." Both Mallett and the horse snorted, and Mallett added, "The horse is smarter, too."

Caleb smiled and took Mallett's proffered hand to clamber up behind the older man. Scowling now at the still-pealing bell, Mallett growled, "Hold tight, lad, we're going to ride hard." Since he did not want to slide over the horse's rump and find himself suddenly sitting on the road, Caleb heeded Mallett's advice, clamping his hands around the rider's wiry sides.

With a nod, Mallett snapped the reins, and kicked the horse into a smooth, speedy pace over the ground. By the time they pulled up before the blockhouse, where a crowd had gathered, the bell had stopped pealing, but MacGregor stood at the top of the steps, reading loudly from a broadside.

Captain Mallett and Caleb dismounted, and Mallett tied up his horse before they joined the crowd, coming into earshot of the general store proprietor.

"…when a long train of abuses and usurpations, pursuing invariably the same object evinces a design to reduce them under absolute despotism, it is their right, it is their duty, to throw off such government, and to provide new guards for their future security."

As he drew breath, the man beside Caleb whispered excitedly, "'Tis a declaration of independence for the colonies from the Crown, passed by the Congress this week past!" Caleb's eyebrows went up, and even Mallett seemed surprised, pursing his lips thoughtfully and nodding to himself.

Lars D. H. Hedbor is an amateur historian, homebrewer, astronomer, fiddler, linguist and baker. His fascination with the central question of how the populace of the American Colonies made the transition from being subjects of the Crown to being citizens of the Republic drives him to tell the stories of those people. Hedbor resides in the Pacific Northwest with his wife and five daughters, and is hard at work on the next novel in the Tales From a Revolution series.


"Wonderful! Lars Hedbor has magnificently captured the zeitgeist of Colonial Vermont! He seamlessly blends his tale with the events of the American Revolution in the Champlain Valley!" - Daniel O'Neil, Executive Director, Ethan Allen Homestead Museum