Death Lies Between Us by Jody A. Kessler - Review tour and giveaway 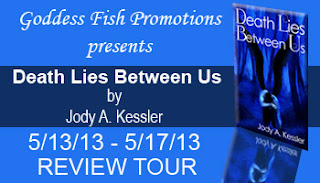 This review is done in conjunction with the author's tour with Goddess Fish Promotions. Jody will be awarding a $30 Amazon GC to one randomly drawn commenter during the tour, so complete the Rafflecopter entry at the end of this post and you're entered! If you want more chances to win, visit the rest of her tour stops here.

Saving the life of someone you love should not be the worst thing you have ever done, unless you are an Angel of Death.

Disgruntled with his position in the afterlife and conflicted by his feelings toward his new client, Nathaniel Evans forgoes the rules and saves nineteen year old Juliana Crowson from being hopelessly stuck in Forge Creek. This alters Juliana’s destiny and she finds herself in a series of near death accidents.

In the mountains of Colorado, Nathaniel comforts Juliana as she struggles to understand her paranormal abilities while coping with her brother’s drug addiction. When an ill-tempered Native American Shaman teaches her the difference between ghosts and place memories, she decides she wants nothing to do with the supernatural world. Too bad she doesn’t know that Nathaniel is part of it.

Will fate bring these two together, or has Nathaniel made the biggest mistake of his afterlife?


My Review:  There was quite a lot going on in the book with the angel of death, ghosts, drug abuse, potential love interests, Native American beliefs, hater girls and more ... it sometimes made it a bit difficult to keep everything straight.  Still, the concept behind this story was so interesting I couldn't help but keep turning pages.

I did like how the author switched between Nathaniel and Jules' POV so we could see what was in both their heads.  I wasn't a fan of her brother, Jared ... I think I was supposed to like and empathize with him more than I did.  Yes, I realize there was a drug problem, but he was just mostly really a character I just didn't enjoy from the moment we meet him.

I wish Lance had been more viable as a potential love interest.  He was definitely interested, but it's clear from the start that Juliana has less than zero reciprocal interest, and that was too bad.  I really dig a good love triangle!

I really enjoyed watching Juliana realize and grow into her "powers" as she stumbled across ghosts and memories.  These scenes in particular were typically well written and fascinating to read (the mother in the store, concerned about her daughter, was gut-wrenching and nearly brought me to tears -- I hope my mom watches over me when she's gone like that).

I loved Nathaniel ... what a great character. I hope we continue to learn more about him as the series continues.  He feels like a character with a lot of interesting backstory... he absolutely has me intrigued.

While I wasn't totally in love with the book (and again, I think it might be because of the sheer volume of information here), I did love the premise and the two main characters (plus Juliana's grandmother is fantastic) enough that I'd check out another book in the series.  It was absolutely worth my time.

“I can help it feel better. Trust me. Just one more second and… there.” I place her foot down on the grass and lean back. “Feel any better?”

She covers her foot and ankle with her hands. “Yes, much. It’s not even cold anymore.”

She looks at me with a clear question on her face. I turn away and watch the water meander downstream. “You should be more careful out here. What if I hadn’t shown up?”

“I could’ve died from hypothermia.”

“You don’t sound disturbed about it,” I point out.

“You did show up though, and I didn’t die.” The next thing she says into her lap, but I hear it clear enough and I am surprised by the words. “It wasn’t totally unexpected.”

“Did you just say you were expecting death?”

“Does that sound crazy? It’s just — I had a feeling something really horrible was going to happen today.”

“Do you get that feeling often?” I ask. Maybe behind those delicate green eyes is someone who is missing a few marbles. I don’t really believe it from the short amount of time I’ve been with her, but it’d make things less complicated right now if she was mental.

“Not often, no. But one time something really bad did happen, so I take it seriously.”

I remembered her black pen scratching, the words “when will it be my time” and her sullen face in her room. Is she psychic or something? She sits still, her eyes focused on her lap. Her fingers are busy shredding blades of grass into miniscule pieces.

“It ended up not being too terrible after all. You came, and now I’m fine.” 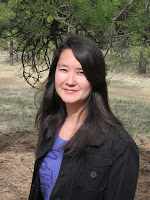 Jody A. Kessler enjoys writing paranormal novels and is a member of Pikes Peak Writers. She is a yoga instructor, Reiki Master, and a graduate from the Colorado Institute of Massage Therapy. When she took an extended leave from her massage practice to stay at home with her newborn she returned to her first true passion —writing. She spends most of her time being a mother, writing, and teaching yoga, but also likes going to concerts, hiking, practicing herbal medicine, and reading anything that catches her interest. Jody lives in the mountains of Colorado with her family.

Or connect with her here:


a Rafflecopter giveaway
Posted by Books in the Hall at 12:01 AM