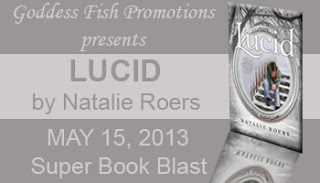 Today we're visiting with author Natalie Roers on her tour with Goddess Fish Promotions for the paranormal YA novel, "Lucid".

Natalie will award one $10 Amazon gift card given to one random commenter at the end of the tour, so comment today AND follow her tour! The more you read and comment, the better your odds of winning. The rest of her tour stops are here.

Being hailed by critics as an intelligent new voice in young adult fiction, Roers' debut novel tells the anything but ordinary, coming of age story of a small town, teen aged, misfit named Travis Hunter.

Disfigured at birth and ostracized at school, Travis dreams of acceptance and secretly yearns for the affection of a beautiful young woman named Corrine. When a mysterious doctor promises to help Travis through something called lucid dreaming, Travis suddenly finds himself ushered into a secret society called "The Lucid", a collection of social outcasts like himself, who have created their own world inside of dreams.

When Travis discovers he is able to bring Corrine into these dreams, he gets more than he ever bargained for and soon finds himself learning the secrets of love and life in a fantastic unconscious world.

An instant classic, Lucid is a timeless story of self-acceptance with a fresh paranormal twist.

Her eyes widened. What I saw in them made me want to drop to my knees. She knew who I was! I could see it. She recognized me! It was real.

“The bird! You made the bird!” I bellowed. “It was yellow and its eyes were made of stone!”

Corrine shook her head back and forth in disbelief. As I staggered toward her, she tripped backwards and fell into the line of coffee pots behind her.

“What the? Grab him!” I heard John yell.

In all the excitement I had forgotten there were other people in the room.

I felt their arms grab me from behind.

Marissa, who had been watching the scene unfold in stunned silence, now ran to Corri to help her to her feet. “Get him outta here!” she yelled.

John and Terry started to pull me back by the shoulders. I swung around and hit Terry square in the face. The smacking sound that my hand made against Terry’s cheek shocked them enough to let me go for a second.

The enormity of what I had just done didn’t register at all.

I rushed forward, completely out of control. But as I got closer to Corri, her image started moving away from me. Terry and John had lifted me clear off the ground. They were carrying me by my arms, backwards, out the front door.

There was no pain as my body slammed against the cold cement outside. Adrenaline was coursing through my veins. The feeling was in every part of my body: every finger, every toe, was alive and on fire.

"Roers' debut novel heralds the arrival of an intelligent, heartfelt voice in the world of young adult fiction. The rich characters, emotional complexity, and confident prose are matched only by the landscape of dreams that Roers sets them against... a landscape brought vividly to life by the author's seemingly boundless imagination. This is a novel that respects its readers as much as its characters, and that's a beautiful rarity."
~ Mike Flanagan, Filmmaker, Absentia and Oculus

"Natalie Roers' debut novel is both riveting and relevant. More than a paranormal/fantasy/thriller, this is a complex tale that cuts to the very of heart of issues facing young adults today. Well sculptured characters and powerful imagery propel Roers' fascinating narrative."
~ Jason Tinney (Award-winning freelance journalist, musician, actor and the author of the story collection Bluebird.)

"Lucid is an interesting story and a fun read."
~ Amy Carol Reeves, author of Ripper and Renegade

"Natalie Roers' voice is amazingly confident for a first novelist. Her journalist's eye for human detail draws you in, and makes you care about the people who populate the LUCID world. The more I got to know them, both awake and asleep in the world of lucid dreaming, the more time I wanted to spend in their world."
~ Jeff Howard, writer for Film District and Focus Features.

Natalie Roers is a veteran writer, voice artist, and on-air personality. A journalist by trade, Lucid is her first work of fiction. She is busy at work on her second novel and hopes to raise money and social awareness for worthy causes with each book she writes. Natalie plans to donate a portion of every sale of this book to her favorite anti-bullying organizations. She lives with her husband Cory, and son Austin, in Columbia, South Carolina.