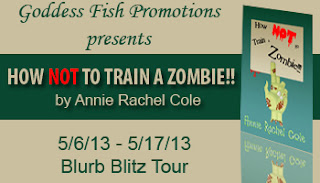 Today we're visiting with author Annie Rachel Cole on her tour with Goddess Fish Promotions for the middle grade novel, "How Not to Train a Zombie".

The author will be awarding a $25 Amazon gift card to a randomly drawn commenter during the tour, so leave a comment today and follow the rest of her tour here.

How does a thirteen-year old become the most popular kid in 8th grade? He trains a zombie to be a pet... And that's exactly what Max Taylor plans to do, even if he had to lie, steal, and lose his best friend in the process.

“That’s not only the stupidest idea I’ve ever heard, but it’ll get us in all sorts of trouble.” Chad’s nasally baritone voice blasted its way through the crowded hallway. Only the clanks of locker doors slamming shut were louder, but not by much.

Up and down the hallway, students turned and stared at Chad and Max. Some pointed and laughed, but most just ignored them as if they didn’t exist.

“Sheesh! Can you talk a little louder? I don’t think they heard you in the band hall.” Max’s face turned several shades redder than the lockers lining the wall. This wasn’t exactly the kind of attention he wanted, especially not after yesterday’s Career Fair. How his mom found out about it, was beyond him. He had thrown away the first flyer asking for volunteers to speak to his class about their careers over a month ago, and he made sure to throw away every flyer he had gotten since then.

But somehow she found out.

And yesterday, she showed up in a bright pink flower shirt and her overalls and talked to the class about the joys of being a gardener. Max wanted to die. Gardening wasn’t even her career. It was her hobby! And everyone knew it. And then his mom singled him out when she left. Shaking hands would have been okay, but is that what his mom did?

She hugged him in front of the whole class. Even having Eddy Pratt’s dad talk about being a zombie exterminator couldn’t erase the embarrassment and humiliation Max endured the rest of the day. 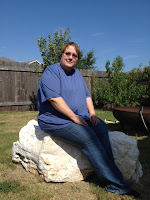 I live in Texas with my husband, son, and two cats who think they run the place. I read, write, play Texas Hold’em poker (I'm actually part of a local league), and occasionally I compete in BBQ competitions with my husband. Our team name is Outcast Cookers. I also teach in a public school.

My likes include: a wide variety of music (see my play list for book 2 on my blog), Star Trek (My son got me a signed picture of Patrick Stewart which sits on my desk.), Star Wars, Grimm (TV series), winter (though we don’t have snow), the holiday season, coffee, hot tea (with cream and sweetener), pizza (no anchovies though), puzzles, Edgar Allan Poe, Ray Bradbury, and JK Rowling.