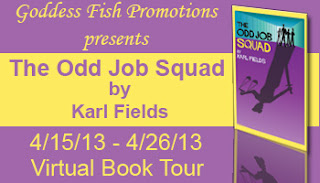 Today we're visiting with author Karl Fields on his tour with Goddess Fish Promotions for the middle grade novel, "The Odd Job Squad".

One commenter from each stop will win a box of "Pinks," which are pink fortune cookies that Ander, the main character has a fondness for. One $25 Amazon gift card given to one random commenter at the end of the tour, so comment today AND follow his tour! The more you read and comment, the better your odds of winning. The rest of his tour stops are here.

Karl answered many of my prying questions -- thanks!

A chocolate, chocolate chip cookie fresh from the oven.

Three things:
Start writing sooner,
Start saving sooner, and
Do NOT blow it with Dianne Star. She totally likes you.

Mine is a great house to hit up on Halloween. It varies, but you count on things like Snickers, M&M’s (peanut), Butterfingers, Skittles and Starburst.

I want x-ray vision so I can go to the casino and clean up playing blackjack.

Hunger Games all the way! Dystopian fiction just doesn’t get much better. I think it’s a series that will stand up over time. Sparkly vampires? Not really my thing, I guess.

The Amazing Race. Having done some growing up abroad, I think it would be awesome to visit some of the places they send contestants. And I wouldn’t be one of those people who gets all mopey because the locals don’t speak English. Duh, you’re in another country dude.

Four eighth graders operate an anonymous revenge club at their school, but things get ugly when one of them learns he’s not-so-anonymous.

Whatever California Pizza Kitchen puts on their Thai chicken pizza. I swear, it’ll change your life.

When he’s not struggling with algebra, Ander is the leader of an anonymous revenge club that operates within the walls of Marina Middle School. Got a beef with a classmate? Shoot Ander’s crew an email and, if your case if legit, they’ll deliver some retribution on your behalf.

It’s not easy to right wrongs and stay under the radar at the same time. That’s why Ander developed three simple rules designed to keep him and his friends from blowing their cover.

But when Ander spots the opportunity to settle an old score of his own, he ignores his own rules, setting off a chain of events that threatens to blow his cover, and it’ll take all the butt-kicking, detention-dodging skill he can muster to keep a lid on his secret.

Karl Fields is a writer of fiction for teens and young adults. His other interests include jazz, golf and collecting flash drives, the more unusual the better. He was an army brat and by the seventh grade, he had attended six different schools on three continents. His first book, The Odd Job Squad, is about the exploits of three eighth graders who operate an anonymous revenge club at their school. He recommends that you not attempt the stunts portrayed in this book. His second, Instant Preplay, is about a boy who discovers that his DVR records shows before they air. He recommends that you get one of those if you can.