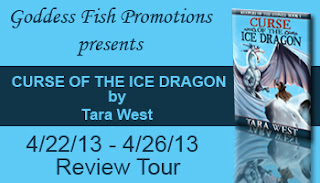 This review is done in conjunction with the author's tour with Goddess Fish Promotions. Tara will be awarding an e-book in her YA paranormal Whispers series, Visions of the Witch to a randomly drawn commenter at every stop, and a $25 Amazon gift card to a randomly drawn commenter during the tour, so leave your thoughts here and you're entered! If you want more chances to win, visit the rest of her tour stops here.

From the bestselling paranormal author of The Whispers Series comes a new fantasy saga.

Born with mark of the Mighty Hunter, Markus has the skill and strength to feed his people, but not to confront his own tyrannical father. Shamed by his cowardice, Markus releases his frustration on the forest creatures.

The village prophet warns that Markus's reckless ways will bring down The Hunter’s Curse, and for every animal Markus kills, his loved ones will suffer the same fate. When the warnings go unheeded, the Sky Goddess unleashes her ice dragon. Now Markus must flee the dragon without killing it or his beloved brother will die.

Markus's flight takes him to the lands of the mysterious Ice People. There, the beautiful maiden Ura helps Markus learn the compassion and courage he needs to face the wrath of the Goddess, but the final confrontation will not be without price, as Markus must choose between the life of his brother and the fate of the girl he loves.

I love YA Fantasy so I was very excited when Goddess Fish Promotions offered me the chance to read Curse of the Ice Dragon. And, I was not disappointed.

Markus, the main character of the book, was born with the mark of the Mighty Hunter--and is the pride of his father; a stark contrast to his older brother, Alec, who was born weak and infirm. However, Alec has a gentleness to balance the darkness that their father nurishes in Marcus.

However, Markus' life is also cursed...and the novel tells of his journey to save his brother and spare him from death.

This is a novel that sweeps you in and makes you keep the pages turning--Markus is a hard character to like in the beginning of the book. He not only is a "Mighty Hunter"...he takes pleasure in the killing for the sake of killing. It's only when his actions are shown to have a direct reaction on his own family and his brother is threatened that he realizes something has to be done.

The world building in this book is masterfully done and, just when you think you know what's going to happen, Ms. West throws a twist in the plot.

The growth in Markus' character is also well done and believable. I'm glad this is the first book of a series---I'm looking forward to reading more.  Appropriate for tweens and teens!

He gasped as the old man’s eyes shot open. Deep within his sunken orbs, Markus thought he saw red. Dafuar’s incantations grew louder, until Markus could finally discern the lyrics of a poem.

“One fell shot from the bow

And many will know Madhea’s curse has descended

Omens will fall to family

And all the cruel hunter has befriended

For each life he claims

His kin suffers the same death by similar strand

For she will allow neither beast nor fowl

To be hunted by his hand

To the hunter who reaps his fill of kill

And nary none from need

Beware her beast who wakens to feast

On avarice and greed

In the embers of demon’s fury

Of any at her mercy

Sad is the tale that is known so well

The hunter who slaughtered with pleasure

His heartless crime was recompensed

For discarding the forest’s treasure”

Once again the healer closed his eyes, and when they reopened he shook his head and blinked several times, acting as if he’d woken from a dream.

Markus remained standing, his feet like granite stones planted firmly on the ground. Fear had sent ice through his limbs and weighted his body to the spot. Had Dafuar really had some kind of vision? If the man’s intentions were to spook him, he’d clearly succeeded.

With clenched fists, he spoke through gritted teeth. “Your parables are not amusing.” 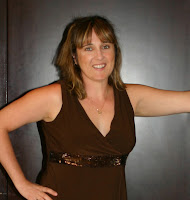 A former Texas high school teacher, I enjoyed coaching the writing team and even the hectic deadlines that came with running the school publications. After taking a break to raise my baby girl, I now work from home as a novelist and a part-time graphic designer. In my spare time, I love to read, exercise and spend time with my family and friends.

I would love to hear from my readers!