Please welcome author JC Emery on her tour with Bewitching Book Tours today for her New Adult Urban Fantasy, Anomaly. Thanks for stopping by and answering some of my questions!

Why write in your genre? What draws you to it?

There’s something so unique about that place where you think you know the world as it is but you’re too cocky and young to know that you’re wrong. You can’t see around corners and everything that happens is a life-or-death, end-of-the-world, def-con-five crisis. Once you grow out of that there’s no getting it back. I like to play with YA and NA because it brings me to the youth I didn’t have but always wanted—one filled with adventure and romance and even a little danger. It’s the safe and sane way of reliving my adolescence.

From the Mixed-Up Files of Mrs. Basil E. Franweiler. I loved the idea of striking out on my own and being independent, living in a museum, and turning life into one big adventure. I liked the Babysitter’s Club as well, but by the time I was 9 or so I wanted something a little edgier (I was that kid.)

I would (try) to tell her that even though she doesn’t see it right now, that’s she’s amazing. I’d tell her to let go of the chip on her shoulder because people really do like her. I’d tell her to hug her family more, fight less. I’d tell her to pay attention to her little sister as she grows because one day she’ll be a teenager and no longer think she’s so invincible. I’d tell her that even though the choices she’s going to make have pitfalls, that where she’s going to be at 30 is amazing and that I wouldn’t change a thing and she should enjoy the next fifteen years. They go by so fast. I hope that would at least get through her thick skull and resonate some with her.

The Hunger Games. I like Twilight, don’t get me wrong. But Katniss’s story is about so much more than figuring out how to be with a boy forever. She literally fights for what she wants and needs. I like that she’s a bit rougher around the edges and her devotion to her sister is beautiful. I can’t even tell you how many times I cried during the trilogy because of the bond Katniss feels for Prim.

Does Double Dare count even if it’s no longer on the air? Actually, as much as I love Myrtle Manner I’d be scared of turning into one of those internet memes I see all over the place. No reality television for me! I say way too much dumb stuff to be caught like that.

I’d spend the entire summer road-tripping around the U.S. I’d make it a very relaxed affair. But then again, I have to admit that spending a summer along the Pacific Coast and writing my little heart out to the sounds of the ocean every day sounds pretty awesome, too.

Holden Caulfield (from Catcher in the Rye), Napoleon (the Pig from Animal Farm), Peeta Mellark (from The Hunger Games)… I love Katniss but I can’t imagine she and Napoleon could broker a peace treaty long enough to sit at the same table, and finally I think I’d have to go for Tack (from Motorcycle Man by Kristen Ashley). But it’d have to be Tack BEFORE he got with Tara because then he’d have no interest in flirting with me and that just won’t do.

This is an easy question! I’d get the tattoos I’ve been wanting and my dream auto collection: Jeep Wrangler CJ-7, Chevy Tahoe, Dodge Charger, Harley Sportster. I’d also buy a house in Northern California (north of Sonoma) or somewhere in the Pacific Northwest and I’d make sure it had a pool. I’d buy up a bunch of stuff I’d need (can I buy gift cards for stuff like gas?) and stockpile tons of food stuff. After I had everything I needed (and apparently every vehicle I can dream of) I’d buy my mom a house and give a bunch to my sister to pay for her college. 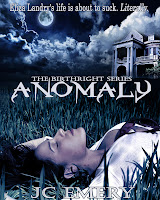 How far would you go to save your sister?

Life as a college senior is stressful enough. Between mid-terms, stupid boys, and a rare blood condition, Eliza Landry is just trying to figure out what normal is—whatever that means—when she discovers that vampires aren’t just a thing of legend.

In a matter of moments, her life changes forever when she and her older sister Kate suffer a vampire attack which leaves Eliza with two puncture wounds on her neck and an allergy to sunlight. But she’s still human, or at least she thinks she is. It doesn’t really matter—her main concern is that her sister is missing.

Sorrow turns to obsession, leading Eliza to piece together the puzzle of that terrifying night. Even stumbling upon a millennia-old vampire assassin named Luke Conrad who either wants to kiss her or kill her (she can't decide) cannot deter her.

When bodies start piling up and one of them is supposedly Kate, Eliza and Luke set out to discover who is behind the attacks. Soon, Eliza is drawn into the dark and dangerous world of the undead, with no guarantee she’ll make it out alive, and no doubt that she won’t like what she finds.

About the Author:
As a child, JC was fascinated by things that went bump in the night. As they say, some things never change. Now, as an adult, she divides her time between the sexy law men, mythical creatures, and kick-ass heroines that live inside her head and pursuing her bachelor's degree in English. As it is for most writers, finding balance is a challenge. JC is a San Francisco Bay Area native, but has also called both Texas and Louisiana home. These days she rocks her flip flops year round in Northern California and can't imagine a climate more beautiful.
With the support and encouragement of her parents and sister, JC set out to figure out what she wanted to do when she grew up. Most days, the jury is still out; however the thing that stuck with her no matter what she pursued was her love of the written word.

JC writes adult, new adult, and young adult fiction. She dabbles in many different genres including science fiction, horror, chick lit, and murder mysteries, yet she is most enthralled by supernatural stories-- and everything has at least a splash of romance.