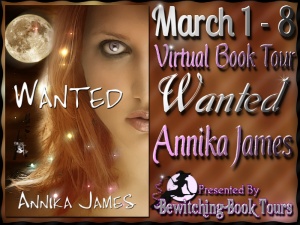 Please welcome author Annika James on her tour with Bewitching Book Tours today for her paranormal YA"Wanted". The author is awarding FIVE eBook copies of "Wanted" to commenters on her tour, so make sure to say hello and complete the Rafflecopter giveaway at the bottom of this post!

I taught middle school for 6 years and coached high school for over 10 - it was just kind of what I knew. Spending all that time with teenagers has a tendency to immerse you in their world. Plus, I was reading a lot of YA at the time that I started writing WANTED, and it kind of just came. I enjoy writing high schoolers because I enjoy the struggles of learning who you are and where you fit in. There’s something about that first taste of romance that is so much fun to write. There is so much potential there, and so much innocence, sometimes it’s more fun to see the world from the eyes of a teenager.

I loved to read! My absolute favorites were L.J. Smith’s “The Secret Circle Trilogy” and anything by Christopher Pike. I also loved “Camp Girl Meets Boy” by Caroline B. Cooney. I can also remember reading some of the Couples series - I think that was a series of books written by different authors.

Secretly, I always wanted to be a writer - that was like my dream job. I say secretly because people were always skeptical whenever I gave that as my answer. So I stopped saying “writer.” The other answers I gave varied from forensic scientist to zoologist to teacher. I still want to be a writer when I grow up. :)

Ahh, we’re so bad… we take the kids out trick-or-treating and avoid having to pass out any candy ourselves. :) I would definitely give away chocolate, though - maybe Reese’s - I’d want to be the cool house. :)

Non-fat latte - no flavor. I love coffee, and coffee with milk is just even better. The absolute best is actually a drink they serve in Madrid - they pour the coffee and steamed milk into your mug at the same time, it’s divine, and I just haven’t been able to recreate it here.

I would probably bring Matt. He’s strong - he could help build shelter and hunt and all the manly stuff while I work on my tan. :) Plus, he’s funny, he’d keep me entertained, and we could talk sports when I wasn’t watching him try to start a fire with 2 twigs like on Survivor. :) And, hello, eye candy. It has to get boring on a deserted island - I need something nice to look at.

Either Canadian bacon and pineapple - or a chicken bacon ranch pizza with a white sauce. I’m not big on the red sauce on my pizza, so I try to get light sauce. I’m the only one in my family who like the Hawaiian, so I usually get my own half a pizza all to myself.

Hands down - any English class. I love to read, love to write, love to analyze literature. I loved every English class I had -my absolute favorite was Humanities - we studied not only literature, but other art and culture throughout history. It was such a great class and introduced me to so much culture. 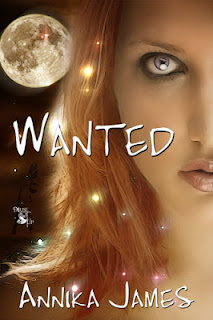 Attacked as a young witch and left for dead, Ashlinn is deathly afraid of being bitten again. Having survived until she’s almost eighteen without donating blood to any of her vamp friends, Ashlinn figures she’ll continue to live bite-free.

After her crush reveals how powerful she is, however, the Vampire Council declares she be claimed as a familiar, which requires biting. Ashlinn doesn’t want to be owned, even by hot vamp, Conor.

Luckily, her best friend, Matt, volunteers for the job. She is given one week to choose her protector, and the list of willing biters keeps growing. Will she go with best friend Matt, hot vamp Conor, or someone else to protect her? Will she be able to get her power under control by then? Will she overcome her phobia of being bitten? And who says she needs to be protected, anyhow?

He leaned toward me, holding my gaze with his. I forgot how to breathe, how to think. Then his lips touched mine, electricity exploding up and down my body.

Soft and gentle, they probed, tasting, testing. I didn’t move to touch him, just remained frozen. There was only the kiss. His mouth moved to my jaw, kissing his way down to my neck. His teeth grazed my skin.

I unfroze and found my voice. “No!” I felt a surge of power push through me.

Conor flew backward across the room. He crashed into a bookcase, sending an avalanche of books over him as he fell to the floor. He slumped there, holding his head, dazed.

He looked up in confusion, mouth opened ready to speak. At that moment, my muscles remembered how to move and I ran for the door. It opened in front of me, not of my power, and Matt appeared. He’d probably felt my surge of power. I hadn’t meant to throw Conor. Panic had overtaken me and I had lost control for an instant.

I flew into Matt’s arms and he embraced me. Matt was my rock. His presence calmed me, it always did. He was like a protective big brother. I knew he understood the whole scene in the seconds before I’d found his arms. I buried my face in the T-shirt pulled tight across his strong chest, and breathed in his scent, a mix of fabric softener and cologne. It was familiarity, it was home, and it helped to center me. I peeked out at Conor. He stepped out of the pile of books and straightened his clothing.

“Is she yours, Matthew? I thought she was unclaimed.” Conor was now being formal. Vamps often addressed each other formally, even the teenage ones. He thought I was Matt’s, and to bite me would have been a serious offense to Matt’s family. I was not claimed, nor would I ever be. Matt’s arms tightened around me.

“No. I told you she’s not claimed. Did you try to bite her?” Each word seethed with anger. I had never heard so much menace in Matt’s voice. He trembled ever so slightly. Wasn’t Conor his friend? I felt like there was something else going on here I didn’t quite get.

“I just assumed she’d agree.” Conor’s voice came from right behind me. “I’ve never been turned down before.” His voice wasn’t cocky, not even confident. He stated it like he’d simply said his eyes were green.

Conor said nothing. Matt must have seen something in Conor’s face, though, because his grip on me tightened, voice outraged. “You didn’t even ask her?” He was furious. I raised my head. There was fire in his eyes, and if looks could kill, Conor would have been so much more than dead.

I turned in Matt’s arms, forcing him to loosen his hold, although he didn’t let go completely. Conor’s brow furrowed, mouth drawn into a tight frown.

“I thought it was what she wanted.” His voice was soft and unsure.

Matt let go to put me behind him, further protecting me. “Ashlinn’s been bitten before. Without permission. Without the aid of making it feel good. Drained. Almost to the point of death.”

I shivered, remembering the night I met Matt. I would never forget the feeling of having life literally sucked out of me, of hovering so close to death. I was so young, at the time I hadn’t really known what was going on. Almost dying, however, would remain embedded in my memory forever. Matt had found me and knew what to do to nurse me back to health. He’d been my protector ever since.

I looked around Matt’s broad back. Conor’s wide-eyed gaze found mine. “I am so sorry, Ashlinn. I offended you. I meant you no harm. I was unaware of your past and thought you were giving me the okay.”

He spread his hands in a helpless gesture. I stepped out from behind Matt, to his side. Matt put an arm around my shoulders, still holding me close. I watched Conor’s gaze slide over the embrace to Matt’s face, before coming back to mine. He had apologized, now he waited for me to say it was okay.

“I suppose I probably was.” My voice was soft, though not wobbly. “Though I didn’t mean to.” I was pretty calm now, thanks to Matt. And I was almost sure Conor wasn’t going to attack me. I had unknowingly given him the green light, forgetting he wasn’t just a normal boy, and this wasn’t just a normal party. I liked him so much, I had sent him signals that probably seemed the same as “Bite me!”

“Sorry I threw you across the room.” I did feel bad. I hadn’t meant to hurt him.

Matt looked at me as Conor smiled slightly. “I deserved it.” Some of the confidence returned to his voice.

“It was quite impressive.”

“You did that?” Matt sounded surprised and a little proud. “Your power?”

I nodded. “I guess the panic took over. I reacted without thinking. And there he was, flying, crashing.” I gestured from where I’d read the poem to the pile of books on the floor.

Matt’s smile was big and genuine. “That is awesome, Ash.” He gave my shoulder a small squeeze.

Conor took a step toward us. I didn’t flinch. I knew he meant me no harm. If he had bitten me, my mind knew it would have felt amazing, completely opposite of how it had felt the last time I was bitten. Although, it would still have been against my will, without permission, and that was rape. No one was going to bite me again, ever. Even Conor. I didn’t want to be under anyone’s control but my own.

About the Author:
Annika James lives in small-town Wisconsin with her husband and two beautiful kiddos. She spends her days working to pay the bills and her nights dreaming of more fun ways to do so. Her passions include writing, reading, music and traveling with her family. She dreams of a world where vampires and powerful witches really exist, because life would be so much more interesting.


a Rafflecopter giveaway
Posted by Books in the Hall at 6:01 AM