Lords of Prophecy by Michael A. Rothman - Review Tour and Giveaway 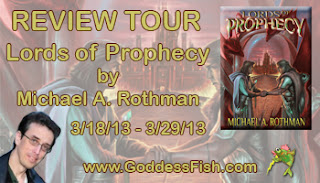 This review is done in conjunction with the author's tour with Goddess Fish Promotions. Michael will be awarding a $50 Amazon GC to one randomly drawn commenter during the tour, so leave your thoughts here and you're entered! If you want more chances to win, visit the rest of his tour stops here.

The Riverton brothers have completed their training, and despite their own personal skills, they worry about the forces arrayed against them. Knowing the barrier that's kept the people of Trimoria safe for over five centuries is weakening, the brothers ready their ragtag army of humans, dwarves, and elves for battle.

In the meantime, on the other side of the ancient barrier, a growing army of demons have readied themselves for the final battle against the people of Trimoria.

As the barrier weakens, Ryan is struck by bouts of debilitating madness. As the barrier crumbles, so does the hope of Trimoria's citizens.


My Review:  The sequel to Tools of Prophecy is new and exciting as the Riverton family is making final preparations to battle the demons clustering at the breaking barrier between demon and men. The two brothers, Aaron and Ryan, newly married and preparing for the final battle, run into trouble during the preparations. Will they be able to break through the multiple challenges that test their ability to even survive? With the shocking cliffhangers and jaw dropping twists in the story, Michael A. Rothman has done it again, creating the perfect tale combining fantasy with a dash of suspense and a pinch of romance.

What I liked about the book was that it had those moments where you are wondering what is going to happen…and something completely unexpected jumps out at you instead. I also enjoyed the trips the two brothers took around Trimoria; I enjoyed getting a better glimpse at the land itself. I do wish there had been some more action in the book consistently, since they are getting ready to fight, but there were still good moments where you wondered if something else was behind the evil you already knew existed.

I'm a little sad this is apparently the final book in the series, as I've grown to really love the Riverton family. I hope Mr. Rothman had more adventures in mind for the land of Trimoria.

I recommend this book and the series to middle grades (and older!) who enjoy reading action/adventure and fantasy stories.

A light-hearted scene where the main characters are watching their youngest siblings interacting with a mysterious young dwarf.

As the soldier affirmed the order, Ryan turned toward the window and watched the children.

Zenethar, the king’s son showed the dwarf a wooden block. “Can you float this around? I wanna do my archery practice.”

Zenethar tossed the block to the dwarf and Ramai caught it, letting Maggie drop as his interest in the doll waned. “Maggie!”

Rebecca ran over, dusted her doll off, and gave her a hug. She sat back on the pillows and watched the boys.

Ramai studied the plain wooden block and looked puzzled. “Is this a fun game?”

Ramai levitated the block and allowed it to float aimlessly around the stone chamber.

Zenethar flicked his finger and a sparkling bolt of energy flew at the block, hitting it and sending the wooden toy spinning.

Rebecca laughed and clapped with glee. “You got it Zenny! Do it again!”

Ramai smiled as the block moved around and the darts of energy flew throughout the room. When he increased the speed of the movement, Zenethar missed, leaving a tiny scorch mark on the stone ceiling. “This is a fun game!”

Ryan muttered to his brother. “This could get out of hand quickly.”

Aaron covered his mouth, suppressing the sound of his amusement as he watched the dwarf challenge Zenethar’s aim. Rebecca screamed with laughter.

Aaron leaned over and whispered, “Let them have fun. They can’t exactly burn down a stone castle.”

The wooden block swooped down and Zenethar accidentally sent a bolt of energy at Ramai. The bolt bounced off of his white robe and singed his beard.

Ramai slapped at his beard, as Zenethar’s face went from amused to shocked. With a puff of smoke coming from his beard, the dwarf announced, “That is not a fun game!”

I've been writing throughout my career as an engineer, however my writing had been relegated to technical books and technical magazine articles. Heck, you might even find a couple of those musty tomes still for sale if you look hard enough. With my foray into epic fantasy, I've shed the shackles of technical writing and created novels that I hope will be attractive to a much wider audience.

I've always admired truly epic tales. You know the ones I mean. The book you crack open, wander through and utterly get immersed in. The story takes you on twists and turns you never expected, run into dead-ends that make you wheel your arms backward to prevent you from falling into an endless abyss. By the time you reach what you think is the end, you've read hundreds of pages and realize the end is really only the beginning of the story.

You close the book and wonder out loud. "Do I have the next book? Is it out yet?"

My goal when I started writing the first book (HEIRS OF PROPHECY) that involved the Riverton family was to make a story that would allow a younger audience access to such a tale. Since then, a second book (TOOLS OF PROPHECY) was released, and now I introduce the third book in the series with LORDS OF PROPHECY.

As to my other writing activities, I've completed another as of yet unreleased novel in the Prophecies series, and they are scheduled to be released as soon as - well, as soon as the paperwork on them is complete, and the lawyers nod their heads up and down.

I hope you enjoy the novel.

In the meantime, if you want to see my ramblings, I lurk at the following social media portals: