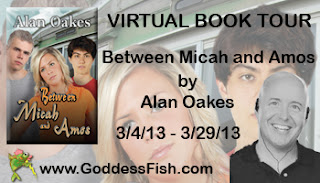 Today we're visiting with author Alan Oakes on his tour with Goddess Fish Promotions for the YA novel, "Between Micah and Amos".

Alan will be awarding gift cards to three randomly drawn commenters during the tour. The characters are always going to Sonic – so he is giving away gift cards in the names of the main characters: Grand Prize: Billy-sized $25.00 2nd Prize: Manuel-sized: $15.00 3rd Prize: Ashleigh-sized: $10.00 If the winner prefers, they can get either an Amazon or BN.com gift card instead of the Sonic card. , so comment today AND follow his tour! The more you read and comment, the better your odds of winning. The rest of his tour stops are here.

Alan answered many of my prying questions -- thanks!

I would spend a quarter of it to buy a nice house out in the country. I would spend about another ten percent making the place beautiful and maybe get a couple of horses. The other two thirds, I would buy other houses and rent them out so I would have nice steady income and not a care in the world!

You’re stranded on a desert island – which character from your book do you want with you? Why?

It’s gotta be Billy. Any guy who has a shotgun rack in the back of his pickup, you know is going to be a good hunter. He could do all the fishing and deboning the catch – which just grosses me out! Have you ever deboned a fish?! Yuck! -- But you know he would be into it. And he could make a fire too from nothing.

Playlist for your current book?

It is all about classic country music!

When Billy and Ashleigh are out driving in Billy’s pickup in the country, with the windows down in the late summer night, it is Garth Brooks, Ain’t going down (til the sun comes up)

When Ashleigh and Manuel take his truck out to his family’s spring fed pool to go skinny-dipping, it’s Mongomery Gentry, All night long.

When Ashleigh runs out of gas and goes into the Gas N Go, and comes onto the man behind the counter to try to get some gas for free, it is Trisha Yearwood, Thinkin’ about you.

When Billy and Ashleigh head over to Stan’s Roadhouse, home of the chicken fried steak, they hear covers of The Fabulous Thunderbirds, Powerful Stuff and Willie Nelson, Blue eyes crying in the rain.

Pretend your protagonist is at school and opens her locker – what will she see inside?

A box of condoms! (How did Ashleigh’s momma get her locker combo?!) Ashleigh would also be smart enough to have a fresh change of clothes in case she didn’t make it home the night before. If Manuel somehow got her combo – look out! She may find a black velvet box with a promise ring…

What candy did you give out at Halloween?

I have spent years studying what is hot and what is not when it comes to Halloween candy. You would think that all things chocolate would go fast. (Not so!) And then – god forbid! – you give a child something with nuts in it and they have one of those allergic reactions where their heads swell up to the size of a basketball. That is why I have scaled down my offerings to the most popular and least life-threatening candy – Skittles and Starburst. I still have some Starburst leftover, btw. Come on by if you want some!

I don’t know if your young readers know this show – but back in the day, The Golden Girls were our favs! All the world had to stop on Saturday nights at 8pm to see what Rose, Blanche, Dorothy and her mom were up to. To think now the show comes off as cute, when in the olden days, it was so ‘edgy’.

Let’s go to Cozumel everybody! Somehow I would smuggle my handsome golden retriever, Winston, onto the Mexican island as well. We would all stay at a hotel on the turquoise blue waterfront. We’d go snorkeling and scuba diving during the daytime. At night, we’d get a fire going on the beach and there would be lots of making out! (Winston would even find a beautiful Mexican Chihuahua to nuzzle.) Ahh, paradise…

Okay, I can’t cook worth a damn. Poptarts are my specialty. But I would love to be on Master Chef. To become one of the finalists, I would open my box of strawberry glazed tarts, and with tender care, put two of them into my Michael Graves signature toaster from Target. When they were perfectly warm and ready, I would ‘plate’ them on contrasting, eye-catching china. Gordon Ramsay would allow the delicious fragrance of the tart to waft into his hyper-sensitive nostrils as he took a liberal bite. I would close my eyes in anticipation-- and then -- hear him say that word that gives all potential Master Chefs chills – “STUNNING!” I would start to tear up…”ABSOLUTELYSTUNNING tart!!”

What is your favorite hot beverage? Why?

I was at a bar in Austin with friends who insisted I try a hot apple cider toddy. Did you know toddies are some of the first cocktails every created way back in the 1860’s? -- But I digress…. A hot apple cider toddy is basically whiskey mixed with warm apple cider, with a cinnamon stick added as a swizzle. It knocked my socks off! Really! I don’t know where they went…They were a nice pair of socks too… 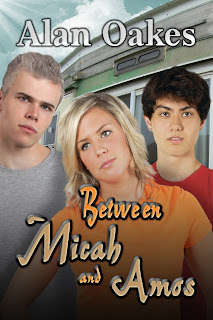 Like a flash, the discharge from the gun lit up the inside of the dimly lit, filthy trailer Ashleigh called home. Ashleigh sat curled up on the stained pink carpet next to the pull-out bed in the living area where she slept. The victim lay dead, slumped against the wall of the trailer. Ashleigh looked at the motionless body. She was petrified.

Meet Ashleigh Mae, a seventeen year old high school senior living in the small town of Micah, Texas. Her boyfriend Billy calls her a wild child. Her momma is always telling her she makes bad choices. No matter what, no one really understands her.

Ashleigh dreams of a life with Billy. Their love is true, she thinks. When her mother forces them to leave Micah in the middle of the night and move in with her momma’s old boyfriend Casey, on the outskirts of a town called Amos, Ashleigh’s life is torn apart.

This is her fight to get it back….


“Good night,” Billy said to Ashleigh as the two were sitting in the parked truck. She held onto him tightly as he kissed her.

“’Night,” she murmured, sliding across the seat and opening the door. “Call me,” she added, her heart filled with sadness that she would be left alone again.

Ashleigh closed the rusted door to the pickup. Billy turned the truck around and drove off. Ashleigh was left alone again in the silence of the night. She made her way to the trailer, looking down so as not to trip on any of Casey’s debris.

“Where the hell have you been?” Jo Lynn bellowed, scaring the crap out of Ashleigh. Her mother was sitting imperiously on the half built deck in front of the trailer in a plastic chair, like a queen on her throne.

Ashleigh walked up to her mother and could see a half-finished bottle of Jack sitting on an old apple crate by her side. Jo Lynn took a drag from her smoke.

“I asked you a question… Come closer,” Jo Lynn demanded.

Ashleigh took one step closer. “I was out with Billy,” she answered apprehensively.

“You smell like sex!” Jo Lynn said, taking another drag from her smoke.

“While you were out whoring, guess who came by to visit?” Jo Lynn said dramatically.

“Child Protective Services, that’s who!” Jo Lynn took a swig of her glass of Jack.

“Out of nowhere, too!” she continued. “Casey’s ready to beat the tar out of you! He had to flush all his stash down the toilet!”

Alan Oakes is a Graduation Coach and Counselor at a Texas High School. He is a featured writer for Green Building and Design magazine and a contributor to other magazines including Texas Architect and New American Luxury. In the past, he served as Associate Pastor of Saint Austin Catholic Church and Director of Catholic Campus Ministry at UCLA.

To learn more about the author, feel free to go to his website: http://www.alanoakes.net/