It Started With a Whisper by A. W. Hartoin - Virtual Review tour and giveaway 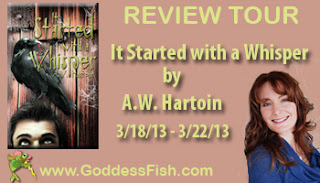 This review is done in conjunction with the author's tour with Goddess Fish Promotions. A. W. will be awarding a $10 Amazon GC to a randomly drawn commenter during the tour, so leave your thoughts here and you're entered! If you want more chances to win, visit the rest of her tour stops here.

It Started With a Whisper by A. W. Hartoin
Young Adult Fantasy
376 pgs
4.5 Stars

Wishes are powerful things, if you belong to the MacClarity clan. You can ask Ernest for anything and he’ll make it come true, even though he’s been dead for nearly a hundred years. Puppy MacClarity doesn’t take the rumors about Ernest too seriously. But when he’s had enough of his teacher’s harassment, Puppy asks Ernest to take care of Miss Pritchett for him. Ernest does and family secrets start to surface like magic. During a summer filled with both fear and fun, Puppy begins to realize that Ernest isn’t the only special thing about his family, and their oddities aren’t just skin deep. Too bad he didn’t know sooner.


My Review:   The characters in this book completely engaged me and made It Started With a Whisper thoroughly enjoyable.

While the story line would be suitable for mature middle graders, this might be more appropriate for teens as there is a lot of cursing, under-age drinking, and talk/thoughts of sex -- which is part of what makes the characters come to life. The teens in this book think and act like normal teenagers. What 14-year-old boy doesn't have a crush on a good-looking 17-year-old girl? Or think of girls' bodies? It's normal and it's very much a part of this story.

One thing that's different about these teens is they come from a family that is--to put it mildly--eccentric and magical. And, they stick together against all outsiders--except when they are trying to kill each other.

It's an easy book to read--I was able to read it in one sitting, which is rare for me. It's interesting, well-written, and the characters are engaging. I certainly hope this author has more stories about this family planned--I want to learn more about them!

Mom cut my hair at the beginning of every summer with a pair of rusty old clippers, once used on a poodle named Ragamuffin. She didn’t see anything wrong with that, even though the clippers cut odd furrows and missed some of my hair altogether.

I stretched out across the kitchen island between flour sacks and stacks of well-worn pots, shivering as the small strip of skin between my uniform shirt and pants touched the frigid zinc countertop. There was no escape. When I was younger, I tried running away, or hiding in the storage closet with the rest of the family’s odds and ends, but Mom always found me in three minutes flat. I think she had a secret weapon, it might’ve been Ernest, but I was never sure.

Mom didn’t look at me, but continued to search through a drawer filled with rusty egg beaters, broken crayons, and bits of jagged scrap metal.

“You’re not too old for anything until I say you are,” she said.

I picked a walnut off a loaf of zucchini bread and popped it in my mouth. “Can’t I go to the barber like other people?”

Mom smacked my hand as I went for another walnut. “Why would I pay someone to cut your hair, when I can do it for free?”

Then she discovered the clippers in the back of a drawer with dog hairs still sticking out of the blade and pulled me upright. She switched it on with a look of triumph and my curls rained down around me, sticking to my sweaty arms and tickling my neck. After Mom finished, I ran my hand over my head. Spiny hair pricked my fingers and I sighed. It wasn’t so bad. If I could stand being called Puppy, I could stand anything. My real name was Ernest and that was worse. Mom nicknamed me Puppy when she was potty-training me, because I kept peeing all over the house. She loved telling everybody the origin of my name, so the hair wasn’t so bad in comparison.

A.W. Hartoin is the author of the Mercy Watts mystery series and the Away From Whipplethorn fantasy series. She lives in Colorado with her husband, two children, and six bad chickens.