This post is part of a virtual book tour organized by Goddess Fish Promotions. T.X. Troan will be awarding a $15 Amazon/BN GC to a randomly drawn winner via rafflecopter during the tour. Click on the tour banner to see the other stops on the tour. 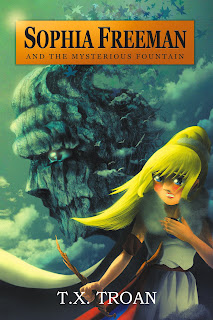 What begins as a special trip for eleven-year-old Sophia Freeman and her father, leaves her trapped on a mysterious island with a tree boy and fantastical creatures. Later, she learns she is dying from an eternal curse and the only way to prolong her life is to drink the island’s sacred water. Can Sophia and her companions reach the fountain and defeat the guardian before time runs out? 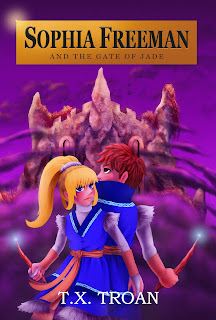 Book 2:
THEY MUST RISK IT ALL TO REGAIN THEIR FREEDOM ... OR BE SEALED AWAY FOREVER.

Sophia Freeman and her best friend, Tim Charnal, must beat all contestants in a three-round Beyond Event organized by the mighty arbiters to free him from the penalty of murder and gain the islanders' trust. Entering the hologram and surviving environments filled with everything from hammer-throwing cave giants to a slimy tentacled sea monster, they will need all their courage, wits, and skills. But how are they going to win when magic is forbidden? 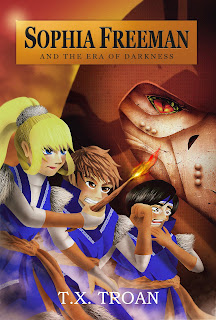 With the increase in deaths of Pandilone Islanders, the arbiters devise a strategy to free the god demon within five days to lift the Eternal Curse. All goes as planned until iron-masked creatures kidnap magic users, weakening the army. To gain reinforcements, Sophia Freeman, Tim Charnal, and rescued Allen Chan must gather all six items to cast the Dream Spell, connecting them with Sophia’s father and his air force. But how can the trio succeed in time while surrounded by enemies and traitors aiming to stop them at any cost?

Another flaming whip slashed between Sophia and Tim, and they swiftly dodged it. Who could possibly be using Dark Art spells? They looked over and saw Allen’s smoking wand in one hand and Sophia’s scroll in the other.

Sophia raised her hand like Dad did to her, to silence him.

“Allen, can I have my scroll back?” she asked calmly, easing toward him.

“Did you hurt yourself?” Sophia asked. “Do you feel any different?”

“Interesting—could you show us how you did that spell?”

Allen gave her a puzzled look. “You mean I’m not in deep trouble? Uh … sure.” He shifted into the attack position and shut his eyes.

“Sophia, I don’t understand—why are you wasting our time?” Tim demanded.

“Shh … Mona was right—you should really work on your temper.” She kept staring at Allen without blinking. “Just watch.”

A moment later, a strong gust howled past them as his wand lit up.

“Allen, break that tall boulder with roots wrapped around it!” Sophia shouted.

He struck with an aggressive roar. “HELLFIRE LASH!” The third flaming whip was unleashed, and it was much bigger than the previous two. It struck directly at the target.

The spell left a hole through the boulder the size of Allen’s fist.

“Wow, that was impressive,” Tim mumbled.

Sophia handed him the scroll and turned to Allen. “Do you feel any different this time?”

Admiring his wand, he said, “Yes, I felt … confident. Something I didn’t think was possible.”

I get it—he’s attracted to Dark Art spells! At that instant, an absurd idea came to her mind. 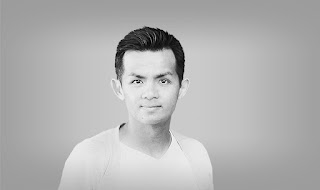 Thuan Doan was born in Indonesia, and grew up in St. Catharines, Ontario, Canada.

Thuan has been fascinated by art from a young age, especially fantasy. He would wake up hours before school, sit outside the classroom, and scribble in his sketch book.

After college, he worked on a series of jobs, including: an advergaming association as a storyboard/concept artist, gaming company as lead concept artist, and graphic designer for various clients.

Thuan conceived his first middle-grade fantasy novel, Sophia Freeman and the Mysterious Fountain, during a trip to Gabriola Island, British Columbia in the summer of 2013. Then he took his work and settled in a small town of Enderby, where it’s peaceful and quiet. 4 years later, the story is complete. While book 1, 2 and 3 are being shared with the world, he's writing and illustrating book 4 of the Sophia Freeman series.

Thuan is writing under a pen name of T.X. Troan. “X” stands for Xu, his grandmother’s name who passed away. And “Troan” is a combination of his parents' names.

“No matter how this turns out, I want my family to be a part of this wonderful journey.”

T.X. Troan married Sarah, his original fan and longtime love, in 2016. They live in Enderby with their pack dogs and school of fish!