Call Me Obie by Ateret Haselkorn

This post is part of a virtual book tour organized by Goddess Fish Promotions. Ateret Haselkorn will be awarding a $25 Amazon or Barnes and Noble GC to a randomly drawn winner via rafflecopter during the tour. Click on the tour banner to see the other stops on the tour.

Call Me Obie is a young adult sci fi novel with a strong coming-of-age undercurrent. I wondered what the “closet” of the future could look like and how people like Obie would or could break out of it. In other words, I wasn’t drawn to juvenile fiction directly but felt that the story I was exploring was best told by a fifteen-year old. She was experienced enough to know discrimination but not jaded to the point of accepting it as “just the way things are.” She was also at a perfect stage in her life to face the question of if to let her medical circumstances define her as a person, and how.

The other benefit of juvenile fiction, IMHO, is that it is relatable to everyone who is around the age of the main character and older. While the setting and the details of the problems that Obie faces – organ printing, government healthcare policies, being tracked and tracking others – are innovative, the nature of them – vulnerability, a power imbalance, and the need for privacy and for love – are not. They are timeless and universal.

To Sleep in a Sea of Stars by Christopher Paolini. Paolini has created a world that exists about 250 years in the future – way later than Obie’s life and story take place. He is a fantastic world builder. Since his book is over 800 pages long, I’d like to apologize to whoever is next on the library waitlist for it because there’s no way I’m going to be able to return it on time. I’m trying but, really, it’s impossible. I will aim for less than one week overdue.

I’d love to meet Mateo, my sweet character with one brown eye and one blue eye from a genetic mutation. Mateo’s character arc is subtle and surprising – at first we think he must hate his circumstances and government-mandated public service. Later we learn that isn’t entirely the case and that he’s used his situation very intentionally to help him grow. He is a strong role model from the outset of the book. I’d like him to show me all of his beautiful creations, and to make me laugh because he is a funny guy.

I love this question. When I look at the cover, I think of uplifting, electronic music, like From Far Away by the 16 Bit Lolitas. The book should end on a similar note, maybe Nothing Without You by Tinlicker. In between, I need to have some guitar…how about Rosa Linn’s song Snap and then a retro love song, like Pale Blue Eyes by Velvet Underground to accompany the scenes with Obie’s crush. Finally, I’ll need some current hits that will be considered vintage by the year 2100. I’ll go with As It Was by Harry Styles. It’s a perfect fit for a science fiction tale, especially this one. “In this world, it's just us / You know it's not the same as it was…”

Thank you for having me on your site! 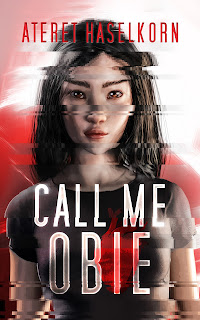 Fifteen-year-old Obie hates the word “artificial.” It has to be the Most Misunderstood Word of the Year 2100. The media puts it in front of anything. They started with artificial intelligence and now it goes with housing, law enforcement, and in Obie’s case, her heart.

Just because Obie’s vital organ was 3D-printed doesn’t mean that she’s fake. She’s simply misunderstood, especially by Humanists. They think that artificial organ recipients like her are an abomination, and that’s why Obie can’t let anyone know the truth about her heart.

But when Humanists injure her best friend Mateo, Obie needs to step up. She decides to get him a 3D-printed replacement spleen in secret. In order to succeed, she becomes a black-market criminal, a high-tech healer, and an authority on love (or maybe not the last one so much). But what else can she do when organs are sold by Jonas, a blue-eyed genius who can’t stand the system any more than her?

Call Me Obie explores the future of discrimination and the timeless power of empathy and forgiveness, with a few comedic mishaps along the way. It is the tale of one young woman’s coming-of-age in a future where nearly anything is medically possible and society must ask: When technology can modify humans, who gets to decide how?

I think that if my heart hadn’t been 3D printed, it would have exploded from fear and nerves. I’d been left, cut off from the outside world, in a room with a frozen robot and a body with a hole in its brain. Security was probably coming down the hall to get me. I bet I had five to ten minutes before I was hauled off, and for what? A brain dissection without a transplant. Now Stella’s parents wouldn’t have to come after my family; we’d all be in trouble anyway, and Stella would stay how she was.

No. With the one-word thought I stood up and surveyed the room. I could not, would not, leave it like this. Stopping now would mean that the Humanists had won even though we’d fought back, and that would mean that I was defenseless. Not in the same way as Mateo and the volunteers cleaning the beach, but still. I refused to live in a world where that was true. I had to do something, to take action.

What do I have that I can use?
I approached the toolbox at the center of the robot and opened it.
I have everything. 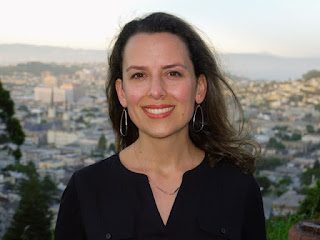 Ateret Haselkorn writes fiction and poetry. She is the winner of 2014 Annual Palo Alto Weekly Short Story Contest. Her children’s story was published as a finalist in the 2020 “Science Me a Story” contest of the Society of Spanish Researchers in the United Kingdom. Her work has been published in multiple literary and medical journals.