The Wonders of the Peculiar Parasol by Mark M.Even

This post is part of a virtual book tour organized by Goddess Fish Promotions. Mark M. Even will be awarding a $20 Amazon/BN GC to a randomly drawn winner via rafflecopter during the tour. Click on the tour banner to see the other stops on the tour.

My favorite books were comic books! While the nuns at my grade school looked down on me reading these and forced me to pick other books from the annual “book fair”, it was the comic books that stuck with me. When I was younger, my favorite was the DC comic called The Legion of Super-Heroes. This comic was set far in the future and “humans” from all over the galaxy would try to get accepted into the Legion to protect the galaxy from evil and disasters. The Legion was made up of “teens” – Superboy was one of them (but he only occasionally appeared because he had to go to the future to be with them). Each member had a unique power, mostly because of their alien DNA. Each comic was a self-contained story.

As I got older, I graduated to the Marvel comics –where the story/plot ran across many issues (sometimes as many as 10 or 12). The epic stories even from the 1970s are now often combined into a “graphic novel” available today, allowing the reader to read the entire story within one book. My favorites included The Avengers, the X-Men, and The Defenders.

All of these issues are “team” oriented, portraying both the challenges of people having to work together as well as their successes. And with the Marvel storytelling, often their failures as well. And this is what I liked the most --- a recounting of teamwork and personalities in both a visual and story-telling format.

As you can see from above, super-powered beings are one of my favorite topics. Flight, super-strength, invulnerability, invisibility, magic, etc. Why would anyone pick just ONE of these? My first inclination would be to pick invisibility – to be the “fly on the wall” and able to see or hear things that one would never get to see or hear because you would either be kept out of the room or those things wouldn’t happen if you were there. BUT – if I had to pick, I would pick flight! To be able to fly through the air with the freedom of going anywhere with no barriers would be so awesome.

Staying with the super-hero theme, The Adventures of Superman and Batman would be tied for 2nd. But my all-time favorite would be Star Trek. And I’ve also enjoyed all of the Star Trek franchise throughout the years, including the current show called Star Trek: Discovery.

An African Safari. My wife and I (along with 2 other couples we know) actually did this about 8 years ago. Best trip I’ve ever had and one I hope to do again. To see the expanses of African with all of the unique and beautiful wildlife is amazing. To hear a herd of cape buffalo snorting just outside your tent is exhilarating. To watch a group of lions hunt and kill a warthog is once in a lifetime!

I’d first pay off all of my kids’ house mortgages. Then I’d take my kids, their spouses, and my grandchildren on a worldwide trip, including an African safari. Anything left after that, since I can’t save it, I’d give to charity.

I’ll assume this question refers to a celebrity or fantasy, so I won’t answer my wife (who was my high school sweetheart). Sophia Loren. And, even though she is currently 85, she is still absolutely gorgeous! 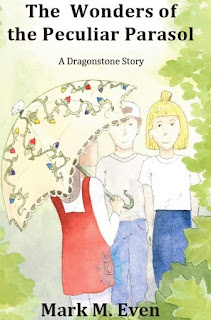 The Wonders of the Peculiar Parasol is an outstanding fantasy that shows how Mandy discovers her magic under strange circumstances. It focuses on how Mandy will get home and how she'll discover her real purpose in coming to this land, providing the basics of how this new world operates in a manner that elementary-level readers can readily understand: "The parasol and the dragonstone work together to sense the presence, or lack of presence, of the inner magic of the person holding the parasol. The dragonstone uses the infinite power of the sun to tap or channel or access that magic. And one way it does that is to transport an individual to Storyworld.”

As Mandy harbors a secret, puzzles out how to use the dragonstone, and interacts with her family while battling lizards and building an army, young readers will relish the blend of real-world family dilemmas and fantasy world encounters. (D. Donovan, Midwest Book Review)

Mickey smiled at everyone and said, “OK! Here we go!” and started twirling the parasol. Instantly the dragonstone flashed a bright purple light, and Mickey was frozen still—with a big grin on his face.

After about ten minutes, during which time the parents, as they always did, checked their watches about a hundred times, Mickey popped back to life and said, “Neato!”

Everyone else applauded and clamored for his story. Not one to easily cede being the center of attention, Mickey entertained everyone with a story of being a high-performance race car driver in a sort of “Olympics of Racing.”

“It was amazing!” he said. “I got to be in several different races in one day. One event was drag racing. And I got to drive a big purple car with extra-large black rear tires, a tiny steering wheel, a jet engine—and a parachute to stop the car at the end of each race. Totally cool!

“Then I was also in an Indy-style race of one hundred laps around a huge red brick track. Then I did an off-road endurance race in a cool purple dune buggy with oversize tires with ‘MICKEY’ in white letters six inches high on each tire. I won two of three races with my buggy!” He rolled his eyes and continued, “I only lost once to a yellow dune buggy in the cool endurance race event. And you know what? That yellow dune buggy was driven by a girl I thought I knew. She was wearing a red and yellow jacket and a silver helmet with blue and green lightning symbols on it. She looked so… familiar!”

About the Author:I retired from almost 40 years working for IBM in Mar, 2017. I’ve been married for 43 years to my wife, Joyce and have 3 children and 8 grand-children. I enjoy golfing, fishing, bird-watching and travel.

Shortly after retiring from IBM in 2017, I was at a small-town celebration in northern Wisconsin and noticed that a number of the little vendor booths were people selling children’s books that they created and self-published. I looked at these and told myself that I could write something like that. And I did, but these were the type of books that were targeted at small kids and needed vibrant pictures and artwork.

In the spring of 2018, I was visiting my niece and her family, and she told me of this wonderful idea for a story for a children’s book and after talking with her about it, we agreed to collaborate and I took on the task of writing the story. After many iterations, The Wonders of the Peculiar Parasol became a reality.