Rip to the Rescue by Miriam Halahmy

This post is part of a virtual book tour organized by Goddess Fish Promotions. The author will be awarding a print copy of the book to three randomly drawn winners (US only). Click on the tour banner to see the other stops on the tour. 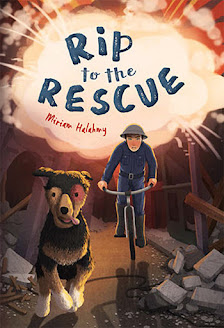 It's 1940 and Nazi bombs are raining down on London, but 13-year-old bike messenger Jack has just discovered something unbelievable: a stray dog with a surprising talent.

Jack navigates the smoky, ash-covered streets of London amid air raid sirens and falling bombs, dodging shrapnel and listening for cries for help, as a bike messenger for fire crews. When Jack finds a dog, miraculously still alive after the latest Nazi bombing of London, he realizes there's something extra special about the shaggy pup--he can smell people who are trapped under debris.

With his new canine companion, nicknamed Rip because of the dog's torn ear, maybe Jack can do more than just relay messages back-and-forth--he can actually save lives. And if Jack's friend Paula is right about the impending Nazi invasion, he and Rip will need to do all they can to help Jewish families like hers.

There's just one problem: Jack has to convince his ill-tempered father to let him keep Rip.

Based on true episodes during the London Blitz in World War II, this action-packed and touching story explores the beginnings of search-and-rescue dogs and the bravery and resourcefulness of young people determined to do their part for their country.

“It’s down to you now, Jack,” said Warden Yates, scribbling on a report form. “The line’s gone dead to the fire station. Get to Skinner Street soon as you can.”

Jack and the warden both ducked as a cluster of incendiary bombs exploded across nearby rooftops. Jack could hear shrapnel jingling down the slates like a tune he could almost whistle.

“Close,” he muttered, stuffing the message into the pocket of his blue overalls. Then he tightened the strap under his helmet and mounted his bike.

“Keep your head down!” cried the warden as Jack rode off, swerving to avoid the bomb crater at the top of the road. There was a shop on fire up ahead, lighting up the road in the blackout. Jack raced past as fast as he could, hoping sparks wouldn’t set fi re to his clothes. That’s what happened to Tommy Shepherd last week, and he was still in hospital with serious burns. Tommy was fifteen, almost two years older than Jack. They’d both lied about their ages to get into the messengers.

You were supposed to be seventeen.

“What an adventure,” Tommy had murmured to him as they stood in line at the Town Hall two months earlier. Jack was a full head taller than Tommy and the wardens accepted them both into training without a murmur back in July. Now it was the end of September and London had been bombed every night since the seventh.

Even if they found out I was only thirteen, they wouldn’t chuck me out, Jack told himself, freewheeling past a pile of rubble. Especially since Tommy got hit.

The thought spurred him on, dreams of making heroic rescues in burning buildings chasing him down the street.

Miriam Halahmy is a poet, special needs educator, and novelist. She has worked with refugees in schools as well as in workshops she led for PEN and the Medical Foundation for the Victims of Torture. Her books include Behind Closed Doors and Hidden, which was nominated for the Carnegie Medal.