Into the Shadow by T.D. Shields

This post is part of a virtual book tour organized by Goddess Fish Promotions. The author will be awarding the first book (ebook) in three YA series: Into Shadow by TD Shields; Awaken by Michelle Bryan; and The Other Inheritance by Rebecca Jaycox to a randomly drawn winner via rafflecopter during the tour. Click on the tour banner to see the other stops on the tour.

She’s nineteen. The President’s daughter. They want her dead.

Poppy’s father may be the President of the North American Alliance, but that just makes her a target for those wishing to topple the regime.

Barely escaping with her life, she must travel across a country ravaged by war and climate change to seek safety amongst a people who only recently opposed her. There she must use every skill learned from her military upbringing to survive terrifying beasts, deadly plant life, and lawless gangs before finally finding a group willing to accept her.

But her peace soon proves to be illusory. It’s not only the government that wants her dead now.

The hallway was mostly empty with a bench or two placed along the walls. Open doors lined both sides of the wall, gaping pools of deeper dark opening off the main path. I tried looking inside a couple of classrooms, but it was too dark to make out anything.

At the end of the hallway something caught my eye—a tiny gleam of pale color against the wall where it should have been dark. I turned my steps to investigate and crouched down to look closer. It took me a minute to realize what I was looking at and when realization came, I shoved my hand hard against my mouth to hold back a whimper. The white gleam came from bones piled in a jumbled heap against the wall. Judging by the empty skull peering from the mound, the bones were human.

Even worse, behind the first heap of bones was another. And another. I wasn’t sure how many there might be continuing back through that hallway. I wasn’t going to find out either. Investigating this was not a job for one guard on her first patrol. I stumbled to my feet so I could turn and run for the exit. Suddenly, I heard a noise behind me. Not much, just a whisper of sound like a sliding footstep against the tiled floor. I whirled, trying to locate the source of the noise, but I could see nothing.

“Marcii?” I called. I admit it, my voice shook a little. Silence answered me. “Hello?” I called again. 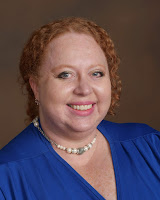 After writing stories in her head for the last 30+ years, Tara finally decided to take a stab at writing them down to share them with others.

Tara has a husband, 4 kids, and 5 cats to care for along with a full-time job and contract work on the side, so finding time to write is the biggest challenge. Since her most productive hours are from 12-5 a.m. anyway, Tara usually gives up sleep in favor of writing.