This post is part of a virtual book tour organized by Goddess Fish Promotions. Deanna Roy will be awarding a $20 Amazon/BN GC to a randomly drawn winner via rafflecopter during the tour. Click on the tour banner to see the other stops on the tour.

Elektra never wanted to be the good guy.

She’s a troublemaker and a clever Loki magic thief. Nobody gets in her way. All she has to do is zap people with her electric-magnetic power, and they forget where they are or what they are doing.

But a few days ago in the desert, a magnetic sandstorm did more than blow everyone backward. It switched the polarity of the magic world. The good guys turned bad. And the bad guys like Elektra, well, now their magic only works if they are doing good in the world.

Now the Vor are out to steal more power, making the thieves look like chumps. Elektra will have to fight every bad guy code she’s ever stood for to take down the good guys and save the day.

Elektra Chaos is the final book in the Magic Mayhem trilogy.

The Loki stopped for hamburgers a few hours from the mountains. Elektra went into the bathroom, pausing to turn the faucets without touching them. She found she could press the metal button on the drying machine by simply pushing the air in front of it. So her magnet power could either attract or repel, the same way magnets did if you turned them around. Cool.

She turned to the stall doors on their silver hinges. The magnetism didn’t affect the doors themselves, as they weren’t metal. Elektra tried to make the hinges move on their own, but she didn’t know how to apply the force. She tried and tried to open them, but they wouldn’t budge.

If she couldn’t do anything bigger than a thumbtack or a faucet, how would she change the polarity of the magical world?

She got frustrated then, ready to scream at the silly metal, when she was struck by a thousand tiny needlelike pains in her legs.

All the nails and screws in the room were sticking to her.

She backed away as half the room collapsed. Without their metal pins and hinges, the stalls fell over, knocking into walls. Elektra pressed against the wood door, then stumbled as it also fell outward with no hardware to hold it in place. The sound was crazy loud as planks fell over and crashed to the floor.

Now she knew to be careful. 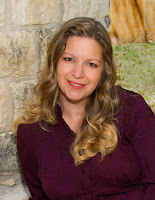 Deanna Roy is the six-time USA Today bestselling author of middle grade books, women's fiction, and college romance. She wrote Elektra Chaos for her daughter Elizabeth, who was diagnosed with epilepsy at age six.

Buy the book at Amazon, iBooks, Kobo, or Barnes and Noble.