School of Deaths by Christopher Mannino

This review is part of a virtual book tour organized by Goddess Fish Promotions. Christopher Mannino will be awarding a $20 Amazon/BN GC to a randomly drawn winner via rafflecopter during the tour. Click on the tour banner to see the other reviews.

Thrust into a world of men, can a timid girl find bravery as the first female Death?

Thirteen-year-old Suzie Sarnio always believed the Grim Reaper was a fairy tale image of a skeleton with a scythe. Now, forced to enter the College of Deaths, she finds herself training to bring souls from the Living World to the Hereafter. The task is demanding enough, but as the only female in the all-male College, she quickly becomes a target. Attacked by both classmates and strangers, Suzie is alone in a world where even her teachers want her to fail.

Scythes hungry for souls, Deaths who enslave a race of mysterious magicians, and echoes of an ancient war with Dragons.

As her year progresses, Suzie suspects her presence isn't an accident. She uncovers a plot to overthrow the World of Deaths. Now she must also discover the reason she's been brought there: the first female Death in a million years.

When Suzie finds herself suddenly snatched from her life to enroll in a School of Deaths, she's a bit out of her league. But the bullying and schooling she encounters forces her to draw deep within herself and find a strength she didn't know she possesses.

This is a good book for the middle age crowd. I think the girls can identify with Suzie and will be able to really empathize with some of the experiences she has.

My only complaint is that the book had more of a telling feel to it--it was like watching a TV show. I would have liked to have been drawn in a bit more into the characters. But, the book is well written and the story line itself is very interesting.

There are a few similarities with another popular kids book that shall not be named, but the plot itself is different enough that the book does not feel derivative. I am glad there's going to be a sequel--I look forward to seeing what new adventures are in store for Suzie and her friends.

You ready?” asked Billy. He wore a mask over his face, showing only his eyes. He had insisted on covering his face to help the soul feel at ease. If they were transporters, they didn’t want to frighten their passenger.

“You can do this,” said Frank. His calm manner reassured her. He looked at her with his deep brown eyes and freckled face. She nodded and straightened the sleeves of her black robe.

She walked to Hann who stood in the center of the class. He handed her a long scythe, even taller than she was. It was light in her hand; the handle danced with energy. The blade slid through the air like sunlight through water. Life flowed down from the blade, coursing through the handle, sending tingles into her arm. Sweat beaded in her palms and trickled from her forehead.

“Let the scythe do the work,” reminded Hann, “and you’ll be fine.”

She nodded and walked back to her group. She tied herself to Frank and Billy using a tether. Then she held the scythe in her hands and paused.

This was ridiculous. She was a thirteen-year-old girl, a kid from Maryland, holding a scythe. Not some costume piece, but an actual, working scythe. Now she, Suzie, was supposed to Reap a soul. Even her mysteries with Sindril and the Dragon Key suddenly seemed trivial.

She adjusted her grip and adjusted again. The tingles in the scythe grew stronger, itching her hands and arms. It’s ready. It wants to swing; to do its job. She moved her hands a third time and Frank glanced at Billy. Billy adjusted his mask.

“What’s the matter,” taunted Luc behind her. “Is the little girl scared?”

She clutched the handle and let the blade fall. She hardly moved, but the blade shot downward, slicing air, light, heat, even thought. For an instant, her arm was on fire and the world vanished into darkness.

The smell of strawberries exploded around her as color, form, and details blurred into a single, unending stream of confusion. She heard the sound of screams in the distance, and tears. The scythe pulled her down, down, down between the worlds. She slipped past the twin suns of the In-Between and watched the Mortal World approaching. On the edge of her vision, she glimpsed two bright pools of green fire.

“You grow stronger every day,” said the eyes. “But the greatest challenge is yet to come.”

She tried to turn, but the scythe pulled her onward. She coursed through stars and space, beyond time and emotion. Lighter than a daydream, she slipped through a crevice: the gap between light and shadow. The blade twisted, finding its way.

A face appeared before her: an elderly man she didn’t recognize. Somehow, she sensed a name: Elias Stoneridge.

She landed hard, stumbling as her feet hit a tiled floor. Beads of white light trickled off the blade.

For a moment, she couldn’t tell where she was. She heard beeps and the slow intake of air.

Frank patted her on the shoulder. “You okay?” he asked.

“Remember, don’t let anyone else see us,” said Frank, looking around the hospital room. Certified Deaths received special robes to help avoid mortal eyes. Ironically, the Deaths who’d inspired tales of the Grim Reaper throughout the ages had been students like her. Students and ones who didn’t make it back. She shuddered, remembering her skeletal appearance. It seemed long ago.

A man lay in a bed, connected to an array of tubes and machines. Suzie walked to the foot of his bed and read the name on his chart. “Elias Stoneridge.” The scythe quivered in her hand. The handle pulsed like a beating heart, or was that only her own heartbeat? No, the blade felt the soul, it was hungry.

“It’s his time,” said Frank, patting her on the shoulder. “Quickly, before someone comes.”

Elias’s eyes stared at her, but he seemed to look through her. He gasped for air and the machines behind the bed beeped.

“A nurse is coming,” said Billy, glancing into the hallway. “She’s only a few doors down.”

Suzie didn’t have time to think, but in a way, she didn’t have to. She didn’t even swing; she relaxed her muscles and stopped fighting the scythe. The blade leapt downward, straight through Elias Stoneridge. As it struck the weak stranger, she felt a strange sensation as the blade swam through the soul. For an instant, she swore she heard chewing, not from Elias, but from the blade itself. The scythe continued down through the floor, before swinging around. It pulled on her, jerking her into a stumble.

Elias sat up, his eyes wide with fear. His body lay on the bed and the machine let out a long, droll beep. 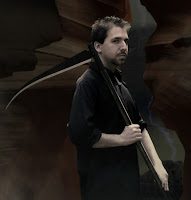 Christopher Mannino’s life is best described as an unending creative outlet. He teaches high school theatre in Greenbelt, Maryland. In addition to his daily drama classes, he runs several after-school performance and production drama groups. He spends his summers writing and singing. Mannino holds a Master of Arts in Theatre Education from Catholic University, and has studied mythology and literature both in America and at Oxford University. His work with young people helped inspire him to write young adult fantasy, although it was his love of reading that truly brought his writing to life. His wife, Rachel Mannino, is a romance author at www.RachelMannino.com

Mannino is currently completing The Scythe Wielder's Secret series and is working on several adult novels.