This post is part of a virtual book tour organized by Goddess Fish Promotions. Jennifer will be awarding a Grand Prize of a $50 Amazon GC to a randomly drawn winner via rafflecopter during the tour, and a Mobi or paperback (paperback US ONLY) copy of Altera Realm: Discovery to a randomly drawn winner at every stop during the tour. Click on the tour banner to see the other stops on the tour. 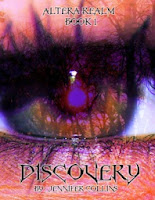 Syney Andrews has secrets—she just doesn’t know she has them. She spent the last eighteen years in the human realm with her adoptive parents unaware of her real powers and role in Altera Realm.
,br> Altera Realm has been at war for well over a century and is connected to the Human Realm by a portal and no human knows it exists. It is home to the five old and great races—Magic Users, Lycins, Vampires, Daemons, and Shifters. Each race is an entity of their own with its own life purpose, rulers and guarded secrets.

Syney is the prophesized “chosen one”, the one destined to end the over hundred-year war and become queen of the Magic Users. Not that Syney wants to rule or even knows anything about Altera. Falling in love with her Lycin Protector, a crime punishable by death, only serves to make matters worse and Syney’s new life more complicated.

This reviewer loves books about portals to another world and was one reason I chose to review this book. Add into that a world populated by some of my favorite paranormal creatures and I was in heaven. And, thank goodness, this book didn't let me down.

Syney made me laugh at times...you can definitely tell this is a character who is part of the post-Buffy generation. A guy turning to wolf? She doesn't take long to accept the reality of the whole situation.

Syney runs into a lot of problems once she is brought back to the Altera Realm...not everyone is happy with the potential change, which sets up the scene for a lot of controversy and intrigue. I could so see this as a movie.. or even a TV series (are you listening, Hollywood?)

4 stars for a book that will keep you wondering what is happening next (ps: not to give any spoilers away, but Ms. Collins--you will fix that situation with Hunter, right??)

Hunter looked back up at her and gave her a curt nod. “We need to go. The more time we spend in this Realm, the more dangerous it gets for us.”

Syney nodded and got up from the bed. She looked at Gabriel. “Thank you, for what you did.”

Syney blinked at him, not understanding.

“I can kill him,” Hunter said quietly behind Syney, causing her to almost laugh from the absurdity of the comment.

“What do you want?” she asked.

“To go with you,” Gabriel said matter-of-factly.

Gabriel eyed her for a moment before cocking his head to the side. “Not all Vampires are fans of the Great War. We all are, however, very opportunistic.” He paused. “I want to be there, to see the new reign. And get in on the ground floor.”

Syney smiled. She liked this Vampire. He was honest, something she hadn’t gotten a lot of in the last couple of days. “Deal.”

Hunter spun to stand in front of Syney and glared at her. “No deal. Vampires aren’t to be trusted. They’re hired killers who care only for themselves. They aren’t allowed in the Village and for good reason. Their blood may have healing properties, but they also need blood to survive, and where do you think they get that from?”

Syney was taken aback by Hunter’s forcefulness. This was another side of him, one she only had seen when he was the wolf and fighting. “He saved my life.”

“Because he wanted something.”

“He saved my life,” she repeated.

“And now he’s charging you for it,” Hunter said.

Syney placed her hand on his chest. “Listen to me. He didn’t hesitate to save me. He even tried before she attacked me. He’s been nothing but honest with us. It was my life he saved, and I want to repay him. If this is what he wants, than then this is what I can do.”

“And what if you’re leading a lion into a sheep’s den?”

Syney smiled. “When he starts eating the sheep, you can do what you like with him.” She looked around Hunter’s large frame to Gabriel. “You OK with that?”

Gabriel gave her a sly smile. “I will put up no fight to him.”

Syney looked back at Hunter. “You OK with that?”

After a moment Hunter nodded reluctantly. 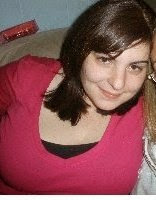 Jennifer Collins holds a BA in English with concentration in Creative Writing from Montclair State University and completed a certification program at Kean University for teacher of English K-12 in New Jersey. She enjoys being a high school English teacher at the Plainfield Academy of Arts and Advanced Studies, a public performing arts middle school and high school in the urban inner-city school district of Plainfield, New Jersey.

For more information on the Altera Realm Series visit Jennifercollinsbooks.com

Buy the book at Amazon a Rafflecopter giveaway
Posted by Books in the Hall at 4:00 AM