This review is part of a virtual book tour organized by Goddess Fish Promotions. Emily will be awarding a $20 Amazon GC to a randomly drawn commenter during the tour. Click on the tour banner to see the other stops on the tour.

When her mom abandoned the family, Evelyn Crayley was left with an alcoholic father, a drug-dealing older brother and the nickname "Evil." Starting fights at school and getting high do little to ebb the rage welling inside. Her brother, Jim, does his best to protect her from their violent father, but Evil still feels helpless, doomed to live the same kind of white trash life she and her family have always known.

That summer everything changes: her father's abuse spurs Evil to run away from home, and her budding romance with Jim's best friend, Dopey, damages her relationship with the brother she depended on. When she is forced to return home again, will Evil's secrets destroy her? Or will she finally learn that the girl in the mirror can take control of her future?

This is not your typical "feel good" YA book. It's hard, it's gritty, and unfortunately I feel it may be true to life.

The book starts out with a prologue that sets the background for the book. Then, the main part of the story is told in alternating points of view (1st person but there's never a question who is talking) from Jim, Evil, and Dopey. It takes place over a few short weeks early summer when their three lives are changed forever and secrets hidden are revealed.

The characters are well-drawn and real. The reader feels the pain Evil lives and rejoices when she finds the strength within her to fight back. The frustration that Jim feels is also evident as he tries to protect her in the best way he knows how. Unfortunately, because of the only role model he has, that way might not be the best. And, my favorite character is Dopey-- he's a deeply caring young man who only wants the best for Evil and it's his love that helps her climb out and escape the mirror.

Be prepared for cursing, drug use, abuse and a pretty dysfunctional home. I know it made me appreciate my own. 4 stars.

We turn onto our street, roll to a stop outside the house. It looks so small and dark and lonely, and I don’t want to go inside. I want to run away. But before I can even think about jumping out of the car, Dad grabs my wrist, slams the car into park with his left hand, opens the door, and yanks me across the seat. I grab onto the door handle, panicking.

“Get out of the car!” Dad yanks me harder. Then, when he sees that ain’t going to work, he grabs me with his left hand and uses his right to punch the side of my head.

“Get your ass out of this car!” He punches me again, then lets out this hellacious roar and jumps back in. He starts beating the shit out of me; gets my eyes, the back of my head, my chest, my arms. There’s sweat and blood and grunts and I feel like I’m an animal; I’m on my hands and knees on the ground, snorting. The air’s kicked right out of me and I’m curled in on myself, shrinking, trying to get some air in my lungs. It’s like those dreams where you open your mouth to scream but nothing comes out—only in reverse. I can’t get nothing in. I’m being kicked, then grabbed, then dragged, but all of that’s far away. The only thing I can think about is air.

Dad leans in close; his face is red and he’s hollering at me to get up. Then everything fades away. 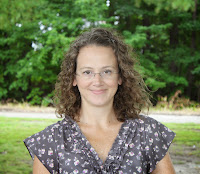 Emily P. DeLoach was born and raised in southern Virginia. After graduating from Ferrum College with a Bachelor's degree in psychology (with a minor in English), she went on to work in a variety of jobs, from boardwalk train driver in Ocean City, Maryland, to a missionary in the Russian Far East, before becoming a teacher on the Eastern Shore of Virginia. She is currently a stay-at-home mother living in Hampton Roads.

Emily has been writing for most of her life, and has had the characters from her first novel, Escaping the Mirror, stuck in her head since she was fifteen. She loves character-driven stories and writes to give her own characters a voice.

She is currently working on her second novel.

Visit her on Facebook and buy the book at Amazon.
Posted by Books in the Hall at 5:16 AM