REVIEW: What's It To You by Judy Irwin 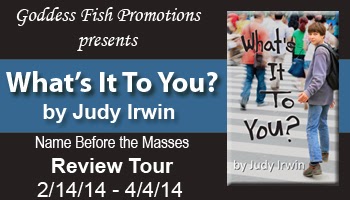 This review is posted as part of a virtual book tour organized by Goddess Fish Promotions. Judy will be awarding a $25 Amazon GC to a randomly drawn commenter during the tour. Click on the tour banner to see the other stops on the tour.

NOTE: As part of the launch of this book, the first two books in this loosely-linked series by Judy Irwin are available for free on Smashwords, in all e-book formats, until March 14/14. Use these codes for your free download:

What's It To You by Judy Irwin
Contemporary, Middle Grade
106 pages
3.5 stars

What if nothing was the worst thing you could do? For 13-year old Tim Stockdale, it's all about keeping his head down and fitting in with the friends he's managed to make at his new school. His older brother, Eli, is the opposite. He's trying to set up a Gay-Straight Alliance at his high school, where he's a junior. Even though the school board is against it, Eli’s not afraid of what the fallout might be.

So when Tim's new friends start to bully a kid they think is gay, Tim's torn - he doesn't want to do anything to risk being cast out of the crew. But when Eli is hurt in a protest, Tim's own failure to do anything starts to get under his skin. Will he find his way at his new middle school, and figure out what's really worth standing up for?

MY REVIEW: This book is a look at how easy it is for a good kid to be led astray and also shows how other kids can be strong and stand up for what's right.

Tim's a good kid, he really is, but when he starts a new school, he falls in with the wrong crowd -- the bullies, one of whom has a self-described anger problem.  They pick on everyone, but especially the kid they think is gay.  And then they ask Tim if his brother, Eli, is gay, too ... something that never really occurred to Tim. Eli is just Eli and that's all that mattered, up until Eli tries to start a Gay-Straight Alliance.

This book reads a little like "a moment in time". Yes there's a start and a finish of sorts, but it almost seemed like it should be part of a larger work.  It moved quickly, and was at times just a little too brief as time sped by.  I would have liked to get to know the secondary characters better, especially the ones who made a real impact on Tim as he slowly realized that HE was one of the bullies and tried to make things right.

Still, this book has plenty of merit.  It teaches strength and shows how it's good and right to stand up when you see something wrong.  It (hopefully) will help kids see how choices they make, especially those involving the people you let into your life, matter a lot.  They help form the person you will become and you have to decide, as Tim did, what kind of person you want to be.

All-in-all a worthwhile read, and certainly appropriate for the time.  Due to the discussion of homosexuality, though, I would recommend it for slightly older kids in the middle grade reading group, perhaps 10+.

Tim turns toward the voice. All the other kids turn too. Em stands at the edge of one of the bigger groups. "Hey, new guy. You have to join a group."

"Look around. Don't you get it? We're all arranged by size. Pick the group that's your size," says Em. "In your case, look for the short people."

Tim looks around. "Really?" The groups don't seem to be organized by size, he thinks. There are kids of all sizes in each of them.

The girls standing near Em start to giggle.

"Em, you're such a troublemaker," says the tall girl, with frizzy hair and glasses. She's standing in a different group.

"What do you mean? You're in the tall group, just like I said. But wait - aren't you really supposed to be in the frizzy-haired group?" The group of girls around Em laughs.

"Really? Then shouldn't you be in the think-you're-funny-but-you're not group? Or how about the dumb- "

"Good afternoon, children," calls a deep voice, and a man comes through the doors into the gym. "Enough with the repartee. I see you're already organized by home rooms, fantastic." The teacher has curly brown hair, and glasses. He walks toward Tim. "Except for this young man here. Sir, what is your name, and why are you not in the proper group?"

Author Judy Irwin's books are about kids dealing with everyday stuff, like parents and divorce, friendships and bullies, and figuring out how to handle different situations and circumstances. She lives in Toronto with a dog, a cat, and a hamster, plus her husband and two children, ages 11 and 14. Judy always wanted to be a writer, and wrote her first book in fourth grade. It was about a boy named Japan, who lived in Japan. She studied English Literature at the University of Toronto, and some of her favorite authors are Judy Blume, Laurie Halse Anderson, Beverly Cleary, Edward Eager and Andrew Clements, and especially F. Scott Fitzgerald.

'What Did You Say?', Judy's first book, is about 12-year-old Tash. The book takes place at a trailer park up north. 'We're Done', Judy's second book, takes place in a middle school. It's about Luke, who first appears in 'What Did You Say?' Tash and Jon, from the first book, are also characters in this one. In 'What's It To You?', Judy's third book, 13-year-old Tim Stockdale (who first appeared as Luke's classmate in 'We're Done'), is figuring out where he fits in at Carlyle.

For Judy, the middle school years are especially interesting since they can be some of the most challenging for kids. It's a time when kids are faced with new issues, and bigger problems, than many have experienced before. As they figure out how they feel, and decide how to respond, they're also figuring out who they are, and shaping the nature of the person they will grow into.