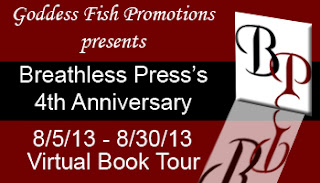 This post is part of a virtual book tour organized by Goddess Fish Promotions. Breathless Press will be giving away the following prizes to randomly drawn commenters during the tour:

The Rafflecopter to enter the contest is at the end of this post.

As part of the anniversary celebration, Ari Harper stopped by.

Why YA fiction? What draws you to it?
The chance to relive my childhood is one reason, I never wanted to grow up. The other is the freedom I get as a writer to explore a different genre.

Coal or candy in your Christmas stocking? Why?
Candy for sure and chocolate. I have a bit of a sweet tooth I have to admit.

What superpower would you love to have? Why?
I wish I could fly. How cool would that be seriously? No more traffic jams, lining up for a bus or taxi. And I could go where ever I wanted when I wanted.

What book is on your nightstand currently?
The Vincent Boys, Abbi Glines and it's really good.

Sum up your book for Twitter: 140 characters or less.
Life as a witch charged with saving your family with a sexy god for backup. What could possibly go wrong?

Favorite hot beverage. Why?
Tea, weak and black. I can drink it anywhere, anytime and its easy.

Which of your characters would you most like to meet IRL? Why?
Jasper. I love his voice, that lilting irish brogue that rolls over my mind is magnetic. He is one of the kindest men I know and did I say how handsome he was? Or mention what his voice does to me? Oh I did, um sorry.

Playlist for your current book.
Pink, The Truth About Love.

Favorite class in high school. Why?
English. My teacher used to make us write on the spot and really pushed us. That lesson has helped me out so much.

Nera is a normal teenage girl living in Ireland, or so she thought until she discovers the family secret.. now her world is forever changed.

Descended from a long line of witches, she discovers is the one who has to stop the curse that has taken the life of every girl before her.

And if that isn't enough, she must learn to use magic from the man called Bones. He is the son of Mari, Queen of the Witches...and a god. It is Bones who has been entrusted to teach her the skills she needs to stay alive, which wouldn't be so bad if he didn't have an uncanny knack for pushing her buttons.

Can Nera succeed and resist the charms of the man who gets under her skin at every opportunity?

About the Author: Ari Harper never wanted to grow up.

To offset the limitations of aging ungracefully, she created her own set of unique worlds where she can be and do whatever she wants.

Gods, witches and demons surround Ari while she spins her magic, doing mainly what they tell her to do. Given a chance, she prefers to work amongst chaos, which is good because she is constantly surrounded by children, all clamoring for attention. Some of them end up in her stories, some of them even get to die grisly deaths or be cast away to another realm.

Her favorite pet is a big black dog called Hugo. You will find him as himself in the Curse of Kin series as Nera's faithful hound.