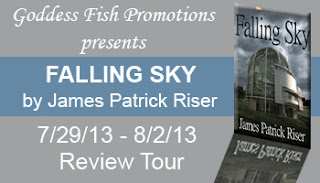 This post is part of a review tour organized by Goddess Fish Promotions for James Patrick Riser's YA SF book Falling Sky. James will be awarding a $10 GC to Wild Child Publishing to a randomly drawn commenter during the tour. Click on the tour banner to see the other stops on the tour.

Following a devastating world war, the surface of the planet has been covered in a substance called Dust, a weapon that can break down the physical make up of entire cities, reducing them to rubble and preventing citizens from rebuilding their lost metropolises for several years. In order to survive, humanity has taken refuge in crowded, underground cities.

Ian Blum is a 15 year old boy living in one such city. His crippling social anxiety confines him to a solitary life at home, while his parents are away at their jobs. The person he interacts with the most is his home school professor, Michael Wasley. One night, Ian is visited by a mysterious figure in a dream. The man warns Ian of a great earthquake that will destroy the cities, killing all of the inhabitants. The man charges Ian with the task of getting everyone out.

Soon after, Ian finds out that he isn't the only one who has had this dream and reluctantly joins a group of rebels who has made it their mission to drive everyone from the cities for their own safety, however, no one believes in the stranger's prophecy. Ian and the rebels must find a way to get the people to safety at any cost.

There's a lot of punch in this short novel from James Patrick Riser. It's just twenty years in the future.. but a lot has changed. The entire population of earth has had to move underground. Most people have adapted, but not Ian Blum. Even though he was born underground,he can't stand being around groups of people--leaving him with only one person he can talk to once he starts having odd dreams.

That person turns out to be the one person who can really help him--and Ian is off on the adventure of his life.

With only around 70 pages, there's not a lot of room for character development and, if I had a complaint, that would be my only one. I would have liked to have gotten to know the characters better. That being said, I really liked Ian and Michael, and I hope the author is planning a sequel to this book. There are a few questions left unanswered at the end of Falling Sky that I hope were on purpose.

He dreamed of being in a box barely large enough to accommodate him. He scratched at the walls in hopes of liberating himself from the oppressive darkness, but couldn’t. After what seemed like hours, a deep rumbling shook the ground underneath him. The vibrations grew more powerful by the moment and light began to pour in through numerous spider web cracks that quickly spread over the surface of his prison. Eventually, the powerful disturbance reached a peak and Ian found himself with his hands braced against the quickly crumbling walls as they gave way with a violent burst. The explosion left him in field of wild grass. Not like the even, neatly trimmed grass he found in the city’s parks, usually full of children chasing each other during simple games with made up rules. This grass was tall and uneven. Each blade swayed in unison as they were blown this way and that by a sharp, biting wind. He knew that this could only be the surface, even though he’d never been there himself. There was no wind underground, for a sophisticated temperature regulation system mimicked the weather of a warm spring day.

Sometimes, Ian lay in the uniform grass and stared at the clouds to see if he could spot any gaps in the illusion; many times he did. A pitch black ceiling would quickly reveal itself before being replaced by a deep, picturesque blue sky. 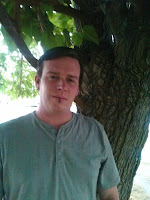 James Patrick Riser is the author of Syndrome and Falling Sky, two novellas published by Wild Child Publishing. His short fiction has appeared in the, now defunct, online horror fiction magazine, Necrotic Tissue, and his poetry has appeared in the online poetry journals, Pif magazine, Dead Beats and Four and Twenty Poetry. He lives in Colton, California.

Connect with James on his website and Twitter. His publisher is Wild Child Publishing and Falling Sky can be bought at Amazon.