The Exemeus by Folami and Abeni Morris -- Review Tour and Giveaway 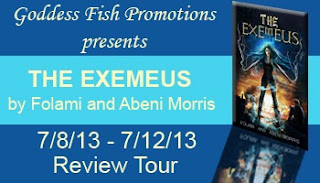 This review is posted in conjunction with the author's tour with Goddess Fish Promotions. The authors will award a $30 Amazon gift card to one randomly drawn commenter at the end of the tour. Click the tour banner to see the other stops on the tour.

Hyalee Smith is dead, she just doesn’t know it yet.

Her short life was devoted to love and to hate. Love of the man who stole her heart, hate for the man who stole the world. Murdered by the government she swore to destroy, she has been given another chance to make it right. But to save the planet, she needs the help of the most powerful mystic the world has ever seen—unfortunately he hasn’t been born yet.

In a world where fear is the only currency, Dephon has committed the ultimate crime:inspiring hope.

His only goal is to make it safely through ninth grade, but on a post-apocalyptic Earth run by the Treptonian government, it isn’t that simple. Heir to a legendary power, Dephon Johnson is the only threat to the government’s rule. And on Trepton, all threats must be eliminated. When hundreds of assassins are dispatched to neutralize him, Dephon is forced to fight back. His only chance of survival is to enlist the aid of the greatest warrior the world has ever known. The only problem is, she's been dead for 13 years.

One word for this book---WOW! These authors have brought to life a magical world--unfortunately, it's a future world of our own making. And, it's a story within a story....

Dephon is a 9th grader who is the object of every bully's "jokes"....he's especially targetted and tormented by the football team. His father doesn't seem to care about anything--except he always seems to know what Dephon's grades are. Until one day, a strange woman shows up and all of a sudden, things start changing.

This is the first book in an exciting series--and I don't want to say too much because of the fear of spoilers. I CAN say, though, that I can hardly wait for the next book to come out.

The story flows well--and there are plenty of twists and surprises in store. The relationship--the tension and issues-- between Hyalee and Singleton was exceptionally well-done and believable---to the point you wonder if they really ARE going to make it, even though there's evidence that they did right from the beginning.

The book stops at a climatic point--be aware that this is very much the first book of a series and nothing is resolved at the end. If you're a reader who is bothered by this, you might want to wait and read it when the whole series is out.

The book is a great new read and I'm going to recommend it for any age group who is interested in a good story about the struggle between good and evil.

A scream rippled through the emerald-green sea. “You’ve got to be kidding me,” Singleton groaned. I sighed deeply, trying to remain composed. Another scream pierced our ears, this one coming from a different direction. Within seconds the horizon was filled with no less than twenty of the slug-like creatures traveling with chilling military-style precision towards us. They were all swimming from different directions, their eyes flickering in the distance.

“I'm losing too much blood as it is. I’ll never make it back and who'll avenge my mother? Get out of here. I will not watch you die too! Do it now, Hyles!”

“Would you leave me?” I challenged him, racking my mind for a course of attack.

I gripped my sword awkwardly in my hand as I tried to keep Singleton afloat with the other one. “Hyles, just go or we’ll both die.” The creatures were close enough for us to see their rattling teeth. The combined effect of their screams was enough to shatter our eardrums. “Hyles, go!” he said again. The creatures were no more than eight feet away, and it was clear that neither of us was getting out of here alive.

Folami and Abeni Morris are a sister-sister writing team. Together they wrote (and rewrote) The Exemeus series, somehow managing to accomplish it without murdering one another. Despite their facial similarities, tendency to finish each other’s thoughts and stick up for each other constantly, no, they’re not twins and thus deserve their own individual bio.

Folami grew up in the tiny city of San Mateo, Ca, where nothing ever happens and no one ever leaves. She went to Xavier University for undergraduate, getting her B.A in physics and her B.S in Biology. After graduation she returned to California, to live in an even smaller city, where even less happens, Antioch, Ca. During this time she escaped the monotony by hanging out with her imaginary friends Hyalee and Dephon, and by writing the Exemeus.

She finally escaped to Queens, NY, and now realizes that quiet and tiny aren’t so bad.

As luck (and logic) would have it, Abeni grew up in the same tiny little town as her sister, then she too escaped to the tinier town of Antioch. She has yet to leave. She received her bachelor’s degree in early childhood development from Cal State East Bay. She is the mom of two amazing kids, who swear that they deserve a percentage of the book proceeds and a ton of the credit. At least she raised dreamers.