Bekka of Thorns by Steve Shilstone - Review and Giveaway 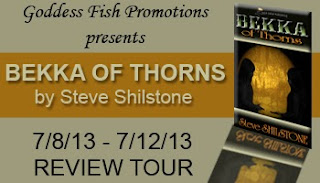 This review is in conjunction with the author's virtual book tour with Goddess Fish Promotions. The author will be awarding a $10 GC to Wild Child Publishing to a randomly drawn commenter during the tour. Click on the tour banner to see the other stops on the tour.

On the fantasy world of Boad, Bekka and Karro of Thorns, a pair of 10-year-old bramble hedge-dwelling maidens, dare to leave the tunnels and bowers of home to seek adventure, a rare occurrence among members of their clan, who stick close to the hedge and fear open spaces. Bekka and Karro consider themselves to be misfits and are bonded as dearest friends. They speculate about the identity of their parents, a piece of knowledge kept hidden from all hedge-dwellers. Karro is known throughout the hedge as a silly clown. Bekka, ever watchful, never chatty, is called Silent Bekka by all. Bekka, who narrates the story, is determined to find the lost underground city of Rumin and to meet her share of mythical creatures, but she is afraid to go alone. She talks Karro into accompanying her. When they step outside the hedge, they have no idea that their adventure traveling through the Woeful Wanderers’ Wasteland will uncover a wonderful secret about one of them.

My Review: Bekka of Thorns is a perfectly charming story about creatures who live for stories--they absolutely love them. But, Bekka and her best friend Karro never realize that they would one day be living in their very own story-- a story that will bring exciting news to both of them.

The author does a wonderful job in creating the world of the hedge-dwellers--Bekka, the narrator, is writing the story in English--not her native language--and sprinkles the narrative with words and phrases in her own tongue. The characters that populate this world are as richly drawn as the language.

The interaction between Bekka and Karra was also fun--I really liked the character of Karra and her silly ways. And, I'm glad there are more books in this series--it will be interesting to see what other adventures these two get up to!

We went to the shop where we apprenticed, repairing tambourines. Zinna, our teacher and Mistress of Construction and Repair, left a note telling us she was off forging chanks in the tunnel foundry beneath the hedge. Kar and I got to work. I assembled chanks on pin dowels and attached ‘em to the rims. Kar stretched the membranes, tucking and fastening. Later on we would gloss and ribbon. As we worked we talked like this:

“Tell me now. Did you really? Out to the Roamer hut?”

“I did. All the way! Outside the hedge! The books! I got ‘em! I read parts. How to make the ink, the purple ink, was there. The oat parchment recipe! I saw it. The other book… It had the language of the world down the Well. Roamer Harpo’s book straight from the Gwer drollek story! He held it in his hands! He learned how to write the Chronicles … Roamer Lace learned. I will, too! I’m going to learn it!”

“I’ll carry ‘em with us when we go to adventure.”

“We’re going, you and I are going into the W’s Three. We will search for Rumin!”

“Yes, of course leave the hedge. We’ll be like Bandy of Legend. We’ll go and find a story and bring it back and I’ll write it down in the secret language!”

“Bandy did. Aren’t you always doing what nobody ever did? Hopping in circles and reciting tales backward? Didn’t you just a nince ago suck chewed thorns up your nose? Remember when you knitted stockings to wear OVER your highboots?”

“But those things were in the hedge. I’m not brave. I’m a cracked melon. You are the one who went to the hut. I’m the one who pretends to faint. If I went outside the hedge, I would not be pretending. I would faint for true.”

That was when I knew. Truth, I captured her to my dream. Karro’s most favorite stories of all of ‘em were stories like The Repair of Fan Wa’s Clock or The Ledgemoon, stories with Acrotwist Clowns in ‘em, so to say. I knew Kar’s most treasured hope was to see an Acrotwist Clown, even more to BE one, thusly such a better truth. She got quiet when I said “Acrotwist Clowns” and stopped tucking the membrane she was working. It snapped away from the rim and hung limply.

“No one has ever walked into the W’s Three with highboots on the wrong feet and four tambourines sewn to the back of her jacket … No, five … The fifth chonka not sewn, but worn as a hat with ribbons tied under the chin to hold it in place. It has to be held in place, you know, otherwise it will fall off. And wouldn’t that look silly? I could walk on my hands up hills and have room to practice cartwheels without crashing into briar walls. I could hang my red gloves from my ears. Ear gloves. No one ever did that in the W’s Three, I bet …”

I let her go on and on and on. I just nodded and smiled.

Steve Shilstone is a benign elderly hippie lite loon living in Northern California. He fancies himself to be a prosemaker and a dadaist with a small d who enjoys hanging out at the intersection of Humor and Nonsense. In times ago, he was a youth baseball coach for 25 years, a distributor of mail for the United States Postal Service, a stock associate employed by a no longer with us department store, a cartoonist of little note, a painter of littler note, and an anthropology student at UCLA.