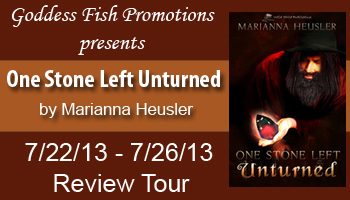 This post is part of a virtual book tour organized by Goddess Fish Promotions. Though it was supposed to be a review tour, I didn't have time to review, but was so intrigued by the premise, I asked to feature the book. Doesn't it sound great!

Leave a comment and be entered to win a $10 Wild Child Publishing GC. You could use it to buy THIS book!

At midnight on July 16th, 1918 Tsar Nicholas Romanov and his family was murdered, thus ending the Russian empire. Historians believe that a peasant by the name of Rasputin was instrumental in the downfall of the dynasty. Because Nicholas thought that Rasputin could cure their son, Alexis, who was suffering from hemophilia, Rasputin was able to influence the Imperial Family.

But what if Rasputin’s power did not come from God, as he claimed, but from a simple jewel, a tricolored, fifteen-carat tourmaline? And what if that very stone landed in the hands of a lonely teenager a century later?

Augusta thought if this were a scary movie, the music would be perfect. And suddenly she saw herself as an actress, staring in one of those slasher films, but that was really scary because those girls always died—

Especially the homely, fat ones.

She approached the third confessional cautiously.

The moment she opened the door, something fell on her, knocking her down, something large and heavy. As it hit the floor with a slight bounce, a great cloud of dust struck Augusta in the face, causing her to cough furiously.

Believing at first it was a statue, that some crazy person had hidden it in the confessional, she reached out her hand. The heap was soft and slightly warm to the touch. As quickly as she could, Augusta crawled away from under the mound, crawled away whimpering.

The cell phone rang again, angry and insistent. Only this time it was below her.

Augusta saw a pair of glasses, shattered on the tile floor.

Then Augusta knew that what had fallen out of the confessional was a dead body.

She began to yell like she had never yelled before, and her screams ricocheted off the high, dome ceiling, thick with cobwebs, and off the stone walls of the crumbling church.

Marianna Heusler is a native of Holyoke, Massachusetts. She graduated from the University of Massachusetts with a BA in English Literature and a minor in education.

The author of over one hundred short stories, her work has appeared in magazines such as Woman’s World, Mystery Time, Calliope, Futures, Writer’s International Forum and Orchard Press as well as numerous anthologies. Her novel Buried In The Townhouse was published by Pendulum Press and was nominated for The Franklin Award.

The Night The Penningtons Vanished is a young adult book, the first in a mystery series, featuring Isabella Ripa. The story takes place in a small town in western Massachusetts and was released by The Larcom Press and nominated for an Edgar. The sequel The Day The Fortune Teller Died was also published

She wrote a young adult novel Angels From The Alphabet and a middle grade fantasy Annabelle’s Monsters.

Hilliard & Harris published her mystery Murder at St. Poylcarp and the sequel Cappuccino at the Crypt. Both books were picked up by Worldwide Mysteries and became part of their book club.

For over twenty years, she taught at all grade levels and has also been a school librarian. Her other careers have included a cosmetic executive, an editorial assistant and a reporter. She is currently teaching third grade in private all girls’ school in Manhattan.

She volunteers for Visible Ink, a program at Sloan Kettering Hospital, which unites professional writers with cancer patients.

She lives in New York City with her husband, Joel and her son, Maximilian.