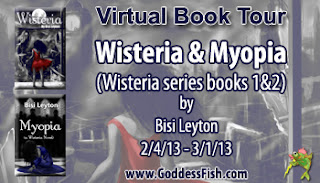 Today we're visiting with author Bisi Leyton on her tour with Goddess Fish Promotions for the dystopian YA Wisteria series, which includes "Wistera" and its sequel, "Myopia". I reviewed "Wisteria" earlier here.

Bisi will be awarding a $15 Amazon GC, so comment today AND follow her tour! The more you read and comment, the better your odds of winning. The rest of her tour stops are here.

Bisi answered many of my prying questions -- thanks!

Considering there are no lockers in Wisteria’s school, she’d carry all her things in her book bag. In it, she’d have a pocket knife, canister of wisteria spray, a flash light and a Chad Pearson comic book.

I loved anything and everything by Roald Dahl. I found is books a refreshing change from the books I was forced to read at school. He really introduced me to the blending of fantasy and science fiction.

I’d like to be able to freeze time without aging.

Not a book my Nintendo DS.

Battle of the Planets, I really loved and still love Jason

Choir, I love to sing.

Sixteen year old Wisteria Kuti has two options—track the infected around the Isle of Smythe or leave the only known safe haven and face a world infested with flesh eating biters. But even with well-armed trackers, things go wrong and Wisteria ends up alone facing certain death, until she is rescued by the mysterious Bach. Uninfected, Bach is able to survive among the hordes of living dead.

Eighteen year old Bach, from a race known as The Family, has no interest in human affairs. He was sent here to complete his Great Walk and return home as a man—as a Sen Son. The Family regard humans as Dirt People, but Bach is drawn to this Terran girl, whom he has never seen before, but somehow knows.

Hunted by flesh eaters, cannibals, and the mysterious blood thirsty group called Red Phoenix, Wisteria and Bach make their way back to the Isle of Smythe, a community built on secrets and lies.

Sixteen-year-old Wisteria has embraced her deep bond with eighteen-year-old Bach, a member of a supernatural race called the Family, despite the risk of his family finding out. Should Bach’s people discover his bond with a human, Wisteria will be guaranteed a painful and bloody death—but somehow, being together is more important.

Their bond is tested when empirics, an elite group of Family investigators, are sent to the Isle of Smythe under the orders of Bach’s father to find artifacts stolen by the humans. They’re to find the artifacts at any cost. Among the empirics is Bach’s old friend, the stunning Alba, who has learned about Bach and Wisteria’s secret relationship, and surprisingly accepts this. With no one else in the Family to turn to, she becomes Bach’s ally and confidant, but possibly more.

As the empirics start to take over the town, Wisteria is torn between trusting Bach and the safety of the humans on Smythe. She soon realizes that she and Bach are on opposite sides of the war between the Family and Humans, and there is no middle ground. One of them must choose a side.


Enjoy an excerpt from "Myopia":

“I promise when I know for certain what is going on, I will tell you and we will help Coles understand, but right now my father has gotten involved and that makes everything more complicated.”

“For one, if he finds out I am communing with a free human.” He shuddered. “I do not know what he would do.”

“Probably not any worse that my mum, if she finds out you’re here right now,” she joked and stopped playing. “She’ll kill you and your dad will murder me.”

Pulling the guitar out of her arms, he put his arms around her.

They’d spoken about the gravity of their relationship a few times, but they’ d never been able to figure a way out that would result with one of them walking away unharmed. The threat wasn’t her mother. Although she didn’t like Bach, since Major Coles had welcomed him into the island, the worst her mother could do was lock Wisteria away.

His father was a different story. Bach’s father was the Sen of the Third Pillar within the Family. He was a powerful leader who on more than one occasion had killed free humans for communing with members of the Family. There was no vice considered more heinous, disgusting and malicious as willingly loving a human. The price of that was blood—human blood.

Both factors resulted in them meeting in secret for the last four months. They settled on the church clock tower, weeks before he’d left for Jarthan.

“Do you want me to tell Coles you’re back?” She stretched herself across the lush rug. “Did you get him a present too?”

“There is a lorry full of ammunition parked at the end of the bridge, leading to town. I am sure Major Coles knows I have returned. I also brought him some medicine he said the hospital needed.” He pointed at several white boxes which sat in the corner.

“Bullets and pills,” she murmured. “Nice. Anything for my mum?”

He looked at her as if she were insane. “She would shoot me in the face if she ever saw me. The only reason she would not torture me is because I saved her life.”

“So basically, you’re saying my mother isn’t good enough for a present?” She glared at him.

Rubbing his temple with his right hand, he tried to explain. “Listen—”

Laughing, she hugged him from behind and laid her head against his back. “I’m joking.”

“That is not funny.”

She kissed the back of his neck, and then lay back down.

“Your mother is…” He turned to talk to her and saw her adjusting her skirt over her legs.

He was taken aback by how beautiful she was. Many people, human or Family, couldn’t see it for some reason, but she was the most beautiful woman he knew.

She finally noticed his stare and bit her plump bottom lip. “What’s wrong?” Frowning, she sat up.

He shook his head. The thoughts he was having were not something he could share with her.

“Are you all right? You’re completely red and you never turn red.” She touched his face tenderly.

It seemed to burn him and he backed away. “I am fine.” The images in his mind changed to what he’d like to do with her. He wondered how many escorts she’d had and what it would be like for him to really love her.

More pictures flashed through his mind and some didn’t make any sense. The last one was of him and the Seven Elders standing over the cliffs overlooking the Astolat River, as his brothers tried to drown a tanned half-human half Famila baby—Their baby. Did this actually occur and he was just now remembering it, or was it a fear he had harbored, should they ever conceive a child? “I have no intention or interest in a physical relationship with you,” he abruptly blurted out. Nothing good could come of anything like that happening between them.

She gave him a blank stare. “Okay.”

“You mentioned earlier that we had not talked about something. I am guessing that is what you meant.”

“It cannot happen between us,” he replied. 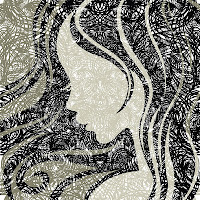 Bisi Leyton was born in East London in 1978. She grew up in London, Nigeria and the States, listening to the stories life and love from aunts, cousins and big sisters.She lives in London, but has worked around Europe including France, Germany, Ireland, Belgium and the Czech Republic. She has a fondness for reading graphic novels.